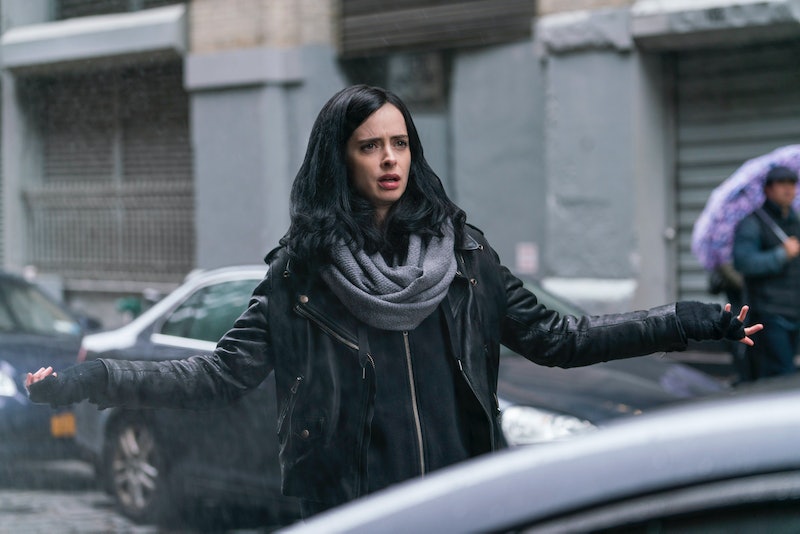 Through four original series, Marvel's Netflix catalog has been building to one big superhero team-up. The Defenders is premiering Aug. 18, bringing Luke Cage, Jessica Jones, Matt Murdock, and Danny Rand together in one common fight. With the crossover on its way, it's time to brush up on backstories — so, what happened to Jessica Jones before The Defenders? Short answer: A lot.

Longer answer? Oh, you know, she just defeated her psychopathic, mind-controlling rapist, all while a) struggling with PTSD and alcoholism; b) maintaining a ride-or-die friendship with Trish Walker; c) working as a private eye; and d) getting into a hot and heavy (and emotionally fraught) relationship with fellow superhero, Luke Cage. That’s Jessica Jones Season 1 in a nutshell, but I'll break it down a little further so you can be better prepared for meeting her again in The Defenders.

To boil things down to the essentials, most of the series encapsulates a twisted, super-powered game of cat and mouse between Jessica (Krysten Ritter) and Kilgrave (David Tennant). She uses her knack for investigating to track him down and exploit his weaknesses, but he (almost) always manages to stay several steps ahead of her — mainly by blackmailing her and forcing people to kill themselves (and, of course, turning literally every person in her life against her at various points in the story). His pursuit of her makes many stops along the way. At one point, Kilgrave makes an elaborate show of buying Jessica's childhood home and promising to use his mind control for good. At another, she traps him in a soundproof cell filled with several inches of water — all the better to electrocute him with. The body toll goes into the dozens, with Kilgrave indiscriminately murdering people left and right to get to what he wants: Jessica Jones.

In the end, it’s through Kilgrave’s own complacency that Jessica is finally able to defeat him: He’s got her best friend/adopted sister Trish Walker as the ultimate bargaining chip, and as such, he thinks he has Jessica in a checkmate. And that's precisely when she surprises him — by faking her love for Trish as love for him and then snapping his neck with her bare, super-powered hands.

Of course, that's not all that happens over the course of the story, even though it is the primary plot: There’s the storyline where it turns out that Jessica’s lovable junkie friend Malcolm was turned into an addict by Kilgrave, who gives him drugs in exchange for spying and taking photos of her. There are the creepy fraternal twins next door who seem vaguely incestuous, until the male sibling slashes his own throat at Kilgrave’s bidding. There’s the Captain America knock-off cop that Trish strikes up a relationship with, only for him to go full-on super toxic masculine soldier on her.

There’s also Jessica’s ultra-competent boss Jeryn Hogarth (who later makes an appearance in Daredevil Season 2, as well as Iron Fist), who almost gets killed by her ex-wife in a especially sadistic Kilgrave-engineered manner. Heck, there’s even the tragic story of Hope, a young college student who spends time pregnant and in jail after Kilgrave forces her to murder her own parents (in an even more sickening twist, he uses stem cells from her medically-aborted fetus to amplify his own superpowers).

Most of the season featured Jessica living through what appeared to be Post Traumatic Stress Disorder, often depicted through the show’s use of flashback. And while she’s certainly gotten some closure on the childhood trauma of her parents' death, it’s not exactly as if she spent the season healing. (Though who knows what's happened since fans last saw her — though a reference in Iron Fist suggests that Jessica is still operating Alias Investigations and drinking.)

Yes, killing Kilgrave was clearly the only option for dealing with him permanently, but the memory of twisting his head into oblivion doesn’t exactly seem like the kind of thing that will help Jessica sleep at night, without the help of straight whiskey. Chances are, Jessica will still be working through her issues in The Defenders.

There’s also her relationship with Luke to contend with — it was complicated as all heck, and will be made even more complicated by his new relationship with Claire Temple, which was explored in Luke Cage. Remember, Kilgrave had forced Jessica to kill Luke’s wife, which lead to a pretty huge fracture in their relationship (not to mention the fact that she knew about his wife when she first slept with him, and was spying on him to boot). Their last meeting was also marred by the fact that she had to shoot him in the face with a shotgun while he was under Kilgrave's control (luckily, his bulletproof skin and the careful, quick-thinking work of Claire Temple ensured his survival). Even so, actor Mike Colter has hinted that a Luke/Jessica reunion is in the cards — though it's worth pointing out that in a Luke Cage Easter egg, Jessica's referred to as his "rebound chick."

More like this
Netflix Shut Down 'Bridgerton' S3 Rumours About A “Very Dark” Storyline
By Bustle
'The Last Of Us' Has Officially Been Renewed For Season 2
By Darshita Goyal
Michaela Coel Has Some *Thoughts* About The Nepo Baby Discourse
By Maxine Harrison
'The Traitors' Is Officially Being Turned Into A Board Game
By El Hunt
Get Even More From Bustle — Sign Up For The Newsletter
From hair trends to relationship advice, our daily newsletter has everything you need to sound like a person who’s on TikTok, even if you aren’t.