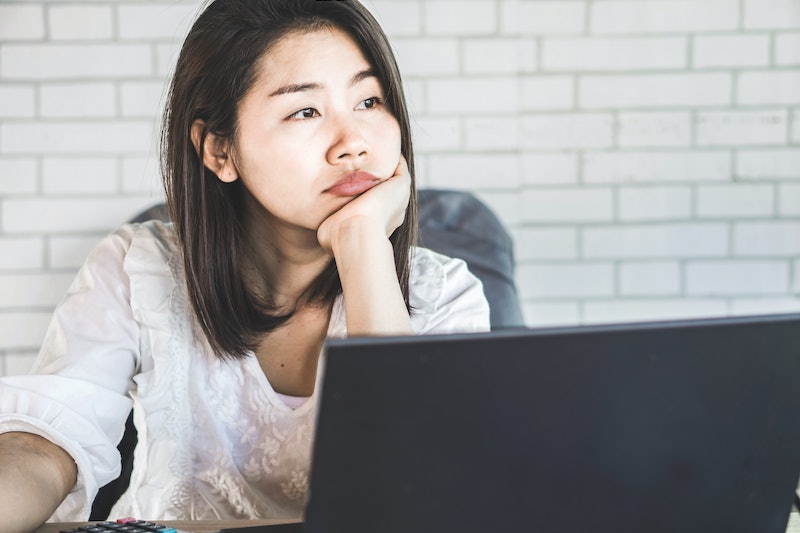 Picture it: you're sitting at your desk, lots of work in front of you, when suddenly your eyes glaze over. For five minutes (or was it only 20 seconds?) you stare blankly into space, thinking about nothing in particular, or nothing really at all. Then suddenly you snap out of it, and realize you just zoned out.

It can be a weird experience to "space out" or leave reality for a brief period of time. So why does it happen? And what's really going on in the brain when you zone out? Well, in many ways, this momentary mental vacation serves as a preservation tactic; one your body can tap into whenever it's overwhelmed.

"Zoning out is seen as an old brain function for survival, similar to our fight-flight responses," Lily Ewing, MA, LMHCA, a Seattle-based therapist, tells Bustle. "There’s actually a third survival instinct which is to freeze when there’s no way to fight or flee our way out of the threat. Instead, our bodies and minds opt to partially shut down in order to survive."

Of course, on the average day, you probably won't need to actually fight, flee, or freeze, "but we respond in these ways to the smaller 'threats' of modern life," Ewing says. "Things like stress, boredom, and fatigue might register as threats to the happy equilibrium we’d like to be at on a given day."

Cut to you zoning out in a stressful meeting at work, where you might need a quick mental break, "or when you’re tired [...] you might notice that your brain just chooses to check out for a bit," Ewing says. Since you aren't going to fight off or flee from these stressors, the only option left is to freeze, and enter into that fuzzy-headed, blank mental state.

And it's all stemming from deep inside your brain. "The fight-flight-freeze response is largely decided in the amygdala, the center of the reptilian brain that deals with survival and emotion, but not consciousness or thought," Ewing says. "When we freeze to survive, it impacts the amygdala and the entire nervous system responds in a way to conserve energy resources by slowing heart rate and breathing, and partially shutting the body down."

It's a natural response to stress, she says, and one that we share with animals. But however weird it may seem, it's not something you really need to worry about. "Zoning out is typically not a sign of serious mental health concerns," Ewing says, "but if you find that you’re zoning out frequently to the point that it impacts your social, work, or emotional life, it would be a good time to check in with a mental health professional." The same is true if you're having racing thoughts, which aren't the same thing, and may require a closer look.

"We all space out now and then," Dr. Catherine Jackson, licensed psychologist and board-certified neurotherapist, tells Bustle. But for folks with certain health issues, including anxiety and depression, it may be more likely. Anxiety, for example, can cause you to get caught up in a mental feedback loop of worried thoughts, that can make it difficult to concentrate.

That said, the occasional space out session can actually be beneficial, as it allows your brain to "process and think through some important things and think of creative or great ideas," Jackson says. If you've ever gone into a fugue state while huddled over a project at work, then you know these moments not only provide a much-needed think break, but they may also result in genius solutions to problems.

It all depends on the situation though, so if it feels like your brain is letting you down, you may want to make a few changes in order to see some improvement. Apart from asking a therapist for advice, "you might find that you zone out less if you’re sleeping, eating, and exercising in a way to support your physical and mental health," Ewing says. It's all about giving your body what it needs in order to better manage stress, so your brain doesn't feel like it needs "survive" by freezing, and zoning out.