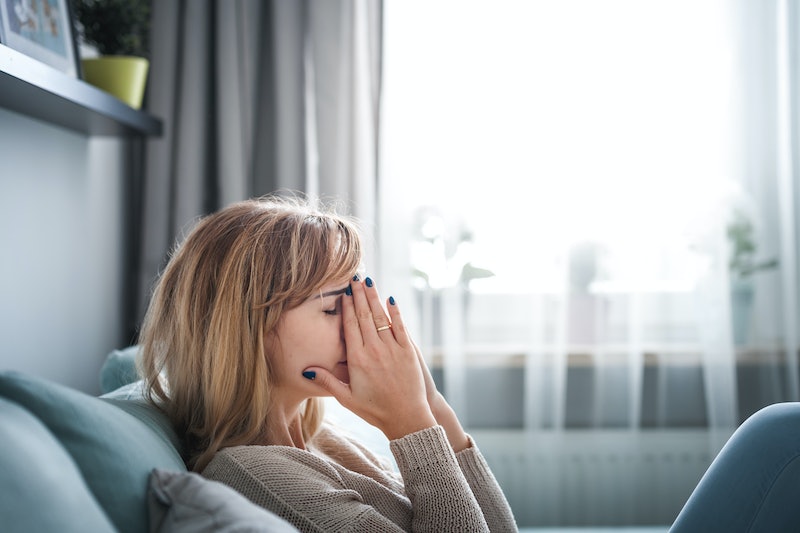 Between the tension that builds when a problem is brewing, to the heated disagreement that later unfolds, it's really no wonder arguing with your roommate can impact how you feel. Whether it's about bills, chores, or late-night noise, "arguing in and of itself is not necessarily stressful on the body," Dr. Jamie Long, a licensed clinical psychologist at The Psychology Group Fort Lauderdale, tells Bustle. But if emotions are running high, she says, and you're both interpreting the argument in a negative way, the stress response will activate.

"The sympathetic nervous system is responsible for preparing the body to handle a threatening stressor," Long says. "During an argument you will likely notice increased heart rate, pupil dilation, increased sweat production, and shallow or quick breathing patterns. These symptoms occur because the body is preparing you to fight or flee whatever threat you are facing."

Even though you're not actually in any danger, and are simply standing in the kitchen having a tough conversation, it's all the same to your body. If you're sensing tension from your roomie, aren't sure how to talk about these things, or if you're upset and/or raising your voices, it'll be perceived as threatening. And you'll have a pounding heart and sweaty palms as a result.

Roommate arguments can also take a toll on you emotionally. And this is especially true if you're having ongoing conflict in your home, as that can create a toxic environment that you just can't get away from, Heidi McBain, MA, LMFT, LPC, PMH-C, a licensed marriage and family therapist specializing in women's wellness, tells Bustle. You wake up to tension, and come home to tension, and that can create feelings of worry and anxiety. Eventually, it can even start impacting how you feel in other areas of your life, McBain says.

The trouble is, roommate arguments can get stuck in a vicious cycle. Once you're both upset, it can make it difficult to talk about whatever's going wrong, which can lead to more stress. "This heightened level of anger may make it hard to clearly state what’s bothering you in a helpful way," McBain says. And on and on it goes.

Living with other people is tough, so you and your roommate(s) will likely have an argument or two, and that's OK. But conflict doesn't have to keep occurring, and it certainly doesn't have to continue impacting you in a negative way.

Of course, the best way to prevent emotional arguments, and all the resulting stress, is by smoothing over problems as soon as they arise. "Try to talk about what’s going on and how you're feeling early on, before things escalate to anger," McBain says. Create a house rule that you'll be honest with each other, and agree to the best way to communicate. Can you have roommate meetings? Or get a group text going? Find what works best for everyone, so that problems don't fester.

It can also help to get better at assessing what a true problem might look like. As Long says, "Sometimes you can let things go simply because you understand that not everyone will be just like you. Ask yourself if you can live with the problem or if it truly needs to be addressed." Many fights can be avoided by going with the flow and being a little more understanding. For instance, if you find yourselves constantly arguing over dishes, it can help to agree to disagree, and be more flexible when it comes to messiness.

If you truly can't stand one of your roommate's quirks, or if there's a major issue going on, finding a way to talk about it in a civil way is the best course of action. "When bringing up a conflict, avoid describing your roommate and all they did wrong," Long says. "Most folks get defensive when they feel criticized. Instead, describe the situation and how it effects you." State what's happening, Long says, and then describe how it makes you feel, then ask how you might be able to address it going forward so everyone's happy.

"If a conflict does blow up into a stressful argument, know when it’s time to take a break," Long says. "A big mistake people make is not taking a break when someone is flooded by their body’s stress response. When we’re overwhelmed by the sympathetic nervous system it becomes very hard to have constructive conflict because the overwhelm reduces our communication abilities."

So instead of yelling at each other, part ways until you can cool down. "We are much more likely to say something we don’t mean [when stressed]," Long says, "so it’s best to take a break with the agreement that you two will come back a little later to try again." By coming up with rules like these, you should find it much easier to talk to your roommate and hash out your differences, without experiencing an onslaught of negative, stress-related symptoms.