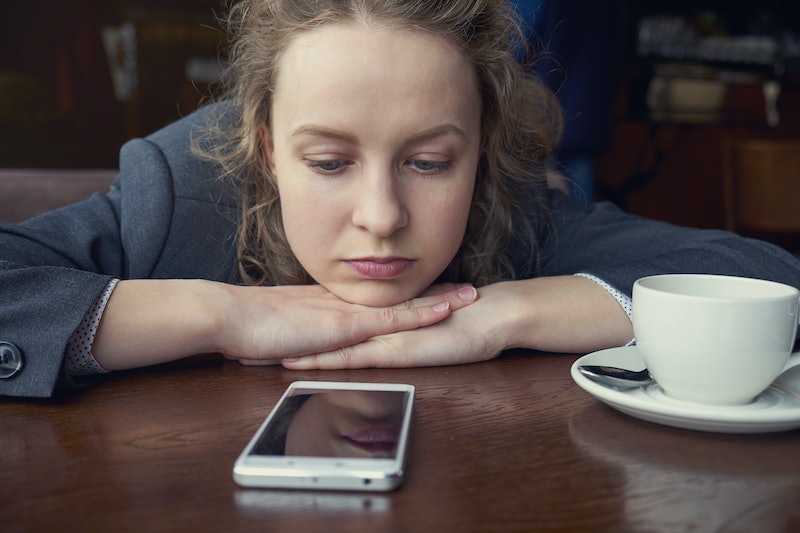 If the text you expected to receive never comes, and you start to realize you've been ghosted, it can leave you feeling like nothing in the world makes sense. You go from a budding relationship to radio silence, without so much as an explanation. And it's this abrupt change that can quite literally impact your brain.

When you get ghosted, it immediately triggers a stress response, Michael Ceely, LMFT, a licensed psychotherapist, tells Bustle. A potential partner all but disappearing is a shock, and one that will undoubtedly leave you wondering what happened. "You immediately go to worst case scenarios," he says. "'[They] doesn't like me anymore' or 'I must have said something wrong to [them]' are just a few of the conclusions that you might jump to without sufficient evidence."

And since stress decreases blood flow to the prefrontal cortex of your brain, Ceely says, where rational thought occurs, it might even feel like you're having trouble thinking clearly. So if you quite literally don't know how to process the sudden lack of contact, that's why.

Perhaps worst of all, though, is the fact ghosting can also trigger feelings similar to fear. "Ambiguity is often perceived as a 'threat' that goes to the amygdala part of our brains," Dr. Marni Feuerman, a licensed psychotherapist and author, tells Bustle. "Therefore, a danger cue, such as being ghosted, naturally gives rise to fear and anxiety."

Typically, when a relationship ends, you get some sort of explanation. But with ghosting all you receive are nonverbal cues that someone is no longer interested, like the lack of texts, Lauren O’Connell, LMFT, a licensed marriage and family therapist, tells Bustle. And to your brain, that's a big problem. "Being ignored and abandoned is one of the most painful experiences for humans," she says. "We are relational beings who can only survive with each other, and when we feel left it can activate basic attachment fears."

Once rejected, the natural reaction is to try to explain why it happened. But again, without your would-be partner's input, it isn't going to be very accurate. "We don't do well with vagueness or a lack of explanation," Feuerman says. "People often take being ghosted personally in an attempt to understand it. The stress comes from feeling unlovable, worthless, or unattractive after getting ghosted," or however else the situation might end up attacking your self-esteem.

While you will be OK, and you will be able to move past being ghosted, it might not feel like that right away. "Being ghosted is very stressful, emotional and physically," O'Connell says. But that's why it's so important to take have a game plan for moving on.

"The best way to overcome being ghosted is to keep the rational part of your brain online," Feuerman says. "Check the facts. Remember, you have control over your thoughts and perceptions and are able to re-frame the situation." This is something you may be able to come to all on your own, once the shock wears off.

After all, "you really have no proof you got ghosted because of something you did or because of some negative traits you have," Feuerman says. "There are any number of reasons this could have happened that have nothing to do with you." And remembering that can come as a quite the comfort, especially if you've been blaming yourself.

That said, if you are struggling to process what happened, don't hesitate to reach out to friends, O'Connell says, or even a therapist. Make plans and do something fun, so your mind can focus on something else. Ghosting isn't easy to deal with, but it happens to pretty much everyone, and with the right support, is something you can quickly overcome.