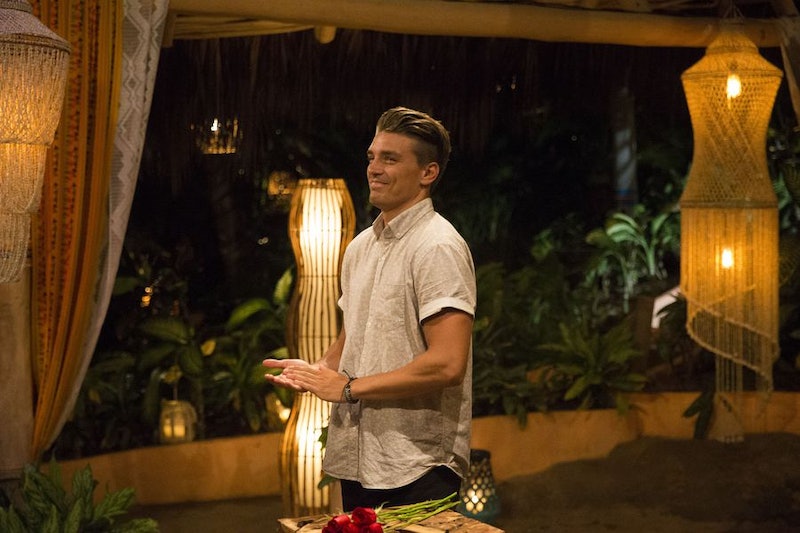 Dean Unglert learned a lot from his time on Rachel's season of The Bachelorette. Besides opening up about his unconventional family life and being vulnerable with another human, Dean also learned that his adorable nature made him a shoo-in for more television — hence how he ended up on Bachelor In Paradise. He's tried to find a love in Mexico, but what is Dean doing now after Bachelor In Paradise? Is he happily engaged?

Well, it seems like Dean blew any goodwill that fans had toward him on Bachelor In Paradise. What happened to the kind, sweet Dean we met a few months ago? BiP introduced the world to player Dean, and it's not a good look. He started out dating Kristina, but then Danielle L. came in and he wanted to date her. So he went out with both women, committing to neither and trying to see how things went.

In any case, Dean's life doesn't seem all that bad right now. In doing an internet search (the women of America are mad at you, Dean, FYI, as is Evan Bass), it looks like he's settling back into home life as best a reality contestant can. He's certainly made a lot of new friends over the past year or so. Just look at this group pic:

Dean and the men of both The Bachelorette and Bachelor In Paradise seem to have bonded fairly quickly, so that's nice. It's great to bring friends out of that experience, since we all know the chances of actually finding love are slim to none. And did Dean find love? I couldn't find any real examples on his social media in relation to who he's currently dating, but isn't that to be expected? Why blow the whole end of Bachelor In Paradise for a dumb social post? Dean did tell Glamour recently, "Did I find love in Paradise? Yeah, I'll be honest with you. I did find love in Paradise. Yeah. I don't see any need to hide it," but it's unclear if that lasted.

Some more examples that life for Dean post-Paradise is similar to that of pre-Paradise? He's tweeting up a storm about random things (stars! They're just like us!), including his new fantasy football team (he likes the Broncos, FYI).

He also had a lot of opinions on the recent boxing match between Floyd Mayweather and Conor McGregor fight:

And, of course, Dean is talking about how much he loves dogs, including his own fur baby, Nala.

He really loves dogs, and I bet that he's mad that Ben Zorn got the "obsessed with my dog" edit on Bachelor In Paradise.

Guys, is Dean really just all of us? I don't know if it's his age, but Dean really seems like the Bachelor contestant I'd be most likely to know in real life. His post-Paradise life shows that things have basically gone back to normal (with a lot more Twitter followers).

More like this
Bachelor Nation's Blake Horstmann Is Dating 'Love Is Blind' Star Giannina Gibelli
By Jake Viswanath and Radhika Menon
RHOA’s Kenya Moore Said Her Friendship With Marlo Hampton Is “Too Far Gone”
By Brad Witter
The Bachelorette’s James Adds Another Weird Occupation To The Franchise
By Kadin Burnett
Yes, You Can Really Charter Below Deck Med’s New Superyacht, Home
By Brad Witter
Get Even More From Bustle — Sign Up For The Newsletter