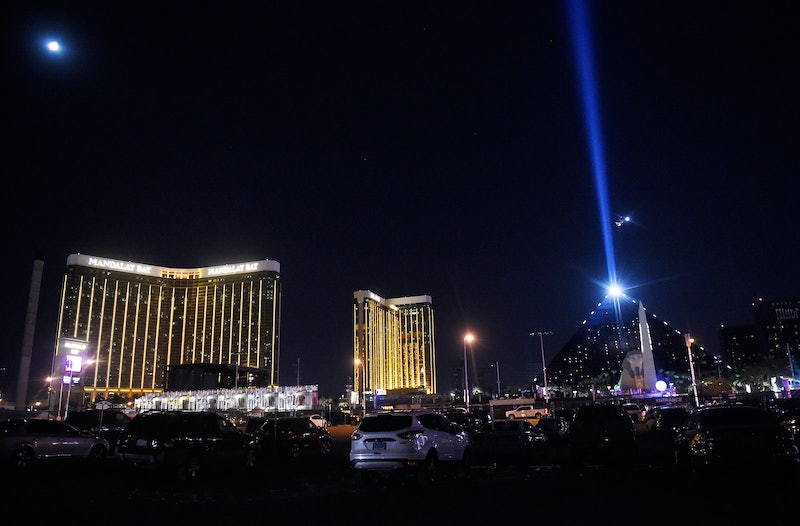 Many people woke up to absolutely horrifying news this Monday morning about the tragic mass shooting in Las Vegas, and we're all still processing the many disturbing details as they come out. It's known that over 50 people died and 200 were injured in the attack (which is not being called terrorism at this time), and that the shooter fired at attendees of the Route 91 Harvest Festival from the Mandalay Bay Resort & Casino.

Information is still coming in and likely will continue to arrive throughout the coming days, but what's known so far is that Las Vegas police shot and killed the individual responsible for the shooting. The tragedy occurred as country star Jason Aldean was performing as the closing act for the festival, which lasts three days. The shooter hit people at random, firing out of the window of the Mandalay Bay hotel, which was nearby. Police later found the shooter in the hotel, used a controlled explosion to break into his room, and shot him dead.

The attack is being called the deadliest mass shooting in U.S. history, and millions of people are horrified by the nature of the events and toll on human life. For those familiar with Las Vegas, the fact that the setting used for the shooting was the Mandalay Bay is chilling. The hotel is one of Las Vegas' famous luxury resorts and casinos, located directly on the Strip. It's 43 stories (the shooter reportedly was located on the 32nd floor), and contains two smaller properties, the Delano and the Four Seasons Hotel. There are 24 restaurants at the resort, including Border Grill, Red Square, and Mizuya.

Like many hotels in Las Vegas, the Mandalay is known for its productions, which recently have included Michael Jackson: One by Cirque Du Soleil. Mamma Mia! at Mandalay Bay was heralded as the most successful Broadway show to play in Vegas by the Las Vegas Sun, and it was then followed after 2009 by Disney's The Lion King. Michael Jackson: One by Cirque Du Soleil has only been open since 2013, but, in that time, but the website proudly proclaims it as an "electrifying fusion of acrobatics, dance and visuals that reflects the dynamic showmanship of the King of Pop." Mandalay Bay is also famous for its Events Center, which has played host to both the Miss Universe pageant in 2010 and the Latin Grammy Awards in 2013. And, of course, the main building contains the House of Blues, a well-known restaurant and music venue.

Though not held at the House of Blues, he Route 91 Harvest country music festival, during which Jason Aldean was performing, was the fourth annual of its kind, which has been hailed the "neon sleepover." In addition to Aldean, Sam Hunt, Eric Church, Lauren Alaina, and Maren Morris were also among those who were performing or had performed. The festival was taking place at Las Vegas Village, which was serviced by numerous properties including the Mandalay for concert goers who wanted to attend more than just one night. It seems particularly horrifying for the shooting to have happened during an event that was meant to be uncomplicated fun for people who flew or drove out to attend it, and the attack has already launched a fresh conversation about the need for tighter gun control in the United States.

The details of the shooting are devastating, and those both on the ground in Las Vegas and watching with horror from home are likely at a loss for what to do and how to help. If you're located in Nevada around the area of the shooting, please donate blood to Las Vegas victims, as blood banks are in desperate need.

More like this
Olivia Rodrigo’s Song Dedication To 5 SCOTUS Justices Sent A Strong Message
By Grace Wehniainen
For These Abortion Clinic Volunteers, Going TikTok Viral Is A Risk Worth Taking
By Audra Heinrichs
5 Ways To Stand In Solidarity With Women In America From The UK
By Sophie McEvoy
How To Fight For Reproductive Rights, Based On How Much Time You Have
By Courtney Young
Get Even More From Bustle — Sign Up For The Newsletter