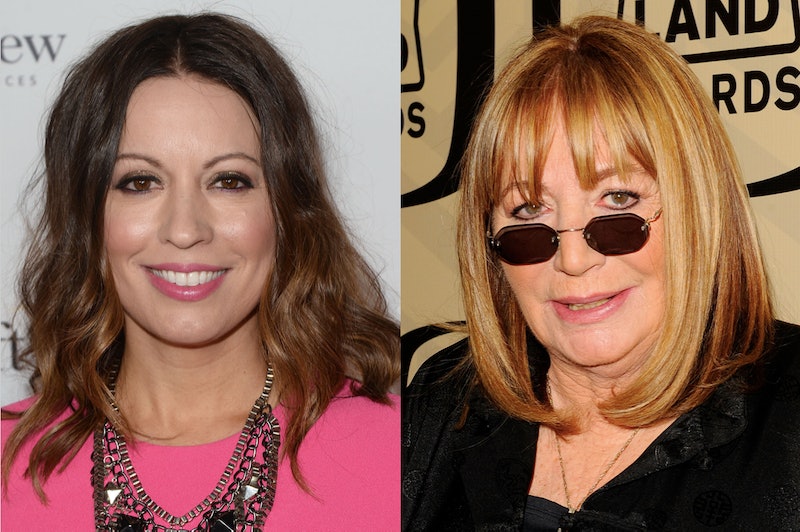 When the news was announced on Dec. 17 that Penny Marshall had died, countless people posted tributes honoring the legendary actor and director. There were the fans who'd grown up watching her movies, the former colleagues who remembered her fondly, and, perhaps most movingly of all, the female filmmakers who'd been inspired by Marshall's work. From Ava DuVernay to Gina Prince-Bythewood, a sizable number of movie-making women movingly expressed their appreciation for the icon — including writer/director Kay Cannon, who tells Bustle that Marshall's classic comedy A League of Their Own directly inspired her own blockbuster movie series, Pitch Perfect.

"It greatly influenced Pitch Perfect for me, seeing a movie where there were a bunch of women who all had different character traits that made them funny and unique in different ways," says Cannon, speaking over the phone a few days after Marshall's death. The writer behind the franchise (she also produced the latter two films) even crafted an ending for Pitch Perfect 2 that was practically identical to A League Of Their Own's finale, featuring a photo of the group that transitions to an actual photo hung up in a gallery.

"I remember the producers were like, 'Uh, it’s a little too emotional at the end, we want something that’s like a harder joke ending.' And I was like, 'Well, then you guys come up with it, because I want to do this," Cannon recalls with a laugh.

"I was so in love with A League Of Their Own and I wanted to pay homage to that movie and how much it influenced my work," she continues.

Like so many others of her generation, Cannon, 44, grew up watching Marshall star on ABC's Laverne & Shirley, delivering physical comedy bit after bit alongside Cindy Williams. "It was so refreshing for me, as this young girl who was interested in comedy, to see those two people," Cannon says now. She became so passionate about the show, she adds with a laugh, that she even chose to call her daughter Lenny, after Michael McKean's goofy character.

But it was Marshall's work as a director that's influenced Cannon the most. For "years and years and years," she says, she'd watch A League Of Their Own whenever it came on TV, admiring both its pathos and its hilarious, female-led ensemble (Geena Davis, Rosie O'Donnell, Madonna, Lori Petty... just to name a few). "It was the first time I ever saw more than one woman doing bits. They did straight up bits! And you remembered all of them," explains the filmmaker.

Marshall's other movies, like Big and Awakenings, also struck a chord with Cannon, and when she was gearing up to direct her 2018 hit Blockers, she looked to Marshall's Jumpin' Jack Flash — accidentally. "I did a bunch of research on how many women have directed rated-R studio- released movies, and [discovered that] Penny was one of the first," recalls Cannon. "She was so influential to me, but I didn’t even realize... I was like, 'Oh my gosh, here’s this woman who I’ve watched all those years as a kid, who greatly influenced me... and then when I’m looking up women who’ve directed rated R movies, it’s like of course she’s on that list, and of course I didn’t know about it. Not enough people are talking about her!"

Marshall, Cannon believes, was tragically underrated in her lifetime, and one look at the general Twitter response after her death — "she made that too?!", "Her movies made how much money?!" — seem to confirm that. Despite the filmmaker being the force behind several beloved and highly successful movies (including Awakenings, an Oscar Best Picture nominee, and Big, the first female-directed film to make more than $100 million domestically), Marshall was never talked about with the kind of reverence she deserved, according to Cannon.

Perhaps, she says, it was because of the success of Marshall's filmmaker sibling Garry (Pretty Woman, Happy Days, etc). "I think her brother overshadowed all the work that she did," theorizes Cannon, adding that she thinks many people might even erroneously believe it was Garry, not Penny, who directed A League Of Their Own.

But Penny has a legacy of her own absolutely worth revisiting. Says Cannon with clear exasperation, "She does this classic sports movie, she does this classic comedy for all ages, and then she does a dramatic Oscar-nominated film — it’s just like, what couldn’t she do? And she did a rated-R movie, when women weren’t doing that!"

Decades later, though, women like Cannon are doing just that, proudly following in Marshall's footsteps. And they don't take her groundbreaking resume and influence for granted. "What was so wonderful about her is that... there was just this sense of honesty," reflects Cannon. "She just was herself and she was honest, and that’s why her work transcends decades and time."

More like this
At 28, Rosie Perez Risked Her Career To Stop Playing Stereotypes
By Gabrielle Bondi
Rupert Grint Just Shared A *Major* Update About Ron Weasley’s Future
By El Hunt
Twitter Is Overjoyed By Angela Bassett’s Record-Making Oscar Nomination
By Maxine Harrison
Anne Hathaway Shared A "Thrilling" 'Princess Diaries 3' Update
By Darshita Goyal
Get Even More From Bustle — Sign Up For The Newsletter
From hair trends to relationship advice, our daily newsletter has everything you need to sound like a person who’s on TikTok, even if you aren’t.