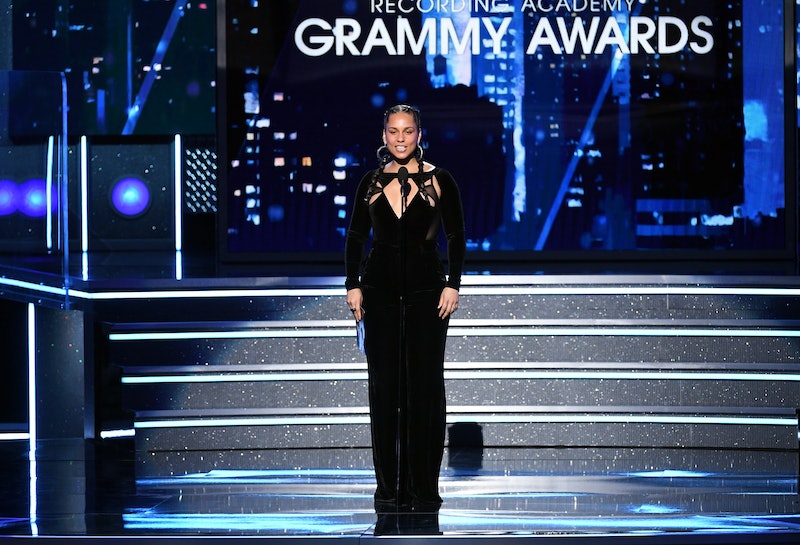 Get ready red carpet lovers because music's biggest night is almost here, and the fashions are going to be everything. You definitely don't want to miss a second of the Grammy show, but what time is the 2019 Grammys red carpet? Sure, the performances are great, but those red carpet looks are equally as part of the show as they are. Hello, remember Lady Gaga's iconic egg entrance? That was a performance unto itself.

This year at the Grammys, some of your favorite — and most fashion forward — artists will be attending. Alicia Keys is hosting, and you know she'll definitely give fans a serious lewk. Of course, who could forget that Janelle Monae is set to perform, and if there's someone who knows how to make a statement on a red carpet, it's her. Did you see her Golden Globes look? Don't forget that Cardi B is both nominated and performing. She'll undoubtedly walk the carpet. Here's hoping for a repeat of how gorgeous she looked last year. Finally, but certainly not least important, with multiple nominations for her song "Shallow," Lady Gaga is also more than likely to make a red carpet appearance.

Basically, the 2019 Grammy red carpet may just be one of the most exciting in the history of the award show. When can you catch it?

According to the Grammy Award website, the show itself is set to air on CBS Sunday, Jan. 10 at 8pm ET. Of course, this means that the red carpet will be earlier in the evening. The official Grammy live stream is being held at the Grammy website and begins two hours before the official show at 6pm ET. However, it's not the only way that you can stream all the stars arriving on the red carpet.

The Grammys are one of the biggest awards shows of the season (its nickname is even music's biggest night), so of course, red carpet coverage will be happening on E! . The network will also begin their coverage of the big event beginning at 4pm ET, so if you've got a cable subscription and really love hearing Ryan Seacrest talk about his line of suits, you can get your red carpet fix there.

Of course, given that the show is actually on a major cable network, CBS will be hosting their own pre-Grammy red carpet show at 7pm ET. However, if you want a bit of extra Grammy goodness, CBS will start their livestream of the event at 5pm ET, an hour before everyone else.

Clearly, there's no shortage of ways to stream the Grammy red carpet or catch it on cable. However, if you want to see everything from start to finish, you need to set your fashion alarm for 4pm ET if you want a bit of extra content and 6pm if you're ready to catch the arrivals. With so many talented (and stylish AF) nominees, the 2019 Grammy red carpet may just be the best one of all of the 2019 red carpet season.