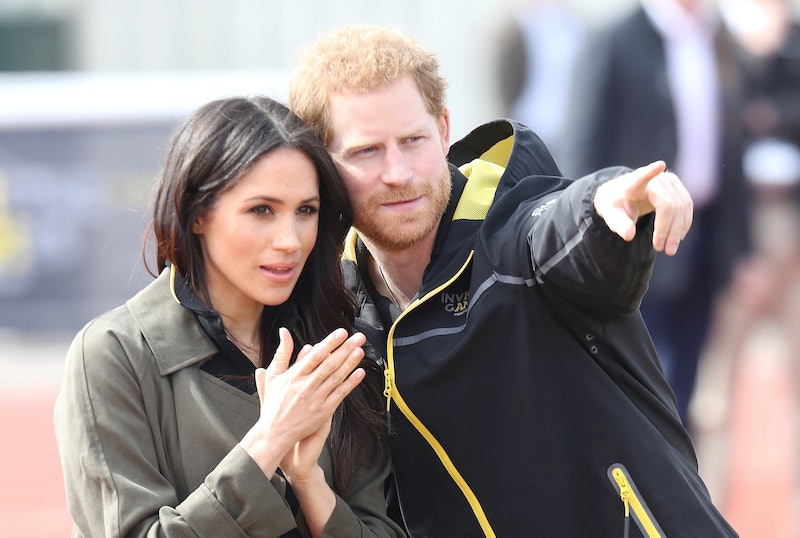 Prince Harry and Meghan Markle have legions of fans the world over. And while most of those fans won't get the chance to see the royal wedding in person at St. George’s Chapel on May 19, there's still a way for them to watch the ceremony. So, what time is the royal wedding on TV in the U.S.? Fans who want to see the event will have to wake up early — royal wedding coverage will start as early as 4:00 a.m. ET.

The royal wedding starts at noon British Summer Time, which is 7:00 a.m. ET. So what will fans see if they tune in earlier than that? Networks like ABC and CBS will start their royal wedding coverage ahead of the event, with on-the-ground footage from what's going on in Windsor and London. And after the wedding ceremony, Prince Harry and Markle will take a carriage procession through Windsor, and that will be shown on TV, too. The carriage ride should start around 8:00 a.m. ET.

Several major U.S. television networks will be showing the royal wedding, so you'll be able to tune in via your favorite channel. ABC and Good Morning America will cover the royal wedding events from 5:00 a.m. to 10:00 a.m. ET, with coverage from Robin Roberts and David Muir. And if you prefer watching online or via ABC's apps, the royal wedding coverage will be shown on ABCNews.com, GoodMorningAmerica.com. There will also be coverage on ABC's mobile apps and social media.

If you prefer NBC and the Today show, that network also has you covered. Savannah Guthrie and Hoda Kotb will host live coverage of the royal wedding for NBC starting at 4:30 a.m. ET. Megyn Kelly, Kathie Lee Gifford, Al Roker, and Sheinelle Jones will also be covering the events for NBC. The network's royal wedding coverage will be live-streaming on Today.com, as well as on the Today show's official Facebook, YouTube, and Twitter channels.

And for fans who are really invested in waking up early to watch Harry and Markle tie the knot, CBS's royal wedding coverage, hosted by Gayle King and Kevin Frazier, will start at 4:00 a.m. EST.

Fans who don't necessarily want to wake up at the crack of dawn on Saturday will still have the chance to watch the royal wedding on TV, though. BBC America will simulcast BBC One's royal wedding coverage from England, but for fans who prefer to sleep in, BBC America will also re-air Harry and Markle's wedding later in the day. The network hasn't announced the exact time for the re-airing, but it's good news for anyone who wants to sleep in.

And while fans can't know everything to expect from the big day, there are plenty of details about the royal wedding that have already been revealed. Aside from the date and location, it's been announced that Prince George and Princess Charlotte will be in the royal wedding as a a pageboy and a bridesmaid, respectively. Those are also the roles they had in their aunt Pippa Middleton's nuptials. There are other details about the celebration that have already been revealed, too, like the fact that Harry and Markle's wedding cake will be lemon and elderflower-flavored.

There's also been plenty of speculation about which celebrities will attend the royal wedding. Markle's friend Serena Williams, for one, may not be able to make it due to her tennis schedule. And the Obamas, along with all other world leaders, weren't invited to the wedding. But that doesn't mean there will be any shortage of star power at the event. Some of Markle's Suits co-stars are attending, Priyanka Chopra will be there, and all five of the Spice Girls might be at some part of the celebration.

Not all of the details about the royal wedding are available, especially as far as the guest list goes, but it sounds like there are plenty of reasons fans will want to wake up early for the event. And, luckily, there are a number of ways for U.S.-based fans to feed their royal fascination on Saturday.