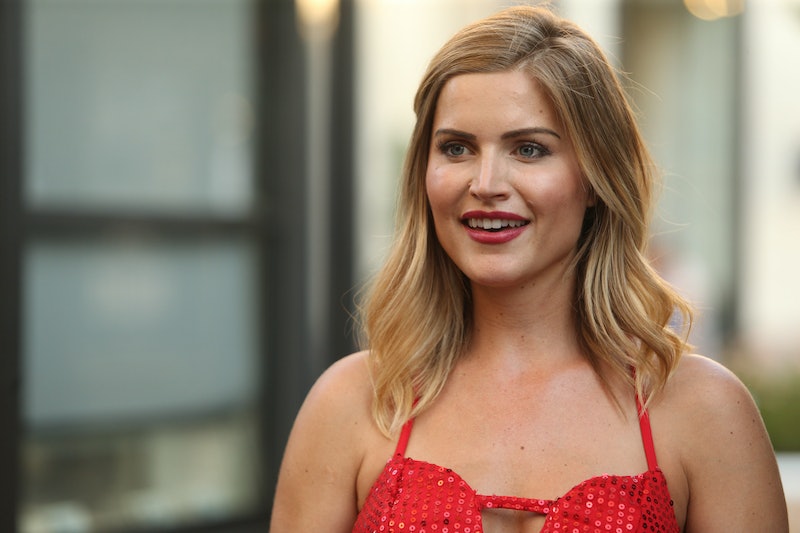 Chelsea has left a mark on Arie's season of The Bachelor (supervising producer: Deborah Read) so far, winning the coveted first impression rose and solidifying their connection through several groups dates and a nautical one-on-one. However, after The Bachelor, Chelsea seems to be getting back to her roots. She started the season as a possible candidate for the unofficial role of Bachelor villain, but Chelsea quickly proved that she is a lot more complex than the title of "villain" would imply. She worked to make sure that Arie saw her as more than "just" a mother, and, after The Bachelor, it seems that Chelsea is back to regular life raising a son.

Chelsea's Instagram feed features pretty consistent updates, except for the period of a few weeks between Sept. 9, 2017 and Nov. 24, 2017. It's likely that she was shooting The Bachelor at that time — meaning that she was away from her son for about a month and a half, and made it pretty far on the show. And, while there's absolutely more to Chelsea than her just being a mother, she's also very proud of her life with her son. Since getting back from The Bachelor, she's been sharing pictures showing her getting back to her life sand spending time with Sammy.

She's Been Walking In A Winter Wonderland

While some towns in America may not be having a snow-filled winter, Chelsea's town of South Portland, Maine seems to have no shortage of snow. This Instagram post shows her walking with her son, Sammy, on a wintery forest path.

She's Also Been Enjoying A Night Out

After having to compete with 28 other women for one man's heart while under surveillance by a camera crew, Chelsea absolutely deserves some time off. According to her Instagram post, Chelsea's preference seems to be an evening out with a nice glass of red wine.

She's Posting (And Joking) About The Show

Chelsea may be back with Sammy, but she's not forgotten her time on The Bachelor. Here she is gently ribbing the series in a snap with Bekah. "When you think you can finally take off your bra and makeup but producers say it’s time for interviews," she joked in the caption.

Chelsea has been sharing a few pictures of her and her son, Sammy. She probably missed him a ton while filming the show.

While The Bachelor took contestants everywhere from sunny beaches to bowling alleys, Chelsea appears to be most at-home in the snowy mountains of Maine. She's preparing her son, Sammy, to be a fan of winter as well through teaching the three-year-old how to ski. Chelsea may be teaching him to shred the slopes, but will possible step-dad Arie be teaching Sammy how to drive in 13 years? (Hopefully not as fast.)

While Chelsea is clearly a fan of the winter, she partakes in activities from each of the four seasons. This includes sailing on a skateboard alongside her bike-riding son, willing to embrace the cold even though they "would like summer to start now."

Chelsea's post–Bachelor Instagram feed shows that she's being active, taking plenty of time for herself, and putting a lot of focus on being a mother to Sammy. Chelsea has had plenty to do since her time on The Bachelor, but fans won't know if that time has been spent with Arie until her time on the show comes to an end, either as a winner or as someone who ends up one rose short of a garden. Whatever Chelsea is up to, however, chances are she'll be doing so with the same enthusiasm and passion she showed on The Bachelor.