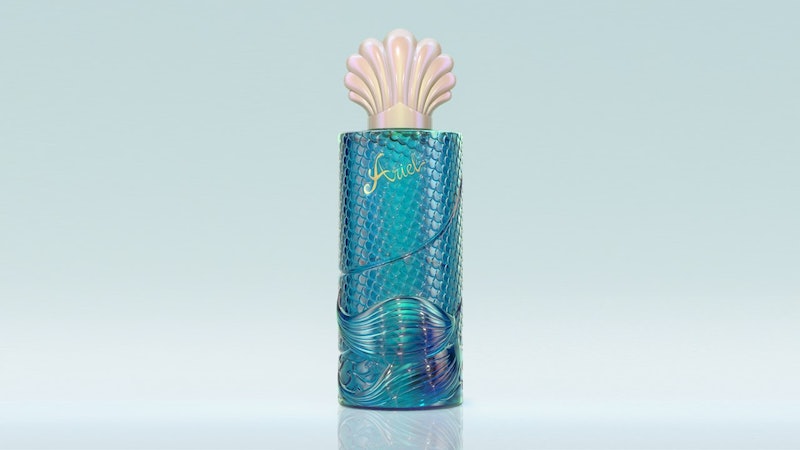 No matter how old (or young) you are, there's probably a special place in your heart for Disney. Whether it's Mickey Mouse and his iconic ears or your favorite princess, there's a bit of nostalgia that just tugs at your heart strings. Now, DefineMe's The Little Mermaid perfume is going to summon up those sentimental feels via smell.

First of all, no, this mermaid perfume does not smell like ocean water or a fish's tail. Don't be rude. According to the brand, the The Little Mermaid inspired perfume is much more about Ariel's adventurous and curious personality than the fact that she's, you know, a mermaid. That doesn't mean that the scent doesn't have a beach-like feel to it, though. The brand explains in a press release that the fragrance has notes of citrus and neroli as well as tonka bean, coconut, and driftwood that all work together for a bright and beachy scent.

While the fragrance is obviously the most important part of this Disney Princess-themed perfume, you've also got to see the bottle. The product's packaging takes inspiration from Ariel's famous tail and shows the fins wrapped around the packaging. As for the top, what else could it be but a sea shell like Ariel's own? Basically, it's too cute for words. When can you get your hands on it?

Currently, the fragrance doesn't have an official launch date, but the brand does explain that the scent will be launching in fall of this year. Considering that it's now August, fans of Ariel likely don't have much longer to wait to get their hands on the perfume.

As for the price, the DefineMe "The Little Mermaid" fragrance will come in two sizes. The first is a standard 75ml bottle (the mermaid tail one) that'll retail for $88. The second option is a travel sized 28ml spray for $28.

DefineMe's The Little Mermaid perfume won't be alone, though. According to the brand, there will be an entire series of Disney princess fragrances on their way. Ariel is simply the first princess to come along. Honestly, though, the timing couldn't be better.

If you've been paying attention to entertainment news lately, you'll know that there's a ton of fanfare surrounding The Little Mermaid. Disney has recently been in the business of remaking its classic animated films. Aladdin, The Lion King, and The Jungle Book have all been updated, and the next on the list is The Little Mermaid. Just a few weeks ago, the role of Ariel went to actor and singer Halle Bailey of the television show Grownish and group Chloe x Halle where she performs with her twin sister.

That's not the only The Little Mermaid news, though. ABC will be airing a live production of the musical, and news was just released that Auli’i Cravalho will play Ariel. Yes, that Auli’i Cravalho of Moana fame. Apparently, she's such a good Disney princess, they had to cast her twice!

While DefineMe's The Little Mermaid perfume may have nothing to do with the upcoming productions of the classic Disney film, it's certainly looking like the next year will the year of mermaid. If you want to snag the perfect fragrance for your future viewing parties, keep your eyes peel this fall to the DefineMe website to snag your very own Ariel-themed fragrance.

More like this
Jillian Mercado On Representation In The Metaverse
By Erin Stovall
M.A.C. Cosmetics’ Newest Collection Celebrates Whitney Houston's Legacy
By Audrey Noble
This Week’s New Makeup Releases & More Beauty Headlines
By Audrey Noble
Pat McGrath On Her New Star Wars Collection & “Alien-gelic” Skin
By Erin Stovall
Get Even More From Bustle — Sign Up For The Newsletter