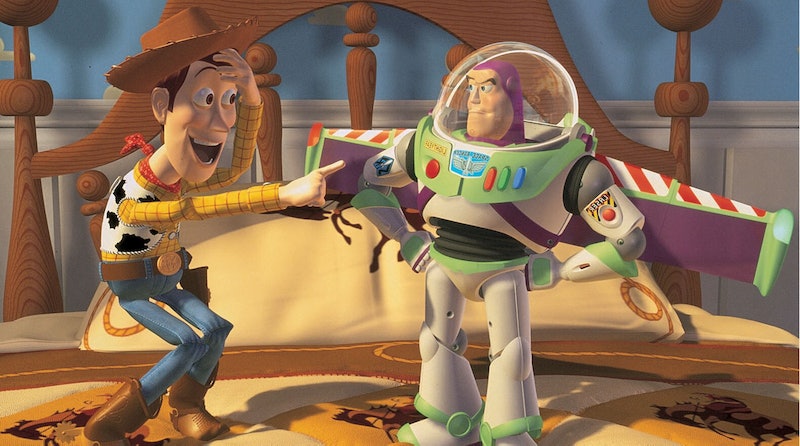 Toy Story 4 hits theaters on June 21, and with it comes the likely end to Pixar's longest-running franchise. But before watching the newest — and maybe final — adventure of Woody and Buzz, it's a good idea to find out where to stream Toy Story 1-3. The first Toy Story kicked things off way back in 1995, and was followed by sequels in 1999 and 2010, respectively. Those are some pretty lengthy gaps between movies, making it hard for casual fans to remember what's happened in the story so far. That's where streaming services could come in extra handy.

Unfortunately, none of the big three streaming services (i.e. Netflix, Hulu, and Amazon Prime Video) have any Toy Story films in their respective libraries at this time. In fact, of the three movies, the only one that is currently available to stream via any subscription-based service is Toy Story 3, which can be viewed on Starz. Starz is available as a standalone streaming app with a regular price of $8.99 per month. It can also be added to Hulu or Amazon for the same price, though you can sometimes find a deal where it's available at a discounted rate of $5 a month for a period of several months (as of this writing, this deal is currently in effect). You can also get your first week free if you've never signed up for Starz before. But when it comes to streaming the other two Toy Story films, you're going to have to open your wallet.

In order to stream Toy Story 1 & 2, you'll need to rent them from your preferred online outlet. It matters little which one you choose — YouTube, Amazon, Apple, Google Play, Vudu — you can expect to pay $2.99 to rent each movie on all of them. So basically, the cheapest way to stream all three films is to rent each of the first two Toy Story movies for $2.99 each and then sign up for a Starz trial to watch the third for free. This will set you back around six bucks total for three Toy Story movies, which isn't that bad considering the level of entertainment they provide.

But let's say you're not a fan of renting and would prefer to just own all three films outright. Well, you can do that, too, but it's obviously going to be more expensive. Prices vary, but the cheapest you'll be able to find any of the films in the digital format is $12.99. That's in standard definition. For HD, expect to pay anywhere from $15 to $20 each. You can save a bit of money if you opt for hard copies instead of digital, however, as Amazon currently has a box set of all three movies on Blu-ray for around $23.

The first three Toy Story movies aren't all that easy to stream at the moment, but that's not exactly unexpected with Toy Story 4 arriving in theaters so soon. In order to reacquaint yourself with the franchise, you're going to have to shell out some dough. But let's be honest, there are definitely worse things you could be spending your money on.