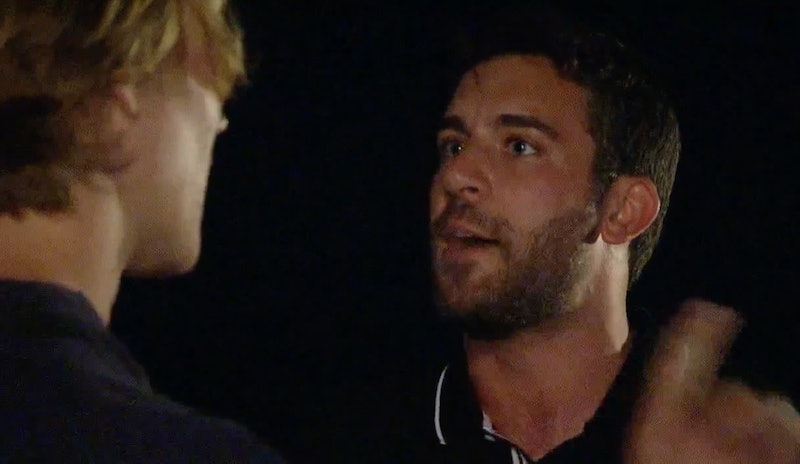 Chris Harrison has called it the most dramatic season to date, and while that may be true, Bachelor in Paradise Season 6 also seems to be the season of unconventional and unexpected departures. From being removed to voluntarily leaving, contestants are dropping like flies. And according to the teaser for the Sept. 2 episode, the person who leaves during Week 5 is going to be the most surprising yet.

First, both Christian and Jordan were kicked off the beach after breaking out into a violent physical fight over Nicole. Then, out of respect for her friends who were looking for love, Onyeka chose to leave when she didn't see a match for herself. Most recently, Dean pulled Caelynn aside after celebrating her birthday and told her he was going home. Although he liked her, he said their lifestyles just wouldn't align outside of the show, and he wasn't looking for a serious relationship.

According to the same Week 5 trailer, Dean must've changed his mind, because he returns to assumedly woo Caelynn back. It's unclear who makes the shocking exit Paradise is teasing, but based on recent events, it's most likely Clay or Derek.

Clay made the difficult — and in his words, "selfish" — decision to fly to Paradise just a few weeks after splitting up with his ex-girlfriend Angela, who he spoke with for the first time post-breakup at Chris and Krystal's wedding. The conversation impacted Clay emotionally — possibly more than he anticipated — and it looks like it sends him into a downward spiral, especially now that Angela herself has joined the show as a contestant. In the teaser, he walks the beach alone and says, "I might leave Paradise." Instead of choosing between Nicole and Angela, he might decide to leave them both and go home to figure out what he wants.

Of course, Paradise has also been an emotional rollercoaster for Derek. He was initially falling for Demi, but after he girlfriend from home arrived, she broke things off. Derek tried to remain optimistic and move on, but after he started exploring things with Tayshia, John Paul Jones angrily confronted him.

JPJ accused Derek of using his social media influence to hook up with women and also claimed he went to Paradise just to promote his podcast. Derek denied all of those claims and tried to calmly defend himself, but JPJ wasn't having it. In the Week 5 teaser, Derek finally engages in the argument, and it may not end well.

According to Derek's Instagram, both returning to and rewatching Paradise has been difficult and emotional. The last time he was there, he got engaged, and it didn't work out. He took a risk going back in. "Deciding to return to BIP was not easy," he wrote on Instagram. "When I was first asked, I didn't think I was ready to face my many anxieties, especially pain from memories of a relationship I thought was going to last forever."

He talked about the feelings he's experiencing watching the show with the rest of Bachelor Nation, too. "It's very emotional to relive my ups and downs from Paradise right now so here's a distraction to mask it all," he wrote under a picture of him with two friends, Sharleen Joynt and Michael Garofola.

Perhaps he's sharing these feelings in anticipation of his dramatic departure. It all may have become too much for him to handle. But if you were to ask JPJ, he'd say Derek left the beach to record a very important episode of his podcast.