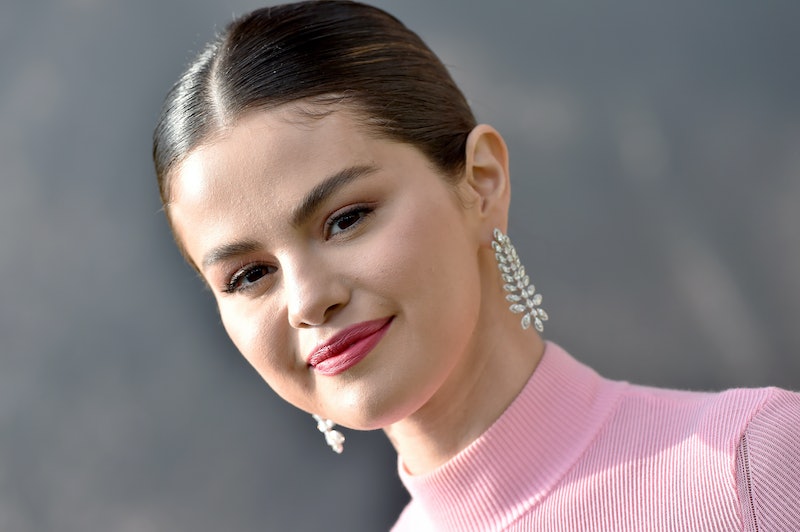 Selena Gomez is back with new music, releasing three bonus singles from Rare on her new deluxe album on April 9. And one of those songs has fans buzzing about a mystery man. After reading the lyrics, it's hard not to wonder who Gomez's "Souvenir" is about. The pop anthem focuses on one summer night the singer seemingly spent in New York with... someone. Denizens of the internet are trying to unravel the mystery, but the 27-year-old isn't making it easy. The only clue she offered is that person in question (possibly) has "Egyptian blue" eyes.

The lyrics paint a vivid picture of Gomez and someone having a steamy date in New York City possibly in August (she references the month, but not the year). "Sunset tower lobby, waiting there for me/In the elevator, fumble for your key/Kissed in every corner, Presidential Suite/Opened that Bordeaux from 1993," she croons.

In addition to "Souvenir," Gomez also released "She" and "Boyfriend," both great songs that didn't quite make the original cut on Rare. However, of the three, "Souvenir" is the one that has left listeners begging for the backstory. It's no secret that Gomez's relationship with Justin Bieber inspired some of the best songs from her latest album, including "Lose You To Love Me," but "Souvenir" doesn't appear to be about the pop star's most famous ex. Instead, it seems to recall a happier, albeit short-lived romance.

During an October 2019 interview on The Zach Sang Show, Gomez said, "I've been super, super single for two years and I want to know what love will look like next for me." She also added that being single "sucked for the first year," but "now it feels awesome." Knowing that she's been single for a while makes solving the mystery of who "Souvenir" is about tricky, but not impossible. Below, check out the three most likely candidates.

Gomez and Niall Horan were first linked in 2015 at Jenna Dewan's birthday party, per E!, but nothing seemed to come of the rumors. Then the pair were spotted together again in October 2019 when they were photographed with their group of friends. Shortly afterwards, the former One Direction member was asked about a potential romance during a SiriusXM interview, but he insisted that he and Gomez are just friends. "We're friends," Horan said. "We hang out all the time. The one photo that was ever taken got posted. We are good friends."

Still, Horan's blue eyes and 1993 birth date make him a strong contender to be the subject of "Souvenir."

New York fashion executive Samuel Krost and Gomez reportedly dated way back in 2015. They seemingly split in 2016, but the fashion exec indicated they parted on good terms. In August of 2016, he posted a since deleted Instagram that read, "Although we have ventured on separate paths, at least I know that love exists. I love you, Sel."

Krost and Gomez were spotted together again in October 2019, when the Daily Mail shared photos of them dining together at La Esquina. The singer quickly clarified on Instagram that she was still single. Still, it's interesting that "Souvenir" is about an August day in New York spent with a blue-eyed person (remember, Krost posted about Gomez showing him that love exists in August 2016, and he's a New Yorker with blue eyes who was born in 1993.)

Most of the lyrics from "Souvenir" don't fit Gomez's ex The Weeknd, but that hasn't stopped fans from suggesting he's the subject of the song. The pair dated for 10 months in 2017 before she reunited with Bieber for the last time. Per E!, Gomez and The Weeknd were spotted dining together at Manhattan's Zuma restaurant in Manhattan, which matches the opening lyrics: "New York back in August/ 10th floor balcony. Smoke is floating over/Jane and Greenwich street."

The pair were also spotted leaving Los Angeles' Sunset Tower Hotel together in July 2017, as reported by E!. This lines up with: ""Sunset Tower lobby/ Waiting there for me/ In the elevator/ Fumble for your key."

But the most significant hint could be a call back to one of The Weeknd's songs. In his "Call Out My Name," he sings about a romance that's coming to an end, but he wishes that his lover would just call out for him. In "Souvenir," Gomez sings, "Calling your name, the only language I can speak/Taking my breath, a souvenir that you can keep."

Coincidence? Maybe, or maybe Gomez's nostalgic look back on happier times could be a response to The Weeknd, letting him know that she was calling his name, even if he didn't know it.

Whoever the song is about, it's clear the memory that inspired it is a special one for Gomez. And fans are loving every second.