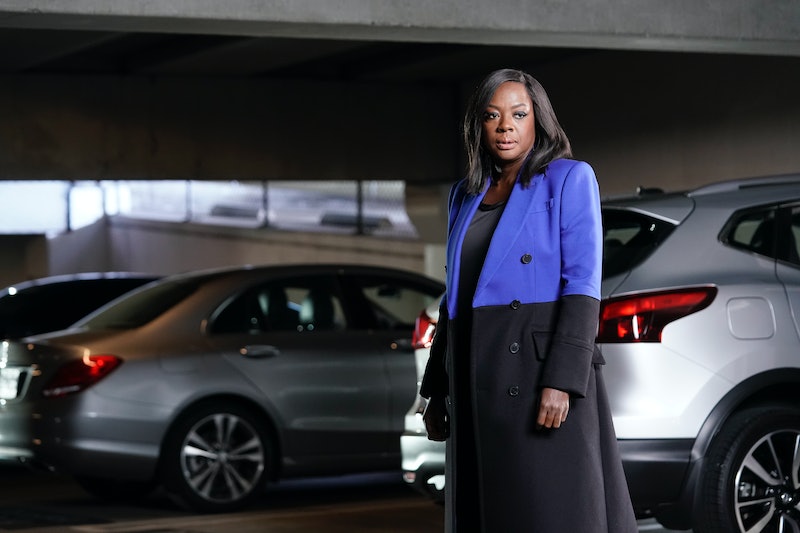 One key to survival on How to Get Away with Murder: trust no one. So when "Sara Gordon" aka the woman who mistook Annalise's apartment for her Airbnb on HTGAWM's Thursday, Nov. 7 episode "I'm the Murderer," came knocking, any true Keating Four follower would've rightfully been suspicious. However, for all her killer instincts Annalise dismissed the conveniently confused traveler as "just some idiot." By the episode's end, viewers learned Annalise's new "neighbor" is somehow connected to — who else — the Castillos.

Perhaps Annalise's guard was lowered because she was talking to potential love interest Robert when the disturbance occurred. At the same time, her quickness to grab her gun from the safe also could have indicated otherwise. Either way, Annalise probably shouldn't have been so quick to dismiss the woman, given that the Castillos are surely gunning for her more than ever, given her recent restraining order filing against Laurel's criminal family. Plus, there's always the FBI and the governor, too.

So how does this Castillo associate fit into the big picture? "Sara Gordon" (played by actor Deborah Levin) is largely a mystery character for now, especially given that, in all likelihood, that's not even her real name. What fans do know, however, is that she is part of Governor Birkhead and the Castillos' joint effort to bring down Annalise and co. After the governor learned that "Keating's right hand" Bonnie is representing Nate in a wrongful death suit against her in connection with Nate Sr.'s death, she instructed Xavier to get "everything we have on her." Adding another layer to Birkhead's delegation, Xavier, then, called none other than — you guessed it — "Sara Gordon."

After confirming that the mystery woman is "still in Philly," Laurel's brother (at the governor's behest) asked the so-called Airbnb guest to send him a copy of the "Winterbottom file." At this point, it's pretty clear that not only was this woman's presence in Annalise's apartment building very much not coincidental, but she's also quite obviously not in town to be an ally to the Keating Four et al. either.

Whatever harm this could bring Bonnie moving forward, suffice it to say Frank and Annalise would be indirectly responsible. Bonnie volunteered to act as Nate's lawyer only after Annalise instructed "bad Frank" to scare Tegan into dropping out of the case. Her reasoning, of course, is that she's protecting Bonnie and Nate from the truth of Miller's innocence. Some threatening photos Frank took of Tegan's ex, Cora, were enough to frighten her from provoking the governor by filing the suit.

Unbeknownst to Annalise and Frank, the case went forward anyway, with the target simply shifting from Tegan's back to Bonnie's. Truth be told, though, is there anyone on HTGAWM without a target on their back, really? It's also not as though anything has been smooth sailing for the K4 following Sam's death. If the flashes forward are to be taken at face value, Annalise is dead, and Michaela and Connor are the two suspects, so it also remains to be seen if that changes at any point either.

As the episode's title "I'm the Murderer" hints, now Oliver has also appeared in the future timeline to hysterically confess to whatever murder Connor is apparently being accused of. Whether this is another signal that Keating's house of cards has finally crashed down, or, rather, that it's all part of an elaborate plot to finally get the HTGAWM crew off the hook once and for all, there are only eight more episodes to left in the series to find out.

More like this
Ashton Kutcher Wants Danny Masterson “To Be Found Innocent” In Rape Retrial
By Jake Viswanath
'The Queen’s Gambit' Season 2 Tweet Wasn’t From Anya Taylor-Joy
By Mary Kate McGrath, Jack Irvin and Grace Wehniainen
Linda Ronstadt’s “Long Long Time” Plays A Pivotal Role In The Last Of Us
By Brad Witter
Taylor Swift Visited The 'Glee' Set For This Bizarre Season 5 Episode
By Grace Wehniainen
Get Even More From Bustle — Sign Up For The Newsletter
From hair trends to relationship advice, our daily newsletter has everything you need to sound like a person who’s on TikTok, even if you aren’t.