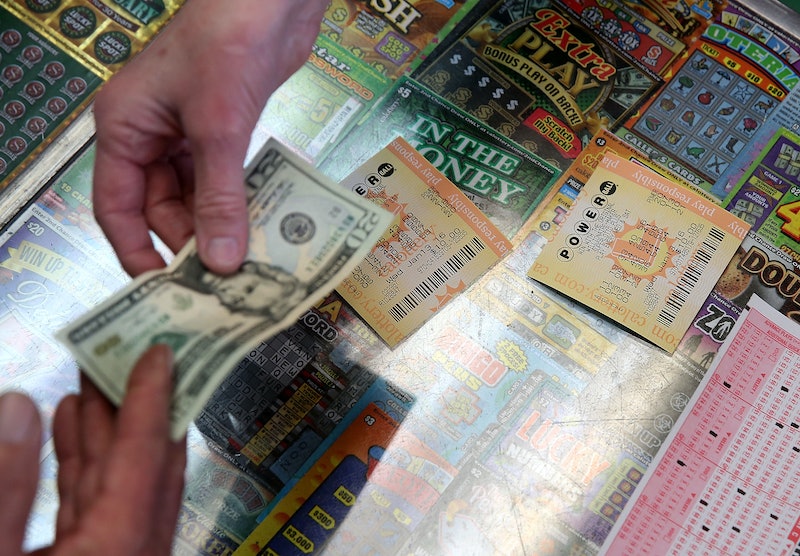 Late Wednesday night, someone got lucky in Massachusetts. If you've been wondering who won the Powerball, you'll have an answer soon.

Update: CBS Boston reported that a middle-aged woman bought the winning ticket at 2:30 p.m. on Wednesday, according to the founder of the Pride Station and Store chain, Bob Bolduc. Her name is Mavis Wanczyk.

Earlier: "There was one Powerball jackpot winner Wednesday and 9,397,723 additional players won prizes totaling more than $135 million," according to the Powerball website. "The estimated jackpot will be reset to $40 million." The Massachusetts State Lottery has announced that Pride Station and Store in Chicopee sold the winning ticket, which was worth $758.7 million. When they first made an announcement about the big win, they said that the ticket was sold at Handy Variety in Watertown, MA, but they have since corrected the error.

The winning Powerball numbers were 6, 7, 16, 23, 26, and Powerball 4, and the person who won the jackpot had to have each number matching exactly. This is why it's fairly rare that someone actually wins the Powerball; the last big Powerball win was in January 2016, when three people split the $1.6 billion prize. This winning ticket was sold to a single person, so it's likely that the winnings won't get split up — although, of course, many people who win the lottery start things off by spoiling their friends and family members.

It's not only the person who purchased the ticket who comes out on top in the Powerball game. The store that sold the winning ticket also gets a $50,000 prize, and this time that will go to Pride Station and Store in Chicopee, despite the earlier, erroneous announcement about the other store in Watertown. Three people have won the Powerball in Massachusetts, so the state is no stranger to witnessing this particular celebration.

The Powerball winner now has a decision to make about how he or she will decide to collect the money. They can accept a yearly payment over the next 30 years, which is called annuity. The payment is taxed every year, but it increases five percent each year to account for inflation. They can also take it all at once as a lump sum, but in that case, they don't get the full value of the jackpot. In this case, where the jackpot was almost $759 million, they would collect about $443 million all at once if they decided to go with the lump sum.

Either way, it's a hefty chunk of change, and Wednesday's Powerball winner can now rest easily in terms of their finances — assuming they start communicating with a good financial advisor. There's always been talk of a lottery curse, though, and there are indeed horror stories from people who won the lottery. If they don't want to draw attention to themselves — a common problem amongst the people who had problems after they won the lottery — the Powerball winner just might choose to remain anonymous.

More like this
Howard Stern's Net Worth: Is He The Richest Man In Radio?
By Hugh McIntyre
Which RHODubai Housewife Has The Biggest Net Worth?
By Hugh McIntyre
Twitter Is Totally Divided Over Dami & Luca’s Behaviour
By Sophie McEvoy
Twitter Is Reeling Over Jack Keating’s *Rollercoaster* First Day On 'Love Island'
By Frances Stewart
Get Even More From Bustle — Sign Up For The Newsletter