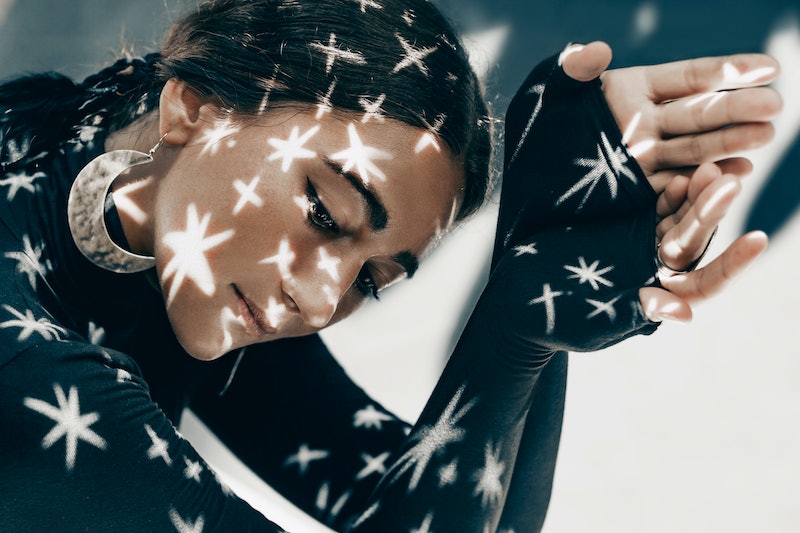 July 2019 was rough. We had that really intense series of eclipses, a rocky Mercury retrograde period, and a whole bunch of other planets retrograding as well. Thankfully, in the name of balance, the astrology of August 2019 is actually really positive — and on Aug. 8, aka 8/8, we're due for very special and spiritually significant day known as the "lion's gate portal" that can help us clear out any energy blockages and allow us to start manifesting abundance. But what is the lion's gate portal, according to astrology and numerology? Some people believe Aug. 8, 2019 will be the luckiest day of the year so far.

The lion's gate portal has its roots in astrology, and is apparently named for the fact that it takes place right smack in the middle of Leo season. It is said that this energy portal opens on Jul. 26 and remains so through Aug. 12 — but that its energy is most potent and focused on Aug. 8. Apparently, this date has been celebrated as a special time with ceremonies and rituals for thousands of years, dating back to the calendars of the Mayans as well as the ancient Egyptians — which makes it a really great day to set intentions for your future, plan a ritual, or do a meditation.

But before we dive into the astrology behind the lion's gate portal, let's chat about the numerological significance of 8/8 as a number. "In numerology, the eighth day of the eighth month is a highly spiritual and charged time," explained Forever Conscious on its site. "The number eight represents infinity: the infinite soul that we are and the infinite journey that we take." This is a really interesting take, considering the symbol representing infinity is really just a number eight turned sideways. "Eight is also the number associated with abundance, power, and higher realms of consciousness," continued Forever Conscious, "making 8/8 a super potent time to charge and clear our energy for receiving."

Bustle spoke with astrologer and Tarot reader Caitlin McGarry about the numerology behind this date as well. "In numerology, the number eight vibrates at the frequency of personal power, success, and abundance," she explains. "It also represents the lemniscate or infinity symbol, which embodies the infinite energy of cosmic consciousness, perpetual motion in the universe, and the connection to the power of the divine."

As mentioned, though, the significance of 8/8 also weaves its powerful numerology with astrology in a synergistic and fascinating way. Obviously, the lion's gate portal always takes place during Leo season — which is significant given that the sun is Leo's ruling planet, and is therefore very powerful as it travels through the lion's territory. Perhaps more importantly, though, is the placement and activity of a star known as Sirius, which is the second brightest star in the sky (second only to the sun, of course!). Because of this, Sirius is known as the "spiritual sun." "While our Sun is responsible for beaming down life for our physical bodies, especially when it's in its ruling sign of Leo, Sirius is responsible for beaming down life for our spiritual bodies," explained Forever Conscious of this dichotomy.

McGarry also expands on this in her conversation with Bustle. "Since ancient times, the second brightest Star in the sky, Sirius, has been known as the 'Spiritual Sun.'" she explains. "It emits an energy that is hugely activating for us and 8/8 is the day when the energies are at their highest and most potent, named as the Lions Gate Portal." It's a very powerful day for us spiritually and has the potential to open new doors to opportunities and awaken new parts of ourselves that will help us on our spiritual journeys.

So just as the sun necessitates life on our planet and is most vital during its summertime peak in Leo, Sirius necessitates our spiritual lives and reaches its zenith on Aug. 8. "As Sirius rises in the sky, it perfectly aligns with Orion’s Belt and the three stars of Orion’s belt line up perfectly with the Pyramid of Giza," explains McGarry to Bustle. "So on 8/8 Sirius will align with the Great Pyramid, making synchronicity at its finest!"

With the seemingly-mystical alignment of Sirius with other significant points in the sky also comes a more potent dose of its spiritual power, as on Aug. 8, it'll appear to be closest to the Earth. "In truth, Sirius is working away on us all the time, but each year during the peak of Summer ... Sirius moves closer to Earth," explained author Katherine Anne Lee on Numerologist.com. "From the end of July, the Spiritual Sun slowly comes into alignment with our Sun, Earth, and Orions Belt. And on August 8th, its energetic effect on us peaks."

The lion's gate portal is always a powerful time of year given the aspects of the sun and the "spiritual sun," Sirius, as well as the highly-charged numerology. But this year, there's also a particularly powerful and positive trine aspect taking place between the two benefic planets — lucky Jupiter, bringer of blessings and abundance, and lovely Venus, ruler of love and luxury. This trine (which is an inarguably sweet, lucky, and positive aspect between planets in astrology) is raining down tons of blessings in the areas of money, love, and personal growth — all themes which serendipitously align perfectly with the energy of the lion's gate portal.

"The 8th is a very energetically potent day around manifesting money and love," explains astrologer Lisa Stardust, who spoke with Bustle about the astrology of this year's lion's gate portal. "Venus and Jupiter (who's currently retrograde in Sagittarius) will bring us all luck and prosperity, promising good vibes for all." And on Aug. 7, good-luck planet Jupiter also forms a trine with the all-powerful Leo sun — the positive effects of which will still be felt come Aug. 8.

So, how can you make the most of the lion's gate portal energy of 8/8? It's a beautiful day to plan a potent ritual related to abundance. If you want to get a little witchy and spiritual, Forever Conscious provides a beautiful lion's gate portal ritual on its website, which is designed to help you work with your heart and third eye chakras to practice forgiveness, path-clearing, and spiritual awareness. If you're not so into a full-blown ritual, it's also a great day to sink into a deep meditation, and there are plenty of lion's gate portal guided meditations you can work with if you need inspiration. Lastly, given the glittering energy of this lovely Jupiter/Venus trine, today is a fabulous day for working with intentions and manifesting your dreams. Both the lion's gate portal and Jupiter's energy is about abundance and infinite possibility, so take advantage of these synergistic forces and create your own intention-setting ritual, create a vision board, or simply make a list of your intentions and steps you can take to make them reality.