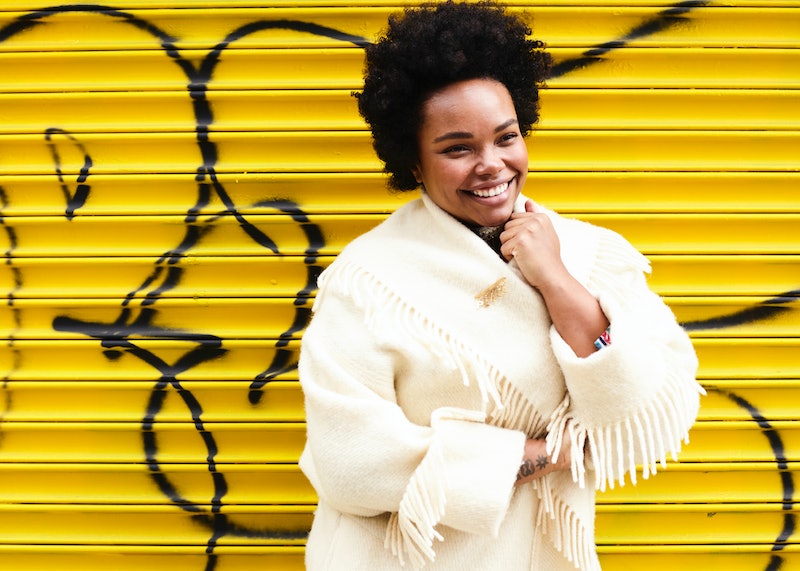 As the days start getting shorter and the nights start getting colder, that can only mean one thing: the beginning of cuffing season is upon us at last. Cuffing season is that time of year when singles start desperately searching for a partner to keep them company during the cold winter months — because after all, it's only natural to crave companionship when you know you're about to be stuck indoors for weeks on end.

In case you've never heard of cuffing season and need proof that this phenomenon is a totally real thing, a 2017 study of 1,500 people by Elite Singles found that 70 percent of singles said they're most inclined to look for a serious relationship during the colder months. So what is it about the winter months that makes us want to find someone to ~hibernate~ with so badly? A big part of the pressure of cuffing season comes from the desire not to be single during the holidays — because holiday parties are a breeding ground for that oh-so-irritating question: 'But why are you still single?!'

"Cuffing season is, in part, a result of societal pressure," Heather Ebert, dating and relationship expert at WhatsYourPrice.com, tells Bustle. "A lot of it has to do with singles not wanting to show up alone when they go home for the holidays. Some people want to be showered with gifts ... others just want to cuddle up next to someone to stay warm."

But just because it might feel like there's tons of pressure to be coupled up this time of year doesn't necessarily mean you have to focus on finding a partner. If you're unclear on what you want for your relationship status in the coming months, here's a breakdown of the pros and cons of staying single (or not) during cuffing season.

The Benefits Of Being Totally Single During Cuffing Season

When you're single and not looking to mingle, cuffing season can feel like the worst time of year. Even if you're normally content with your single status, seeing all your friends start to couple up — in addition to seeing everyone around you be extra romantic around the holidays — can add a lot of pressure, and make you question your decision to stay single. But the truth about many partnerships formed for the sake of convenience during cuffing season is that they aren't all built to last.

"It’s easy to get caught up in the hype of cuffing season and rush to settle down for the winter," Ebert says. "But those romances are unlikely to outlast the cold because they’re rushed and usually not met with intentions of lasting any longer. Instead of focusing on settling down for the last part of the year, spend some time on yourself and with your family."

If you know you're not really interested in finding a partner for whatever reason — maybe you're focused on your career at the moment, maybe you want to invest more time into your hobbies, or maybe you know you're simply not in the right place for a relationship — that doesn't just magically change because the weather's changing.

"It can be detrimental to look for a partner just for the winter if you feel like you 'have to' or to avoid some kind of negative emotion," Rachel Perlstein, LCSW, co-founder of dating and relationship coaching business a good first date, tells Bustle. "Try to identify and address the underlying thought and feeling, and tend to it."

If you sense that you're starting to cave to the pressure of dating during cuffing season, check in with yourself first. Are you feeling lonely? Try spending more time with your friends or family. Bored and looking for a way to pass the time? Check out a new club or group, or take up a solo hobby that you've always wanted to try. The point is that you shouldn't feel like finding a partner is the only way to spend the winter months.

"Give yourself some down time to create a list of reasons that you love being single," Perlstein says. "Keep it handy and take it out when you need a reminder! Create a supportive community and if it's hard to think of reasons it's great to be single, try some new activities, have a new adventure, do some things to ensure your list grows. Choosing to be single is an amazing gift to give yourself!"

How To Navigate Casual Dating During Cuffing Season

Of course, staying totally solo and not dating at all during cuffing season is far from the only option for singles — but for anyone who's just looking to date casually or hook up during cuffing season, that can feel like a challenge in a totally different way. When it seems like everyone you meet is looking for a relationship, it can be tricky to navigate the dating scene. However, just because casual dating might not be the "norm" this time of year — compared to the carefree, hookup-filled summer months — doesn't mean you shouldn't feel able to continue dating in the way that you want.

As with anything related to relationships, as long as you're upfront with your intentions and communicate with your dates about what you are (and aren't) looking for, there's no reason you shouldn't be able to continue dating casually during the winter months.

It might sound counterintuitive, but the truth is that a good first date doesn't necessarily have to lead to a second date — and since dating is a skill that can be honed, it's always good to practice, even if you don't want or expect anything serious to come of it. And what better time to practice dating than during the frigid months, when there are all sorts of cute winter dates you can go on?

The Signs You're Actually Ready For A Partner This Cuffing Season

On the other hand, some singles might feel totally ready and excited to find a long-term partner this cuffing season. But how can you tell whether you're genuinely ready for a serious partner, or whether your brain is just being influenced by the sight of happy couples ice skating and sipping hot cocoa all around you?

It might be a cliche, but the only way to know is to ask — and honestly answer — yourself if you're in a good place for a relationship. Do you know what you want in a partner? Do you feel content and fulfilled on your own while single? "Consider yourself ready to settle down during cuffing season if you can look within yourself and honestly say that you’re not rushing into something or doing it to please someone else," Ebert says.

The best, long-lasting relationships are formed when both partners are truly ready to settle down: rather than looking to fill a void, both singles should be looking instead for someone to add value to their already 'complete' lives as individuals. If you just settle down with any warm body during the winter months, you might find that your feelings thaw along with the snow come springtime.

"Forcing yourself to settle down with someone just because everyone else is doing it or because you everyone is expecting you to doesn’t mean it’s what’s best for you," Ebert says. "A healthy, strong relationship takes time and it’s not going to happen overnight just because it got cold outside."

So no matter what your relationship status is this cuffing season, make sure you're being true to who you are and what you want for your dating life. Whether you want to find a partner to cuddle up with for months to come, have a sexy winter fling, or stay totally single, it doesn't matter so long as you're having fun. And if you're worried about enduring another holiday season as a single, don't fret: just be prepared to answer any inquiries about your single status with a firm and proud, "I'm single because I want to be — next question."

More like this
15 Flirty "Thinking Of You" Texts That’ll Make Your Crush’s Day
By Lexi Inks
Experts Say These 23 Things Won't Happen In A Strong Relationship
By Carolyn Steber
25 Questions To Ask Your Friends When You're Bored
By Lexi Inks
What Is "The Ick?" The TikTok Dating Term, Explained
By Courtney Young
Get Even More From Bustle — Sign Up For The Newsletter