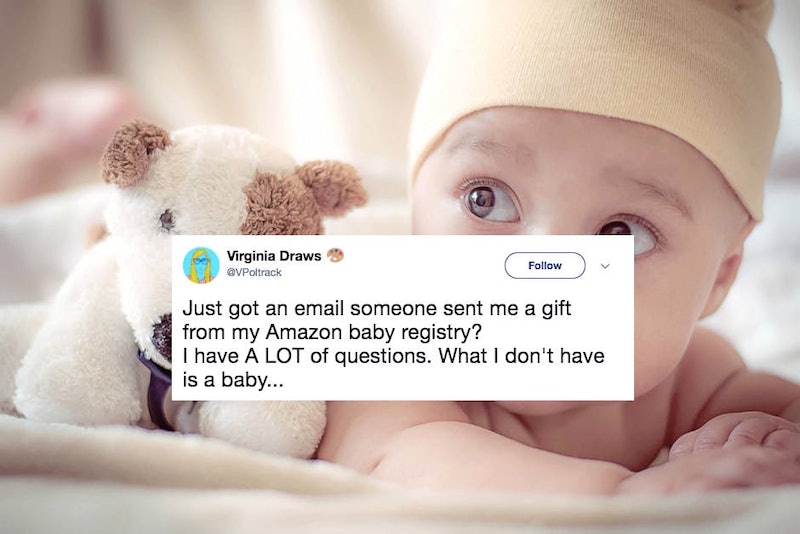 Did you open up your email last night and discover that you had an email from Amazon about your baby registry? Did you blink, confused, and think, “Wait a minute — how did someone purchase a gift for my baby off my baby registry? I have neither a baby nor a registry!” If so, you’re not alone: An as-yet-undetermined number of people all received this email, leaving an awful lot of confusion in its wake. However, according to a statement released by Amazon, it was the result of a “technical glitch,” so rest assured that the email wasn’t sent on purpose.

“Hello Amazon Customer,” the email begins — which is unusual in and of itself, as Amazon’s communiques usually address each customer by name. (You’d be amazed at the number of emails I have from Amazon sitting in my inbox that have my name right in the subject line.) It continues, “Someone great recently purchased a gift from your baby registry! You can visit your Thank You List to easily keep track of all gifts purchased. PS: Remember some Gifters like when it’s still a surprise.” Finally, it concludes, “Have a great day!” before signing itself off lovingly, “Your Amazon Baby Registry Team.”

If you, like myself, did not receive this email (and are perhaps equal parts relieved and disappointed about that fact), here’s what it looked like in all its bizarre glory:

The generic “Hello Amazon Customer” greeting and the unusual grammar led many to suspect the message wasn’t even from Amazon, but rather from a scammer posing as Amazon. According to Amazon, though, it's not a phishing email; what's more, CNN reports that none of the links in it have been found to be suspicious. Personally, though, I'd avoid clicking on any links in the email anyway, just to be on the safe side. (For the curious, CNN noted that clicking on the “See Your Thank You List” button in the email took some users to a page where they could set up anew registry, while others were delivered to a broken link.)

“We are notifying affected customers,” an Amazon spokesperson said to Fortune (and a wide variety of other news outlets). “A technical glitch caused us to inadvertently send a gift alert email earlier today. We apologize for any confusion this may have caused.”

And it did, in fact, cause a lot of confusion. Many were wondering how exactly they’d ended up with a baby registry gift on the way when they were not, in fact, in possession of the two key components required for this turn of events to make sense:

While others were curious about exactly how long the term “baby” applies to one’s offspring:

Some sent out congratulatory messages to everyone now seemingly expecting babies from Amazon:

While others felt a little left out:

For what it’s worth, the apology emails to customers from Amazon do appear to be forthcoming; WPTV news anchor Ashleigh Walters tweeted out hers after she got it this morning:

But still. The whole thing? That’s a lot of yikes.

It's even more concerning when you consider that for a lot of people, this isn’t just a funny gaffe. I realize that the initial emails weren’t sent on purpose — but as many Twitter users pointed out, receiving a message like this could be extremely painful for people who want to become parents but have struggled with infertility or had miscarriages, people who may have had to deal with losing a child, or for anyone who might be in any other difficult family- or parenting-related situation.

What’s more, as photographer Michelle Kinney noted, it’s also a weird message to have received if you’re a woman or femme who doesn’t want kids at all:

Again, I do realize that the email was unintentional. But if you’re someone who already puts up with a lot of inappropriate comments from other people about your choice not to have children — and especially if you’re a woman or femme in this situation, as we live in a culture that insists you must have children, because that is what you’re supposed to do, and oh my god, how can you not want kids, what’s wrong with you — well… let’s just say that it would be understandable if you had rather strong feelings getting something that sends that exact same message from the place you order your paper towel refills from.