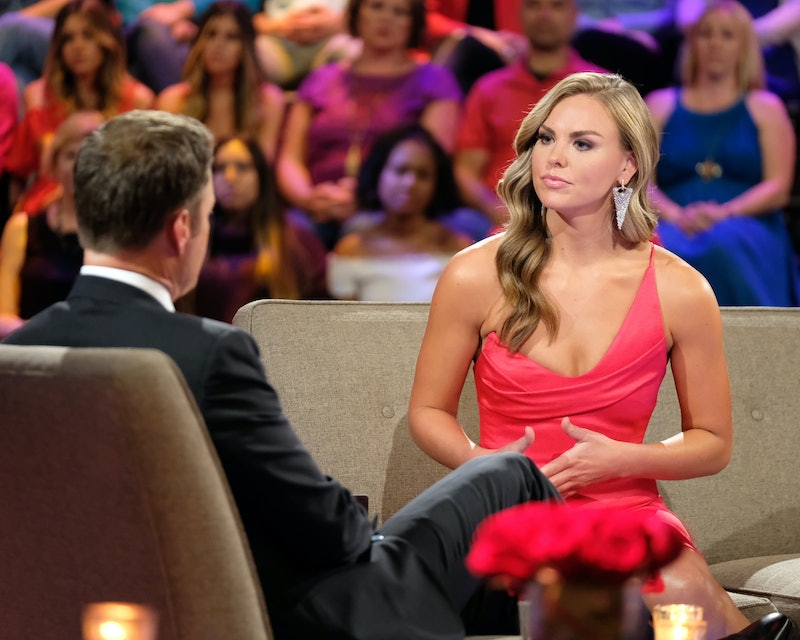 Hannah B.'s Bachelorette journey may not have gone as she expected it to, but for a woman who's bucked convention from the beginning, it was kind of the perfect ending. Yes, it was heartbreaking to see her happy engagement torn apart by Jed's dishonesty, and no, she shouldn't have had to deal with that — or any of the other men's drama this season, for that matter. But as Hannah's After The Final Rose comments showed, the experience did give her some valuable, newfound insight: she doesn't need a man to validate her worth, even if that means walking away still single from a show hinged entirely on the expectation that she'll find love by season's end.

During Hannah and Jed's breakup, it was clear she was upset that her experience had, in her words, been tainted by Jed's actions. She'd been nothing but her unabashed self all season — even when that meant making unpopular choices — but Jed hadn't been able to do the same in return. When Hannah sat down with host Chris Harrison on ATFR, she was visibly still hurting, but when he asked what she'd learned, she had this brilliant answer:

"It's been really heartbreaking, for sure. And I questioned a lot of things in my experience, but I am really proud of myself. In the past, I've been in relationships where there wasn't always trust and there wasn't always honesty, and I would stick with that. I would want — need — a man, but then I would forfeit my happiness. But I have realized that I don't need a husband. I want a husband, but I don't need one. And I'm really, really proud of the woman that I've become through all this. Because I am hella strong."

Though plenty of Bachelorette couples have broken up after the cameras stopped rolling, Hannah is the first Bachelorette since Season 3's Jen Schefft to actually end the season single. Schefft technically chose a winner, but ultimately rejected his proposal and was single during After the Final Rose. Hannah's situation, however, was vastly different: she left the show alone not because it was her choice, but because Jed lied and misled her. Ultimately, that makes it all the more impressive that she's been able to come away from the breakup with such a mature perspective.

Looking back on the season, this ending makes total sense for Hannah, as she's been breaking the Bachelorette mold since day one. Though Luke P.'s continued presence on the show was frustrating to the other men in the house, everyone watching at home, and even Hannah herself, she refused to send him home until she was good and ready. Typically, the show's "villains" don't stick around as long as he did, but she made clear she wasn't playing by anyone's rules but her own.

Hannah was also more candid about sex than perhaps any Bachelorette has been in the past. Not only did she hold her own when Luke P. shamed her for having sexual relationships with the other men (which is what finally prompted her to send him home), but she had a frank, on-camera conversation with Tyler C. about why she didn't want to have sex in the Fantasy Suite, and was proud to admit she and Peter had sex not once, not twice, but four times during their windmill date. Particularly after a season of The Bachelor that revolved around making a spectacle — and often a joke — out of Colton Underwood's virginity, Hannah's openness about sex and its importance in finding a life partner helped to soften several antiquated stereotypes inherent to the Bachelor franchise.

Though many previous Bachelorettes have been similarly strong-willed, unapologetic women, Hannah was truly a lead we've never quite seen before. She allowed herself to make mistakes and feel regret. She had to make an apology or two. And she was up front about her flaws, saying she isn't perfect and would never try to be. But Hannah did it her way, for better or for worse.

So while she may be walking away from The Bachelorette still single, hopefully she knows she's resonated with a generation of viewers who see themselves in her. She's shown them that they have the right to live life for themselves and demand the respect they deserve. She's stressed that self-worth should always come first. And she's made it clear that while it's perfectly fine to want a husband, you sure as hell do not need one.