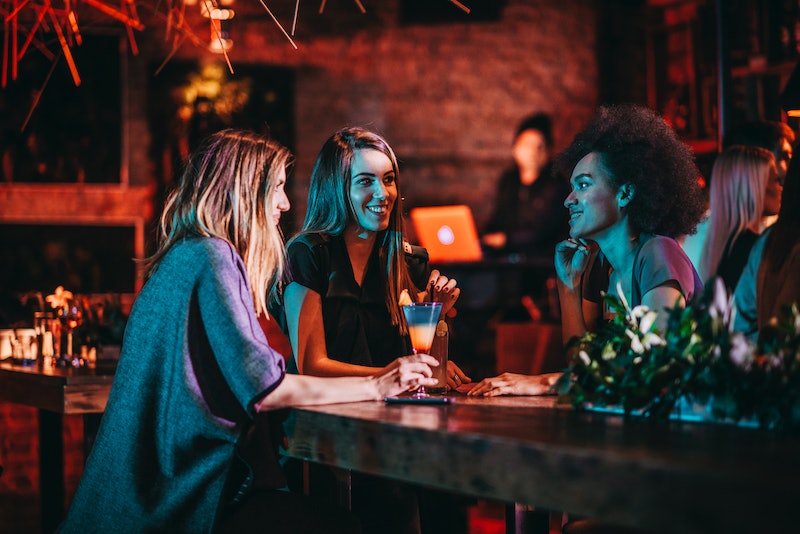 Let me set the scene. You’re at a house party and, despite not knowing many people, having an absolute hoot meeting new friends to add to the roster. Then suddenly the conversation you’re having changes tack and starts sailing straight for your private life. As an openly gay woman this is a prime situation for one of my pet peeves — women saying they how much they'd love to be in my boots. So here’s why it's not OK for straight women to say they wish they were gay.

Although I’m very aware that heterosexual relationships have just as many intricacies, ups, downs, and tricky times to navigate — straight people are in a place of privilege. It’s incredibly hurtful to be told by a straight person that they wish they could be like you. Here are just a few reasons why.

Even though it’s 2020, marriage equality exists in some countries, and homosexuality has been decriminalised in certain parts of the world (aka, according to the Human Dignity Trust, it’s still illegal in 73 countries); many members of the LGBTQ+ community continue to experience hatred and oppression in their daily lives. Meanwhile, a 2017 Stonewall study, which surveyed 5,000 members of the UK LGBT community, found that one in five LGBT people had experienced a hate crime or incident relating to their sexual orientation and/or gender identity in the year 2016-17.

Personally I've been lucky enough to have experienced relatively few homophobic incidents; nevertheless I still remain painfully aware that relentless oppression is an issue faced by many in my community. I wouldn’t wish that on anyone, so why the hell would you wish that on yourself?

Unfortunately most women are familiar with the feeling of not being safe. Maybe it’s walking home at night alone with your keys in your hands, or the frustrating anxiety of unwanted advances any time, anywhere. Even getting a taxi can feel like a vulnerable situation. So imagine what it’s like for two women on a date? Being a lesbian isn’t all pillow fights and brushing each other's hair. It’s having to look around you to check if you can hold hands. It’s knowing in certain circumstances and places you’re not safe to be out. It’s knowing you might have to keep your entire relationship secret from family members. It’s the potential of experiencing physical violence.

Last year, Melania Geymonat Ramirez and Chris (who chose to keep her surname private) were were assaulted on a London bus by a group of young men while out on a date. The young men were angry that Melania and Chris wouldn’t perform their sexuality for them. At the time, Geymonet told press including the Guardian, “We decided to tell the story because this situation needs to change, and maybe this helps a little.” Adding: “For me, it was a moral obligation. This needs to stop. This was a terrible episode, and maybe [if] we say something, we can contribute to something bigger.” Chris wrote an opinion piece for the Guardian flagging that the violence they experienced might not have attracted quite as much international coverage had the story not been about the, “victimisation of a pretty brunette and blonde.” Adding that when it comes to those who don’t fit the white, cis, patriarchal vision of queerness, the press seems to often look the other way. “The commodification and exploitation of my face came at the expense of other victims whose constant persecution apparently does not warrant similar moral outrage,” she wrote.

This is an extreme case of homophobic violence, but I assure you that whenever you’re out with a same-sex partner and not in a safe space, the risk of something like it happening is always at the back of your mind. Whether it’s when you’re kissing and someone makes a vile comment or shouts “LESBIAN!” Or when you’re chastised by a taxi driver for holding hands. Or when you’re asked lurid and invasive questions about your sex life by someone whose surname you don’t even know. Or when a straight woman tells you they wish they could be gay, discounting your whole experience and the struggles you face by just being.

Often, when a straight woman tells me they wish they were gay, the second phase of the conversation leads pretty quickly into the whole sex thing. It’s something that never ceases to amaze me, as I don’t think of a stranger’s sex life as a conversation starter. Now, if I had a pound coin for every time I heard “I could totally do like everything above the waist, but below? No way. Vaginas just freak me out,” I’d be sitting on a fortune. Well versed in this conversation as I am now, I usually respond with “that must be terrible for you. Did you know you have one?”

I understand that straight women saying they wish they were gay might be a strange sort of awkward attempt at empathy. But if someone really wants to build a connection, wouldn’t it be better if the conversation was one of allyship — a discussion about the inequalities or issues faced by all women, instead of a display of condescension, ignorance, and fetishisation of LGBTQ+ relationships? Let’s not glamourise each other’s struggles. LGBTQ+ women aren’t seen as equal to cis-het women, and that's something we seriously don't need to be reminded of.

More like this
Gen Z Are Twice As Likely To Identify As Queer, According To New Data
By Sam Ramsden
Here’s What TikTok's "Mascara” Trend Is *Really* About
By El Hunt
Forestcore Is About To Take Over Your TikTok FYP
By Sam Ramsden
Pret & Costa’s Coffee Is The Strongest On The High Street, According To Which?
By Sam Ramsden
Get The Very Best Of Bustle/UK
Sign up for Bustle UK's twice-weekly newsletter, featuring the latest must-watch TV, moving personal stories, and expert advice on the hottest viral buys.