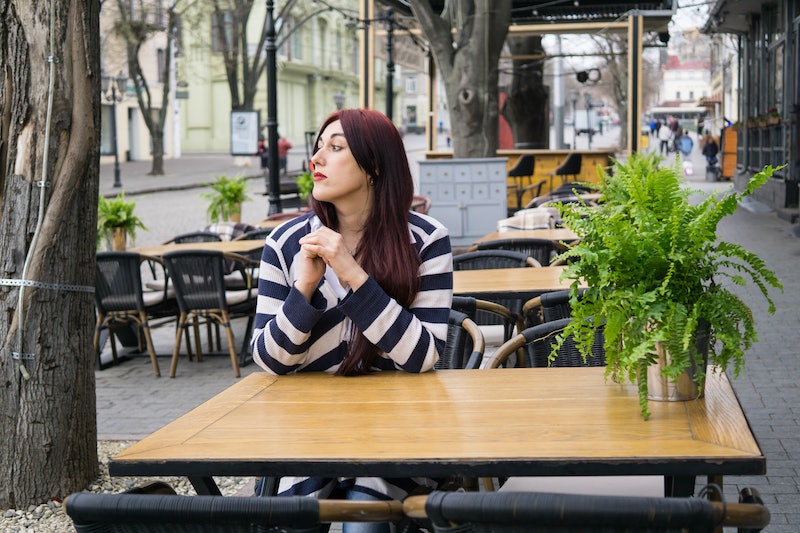 It can be tough to wrap your head around why someone would plan a date and then bail. Once you've shown interest in each other, and set up a time and location to meet, you'd think the next step would be actually, well, meeting. But even if they seemed excited to hang out, there are quite a few reasons why your date might not follow through.

This can happen under a variety of circumstances, but is something that's much more likely to happen when using dating apps. "While ghosting or canceling at the last minute happens with both face-to-face and online dating, it's more common with online dating," Dr. Catherine Jackson, a licensed psychologist and board-certified neurotherapist, tells Bustle. And it has a lot to with the anonymity of it all, and how easy it is to just disappear.

"Some people don't feel as much of a connection to people online," Jackson says, since all they have to go off of is a profile photo and a few messages. And because you haven't had a chance to add any real depth to your new relationship — like the kind you'd gain from chatting in real life — it can be difficult to feel a sense of loyalty or commitment, and even tougher to take plans seriously.

It's also not uncommon for people to just straight up forget. If they're super busy, and if you're only casually talking, the plans you made to meet up for coffee a week in the future may not stick in their mind. Add in the fact they could also be talking to more than one person, Jackson says, and fielding lots of options, and it's no wonder they can't keep their calendar organized.

Of course, some people might want to meet up, but find themselves bailing due to nerves. "[They] have keyboard courage, feeling more comfortable expressing themselves online in text than actually having to hold a face-to-face conversation," Jackson says. "So they may cancel or ghost to reduce these feelings."

Once the day of your date arrives, the mere thought of taking your conversation beyond the safety of the screen can be daunting. As they imagine sitting across from you in a bar, or strolling around a museum, the idea of staying home can come as a huge relief. And this is even more likely to happen if they built themselves up online, and are afraid of letting you down.

"Some people may cancel or ghost [because they don't feel] good enough to be with you," Jackson says. "Or that somehow, though the two of you have [made a connection online], you will discover something about them [in person] and will no longer be interested." Many people worry that they won't be found attractive, for example, or at least not as attractive as they made themselves out to be in their profile.

For others, they were never planning on creating a serious relationship, and thus weren't taking the date seriously. The truth of the matter is, many people use "dating apps as more of a novelty, or to explore or get a self-esteem boost," Emily Pfannenstiel, LPC, a licensed professional counselor who specializes in relationships, tells Bustle. "Having someone 'like' you back feels good."

While it isn't fair to you, it might help explain why they seemed so interested, only to do a 180 and flake out. It may not feel good, but it happens. And all you can really do is accept it and move on. "The best way to approach online dating is to not take anything too personally early on," Pfannenstiel says. "As you get actual face-to-face time through dates, then you can raise your expectations."

And in the meantime, you can help increase the chances of the date actually happening. To start, it's always good to build as strong of a connection as you can via your conversations, Jackson says, by taking it beyond casual chitchat. Can you talk on the phone? Or have some in-depth convos? Then go for it.

Also, don't hesitate to follow up and confirm the date, and let them know you're looking forward to it. "This will give them time to back out in advance if they want, so you aren't left sitting and waiting on someone who won't show," Jackson says. Or, it'll help seal the deal so you can have that date — and see where it goes from there.

More like this
How To Do The Intimacy-Boosting Lotus Sex Position
By Laken Howard and Lexi Inks
Is It A Rebound Relationship Or The Real Thing?
By Carolyn Steber and Lexi Inks
Are Quality Time & Physical Touch Love Languages Compatible?
By Lexi Inks
Cookie Jarring Is The Dating Term You Need To Know
By Sophie McEvoy
Get Even More From Bustle — Sign Up For The Newsletter