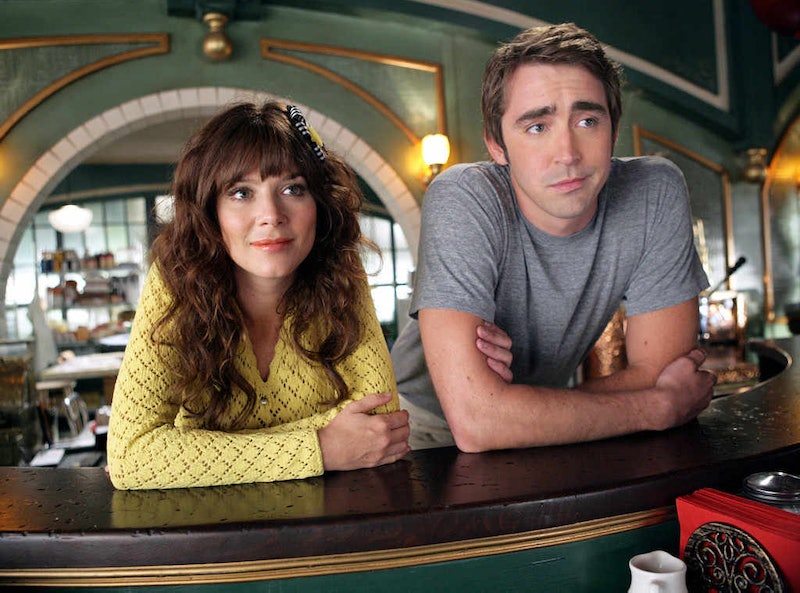 It's safe to say that 10 years after the premiere of Pushing Daisies there's still nothing like it on TV. In this golden age of television filled with anti-heroes and dark dramas, creator Bryan Fuller's candy-coated rom-com is still a quirky breath of fresh air. Even if Ned (Halt and Catch Fire's Lee Pace) had the ability to give and take yours away with just one touch. Unfortunately, Ned couldn't keep the show alive and fans only got two seasons of Pushing Daisies, but the unique way the ABC show tackled love, life, and death lives on thanks to its small, but loyal group of fans who just can't say goodbye.

Who can blame them? In the 10 years since its premiere there just hasn't been a show that could possibly fill that pie-shaped hole in all their hearts. The New York Times 2007 review of Pushing Daisies pilot explained that “television lives by analogy, but Pushing Daisies is not really like anything else at the moment.” Even now, the “if you like Pushing Daisies, you'll like this” comparison doesn’t necessarily work. Sure, Michael Schur achieves peak whimsy with Parks and Recreation's small town charms and The Good Place's deliciously punny sense of humor but neither gets at the beauty of humanity quite like Pushing Daisies. Why is Pushing Daisies still worth celebrating a decade after its debut? Because it remains absolutely one of a kind.

Back in 2007 when Pushing Daisies premiered it would have been easy to write it off as an Amelié homage. Especially since Fuller and his cinematographer Michael Weaver never denied Amelie's influence over Pushing Daisies. “We decided it should feel somewhere between Amelie and a Tim Burton film," Weaver told Variety in 2007. "Something big, bright and bigger than life.”

And that's what it was. From the color palette to the narrator to the fanciful design — Ned's pie shop The Pie Hole is literally shaped like a giant pie — it was a bigger than life version of a fairytale anchored by Ned, his recently resurrected childhood sweetheart Charlotte "Chuck" Charles (Anna Friel), and other quirky characters like Chuck's synchronized swimming aunts, the Darling Mermaid Darlings. But, to make the Amelié comparison takes away from Pushing Daisies' charming originality.

Pushing Daisies is about the undead — or as Ned prefers we call them, the "alive again" — but it’s all about the living. This was clear from the first 15 minutes of its premiere, which showed how Ned's ability to play God weighs on him. He brings his mom back from the dead only to learn the hard way that his ability to give life comes with a few caveats. Ned can only bring people back for a minute, if he touches them again they're gone forever. If he doesn't, they stick around as long as he keeps his hands off them. But someone else has to take their place. In the case of his mom, it was Chuck's dad. Ned can give life, but he can also take it away.

With every episode, you're left wondering whether Ned's ability is a blessing or a curse. Not to mention there's a question of morality surrounding all this. Ned's found a way, alongside private investigator Emerson Cod (Chi McBride), to use his powers to help solve murders, which keeps these people from being forgotten. But, it's not entirely selfless since he and Emerson profit off these tragedies.

The world of Pushing Daisies is magical, yes, but it's also human, which means it's not as fantastical as it appears. The show never attempts to answer the question of how Ned got his powers because the Pie Maker isn't a superhero. Ned wasn't bit by some radioactive spider, he's just a loner who's good at making pies and is struggling to live with a secret.

And just like real life, he's not the only one. Everyone on the show is hiding something — Chuck is hiding the fact that she's alive, Emerson is hiding the fact he has a daughter, and Pie Hole waitress Olive Snook (Kristen Chenoweth) is hiding her crush on Ned — but together they're figuring out how to keep living their lives to the fullest.

Pushing Daisies is a show that's constantly reminding you how precious life is through the often whimsical deaths of others. Time is a constant, which is why the show's narrator (Jim Dale) is constantly counting it down in years, weeks, days and minutes. It's a reminder to keep living so that you don't regret it when it's all over like say Chuck, who lived a sheltered life only to become the "lonely tourist" who was murdered on a cruise ship. "I guess death is as good of an excuse to start living," she tells Ned in the premiere. But, of course, you won't be able to say the same.

This very real "Choose Life" message would be hard to pull off for most shows, but Pushing Daisies isn't like most shows. There is sadness all around, but as Fuller told TVGuide in 2007 "you never get bogged down in the sadness" because the show is "really about human kindnesses." You take the good and the bad, and luckily, Pushing Daisies was really good at portraying the kindness that still exists in people.

It's why Pushing Daisies won Esquire’s TV Reboot Tournament (beating out Firefly, no less) and new fans continue to pick up on the gone-to-soon series that was a critical darling in its time. The show was and still is a delicious escape from the reality of our lives or even other TV shows that seem to equate prestige with darkness.

As the narrator of Pushing Daisies tells us in the 2009 finale, "For endings, as it is known, are where we begin.” Pushing Daisies is gone, but it lives on in the fans who a decade later keep remembering the show as something worth beginning over and over again.