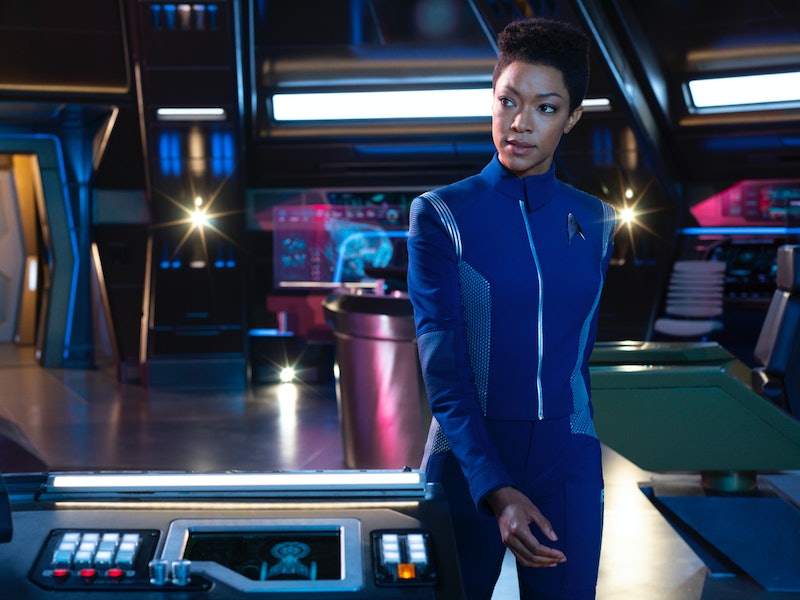 When Gene Roddenberry created Star Trek, he had a vision of a utopian future in which humanity had solved most earthly conflicts like poverty and international war, and where most conflict therefore came from interactions with other species and their multitudinous customs. In that way, Star Trek has always shone a light on humanity's potential by emphasizing what society can achieve through self-betterment, reflecting the diversity of our species, and striving for equality.

Now, over 50 years, five series, and numerous movies later, the cast of Discovery, now heading into its second season, is reflecting on Roddenberry's vision and wondering how his utopian ideals fit into a world that feels so divided. Ahead of the second season's Jan. 17 release on CBS All Access, the cast explained how Star Trek's optimistic vision of the future is helping them survive our current political climate. In the era of the Trump presidency, where xenophobia seems to reign, sexism and racism feel the norm, and specific groups of people are being villainized, it feels more important than ever to remember what Star Trek really stands for.

"Diversity is an essential tenet of Trek," says Showrunner Alex Kurtzman. "Roddenberry's greatest contribution of his vision was that diversity was an assumption. Nobody talked about it because it just was. Gender parity was an assumption, and I think Trek being a mirror to the world we live in, it is more timely than ever to be able to tell those stories, and so we embed them in every choice we make."

For Mary Chieffo, who plays Klingon Chancellor L'Rell, Discovery's embrace of gender equality allows her to explore some of history's forgotten female leaders. Playing arguably the franchise's most prominent female Klingon, Chieffo has a lot resting on her shoulders, and she draws inspiration from feminist history. "Last year it was the Greeks, Antigone and Medea, and now there's this element of Queen Elizabeth. Hatshepsut was this female pharaoh who had all of her images destroyed. She had kind of embodied a certain male image at the time of her rule," Chieffo says of L'Rell's inspirations.

"I feel like so many of these stories have been told by a white male perspective. The Greek plays were written by Greek men and so they kind of skewed to a certain rhetoric. Now that it’s 2018, it's sci-fi, L'Rell is an alien, we take what we love about those women and we give her a little bit more of a fully fleshed out story."

Season 1 of Discovery took a visit to the Mirror Universe, where the brutal Terran Empire rules. Jason Isaac's Gabriel Lorca, as it turns out, was actually from the Mirror Universe, and as Isaac told BuzzFeed, the character was modeled on President Trump. Lorca's barking commands, his indifference to protocol, and his general disregard for life was evidence that he came from a place that Roddenberry's vision had not reached. And for the crew of the Discovery, it was jarring to see their potential for evil.

"The whole experience was seeing how much we don’t want to be that," says Anthony Rapp, who plays Lieutenant Commander Stamets. "None of us want to live in the Terran Empire or have that inform who we are." Season 2, he says, sees the crew "reacting to everything that happened, settling in, and what are the ripple effects from it. How can we continue to be our best selves?"

This is a call to arms for me. I want to step on the battlefield, bring out my weapon of love. It’s the most powerful weapon we have."

Wilson Cruz, who plays Discovery's doctor Hugh Culber and Stamets' partner, chimes in. "It's kinda like how we are as a nation right now for so many of us. We see the consequences of a society like that and we have opportunities to change course. At least we do in our real world, so I hope people take that opportunity. "

Stamets and Culber marked the inclusion of Star Trek's first gay couple, a choice that was celebrated by most fans who understand the real intentions behind Star Trek, and criticized by a few homophobic voices. The inclusion of Stamets and Culber's relationship, however, brings the series closer to Roddenberry's inclusive ideals, and brings LGBTQ representation to a beloved franchise.

"As much as I appreciate this job and this opportunity, I appreciate it more and more as each day passes with this administration because it inspires me to believe that there is a better alternative than the one we have at the moment," Cruz says. "Our jobs as artists is to help people imagine and to help inspire them to imagine a better world, especially in Star Trek. That's what it always has done. It's always asked its audience to imagine what it would be like if we all actually, not just acknowledged and tolerated our differences, but celebrated those differences."

He continues, speaking passionately: "Our version of Star Trek is about the world and the struggle that it takes to create that ideal. It doesn't just happen. It happens because we as humanity make that choice that that's the kind of world we want to live in. I feel that right now we are at a place where we need to start making that choice."

Martin-Green agrees, noting that the opportunity to represent a better world is a once-in-a-lifetime benefit. "It's such a blessing and privilege and honor to be here telling this story with the people I get to tell it with and to further this legacy," she says. "This is a call to arms for me. I want to step on the battlefield, bring out my weapon of love. It’s the most powerful weapon we have."

In that way, Star Trek has presented us with a true challenge, and it's time to start living up to, and creating, Roddenberry's vision of the future.