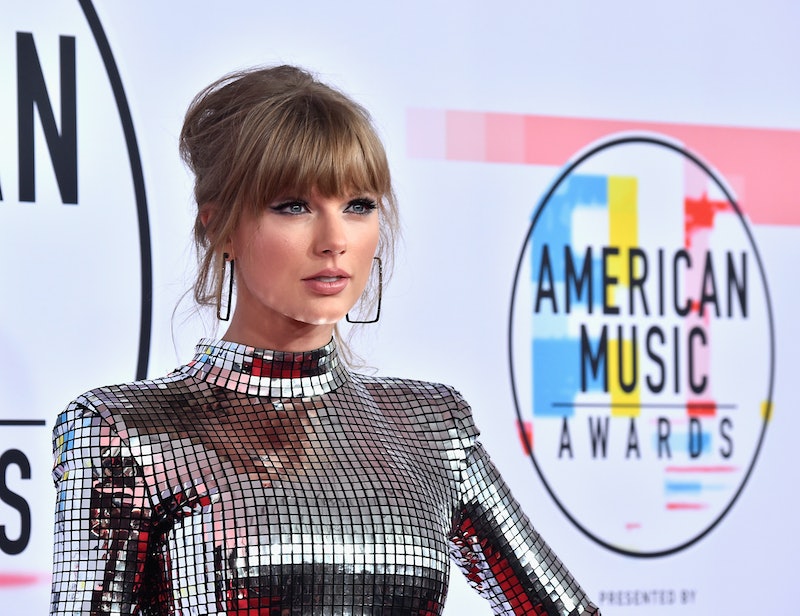 It's the tenth month in the year 2018 and Taylor Swift has finally taken a political stand. In a post shared on Instagram Monday, Oct. 8, the singer threw her weight behind Tennessee's Democratic Representative Jim Cooper and the state's former governor currently running for Senate, Phil Bredesen. She also encouraged young fans to register to vote before the deadline of Oct. 9. Yet though her foray into the political world earned her praise, Swift doesn't deserve adulation for finally speaking up about politics, when it's something she should have done two years ago.

Following Swift's Instagram post, many people have showered her with acclaim, due in large part to the fact that stories published the day afterwards suggested that her message may have led to a spike in voter registration in Tennessee. It is also true, however, that causation has not been proven, and the spike in voter registration could be due to the simple fact that the deadline to register was on Tuesday. But regardless of whether or not Swift personally changes the outcome of this election by inspiring a strong voter turnout, there is no doubt real value in seeing a pop star of her magnitude speak out, no matter the timing. However, her actions are far from deserving of as much praise as they've gotten, because Swift is hardly an activist.

Many people have been begging the singer to speak out for years, especially leading up to the 2016 election. Despite declaring herself a feminist in 2014, Swift was rarely vocal about women's issues, and by the time 2016 rolled around, major outlets like The Daily Beast were calling her out for staying silent on the increasingly misogynistic turn of the presidential election — despite several of Swift's fellow pop stars like Katy Perry, Demi Lovato, Miley Cyrus, and even past Republican (and fellow Southerner) Kelly Clarkson all vocally supporting Clinton.

On Nov. 8, 2016, Swift shared a photo of herself standing in line to vote, though she did not elaborate who, exactly, she would be voting for. But that's as political as she got. To her credit, it's something she acknowledged in the recent Instagram post, writing, "In the past I've been reluctant to publicly voice my political opinions, but due to several events in my life and in the world in the past two years, I feel very differently about that now."

People change, and a big part of freedom of speech is acknowledging that people also have the right to remain silent if they so choose. And maybe something happened to Swift personally in these past two years that inspired her to finally take the leap. However, it is also true that during that time, a lot has happened in the world that could have benefited greatly from a voice like hers.

Now, however, Swift says she stands for LGBTQ rights and believes "that the systemic racism we still see in this country towards people of color is terrifying, sickening and prevalent." And while these statements are all well and good, she hasn't really done much to prove she means them. Though she has been called out for her problematic feminism (or "white feminism") in the past — her silence about the struggles of women of color and her girl squad of mostly thin white women — she doesn't appear to have grappled with it. In fact, it took her years to call herself a feminist, and once she did, she almost always talked about how it related to her specifically. She spoke about how she had suffered from the misogynistic media that called her "boy crazy" because she dared to write love songs, but not about how these stereotypes affect every day women, or even about the first ever female presidential candidate from a major party.

Swift has a similar track record when speaking about the issue of sexual assault. After she sued DJ David Mueller for allegedly groping her during a meet-and-greet, the incident became a courtroom battle when the DJ sued her for defamation. She counter-sued and won a settlement of $1. Later in 2017, Swift appeared on the cover of Time Magazine's 2017 Person of the Year issue featuring "Silence Breakers." Though she spoke a bit about victims of sexual assault in the cover story, something she also addressed at a concert on the one year anniversary of her trial, Swift has mostly remained separate from the growing #MeToo movement. A quick search on Twitter shows that she has never tweeted the words "#MeToo" and "Me Too" — or if she has, they have been deleted. And while Swift has the right to do whatever she so chooses with her social media, there is no denying the power that even one tweet from Swift could have had.

Overall, when Swift has spoken out about potentially decisive issues in the past, people have been quick to point out the convenience to the singer. Many people on Twitter have pointed out the timing of her latest post, which came just one day after the end of her Reputation tour — and just one day before the voter registration deadline. Writer Kate Stayman-London, @_ksl, suggested that Swift waited until now to ensure that all her fans, regardless of political affiliation, would be able to enjoy her tour. But it's also possible that Swift chose to talk now because she knows that, for every conservative fan she might lose by throwing support behind Democrats, she could lose hundreds more of young progressives who expect modern celebrities to speak out politically were she to remain silent. As BuzzFeed's Pier Dominguez put it, "She can no longer function as the adult and relevant artist she aspires to be without taking a political stand."

This might be a cynical view of the singer's actions, but it's not altogether off base. The fact is that Swift has chosen to speak up at a time that is good for her, and as columnist Michael Harriot of The Root put it, Swift's decision to be political now speaks to her privilege. "When you attributed your revelation to 'several events in my life and in the world in the past two years,' I could only think about how nice it must be to ignore discrimination, homophobia and racism until it affects you personally," Harriot wrote.

By talking politics now, Swift is risking less than she would've in 2016, when tensions were at an all time high. The recent tepid backlash she received from Donald Trump is proof of that. Trump, a man known for pulling no punches, especially when it comes to his female critics, was quite tame when responding to Swift's post. He did not call her a "low I.Q. individual" like he did Maxine Waters. Nor did he make a disparaging comment on her appearance, like he did to Heidi Klum or even Megyn Kelly. All he has said publicly on the matter is that he likes her music "about 25 percent less" than he did last month, which is to say that there is a small chance that the president is currently dancing around the White House to the tune of "Shake It Off."

Meanwhile, right wing political pundit Tomi Lahren even issued a statement in support of Swift, tweeting that despite her politics, "Taylor is a far better role model for girls than 99% of the celebs out there. Still #TeamTaylor."

Furthermore, both Trump and Lahren used the talking point that Swift isn't necessarily a Democrat, but she just simply doesn't understand what she's talking about. "I'm sure Taylor Swift doesn't know anything about her [Republican candidate Marsha Blackburn]," Trump said. Meanwhile, Lahren wrote that she believes that Swift's "attitude would change if she knew more about Marsha and her record." It might seem like a shallow tactic to try to keep Swift fans from following her lead into the Democratic Party, but it's also a way of holding onto the singer as a potential Republican figure. It's not that she's necessarily a Democrat — the singer did not mention any party affiliation in her post — but according to Lahren, she's just ignorant about the Republican candidate in her state.

And therein lies the rub. Swift may be taking a stand now, but her long history of silence will allow for this kind of spin to flourish. The only reason Trump and Lahren want to make this kind of argument, it seems, is to hold onto Swift as "their" celebrity. And her timing and past silence about her political affiliations will enable this narrative.

It might be true what people say — better late than never — and there is no question that what Swift did was important. But when someone is this late to the political party, it's not praise-worthy. Not even close. Call me when she tweets in support of ordinary women who are going through hell to hold powerful men accountable. Call me when she uses her platform to fight for Black Lives Matter, a woman's right to choose, or immigrant rights. Until then, I'm just not interested in holding Swift up above the rest.