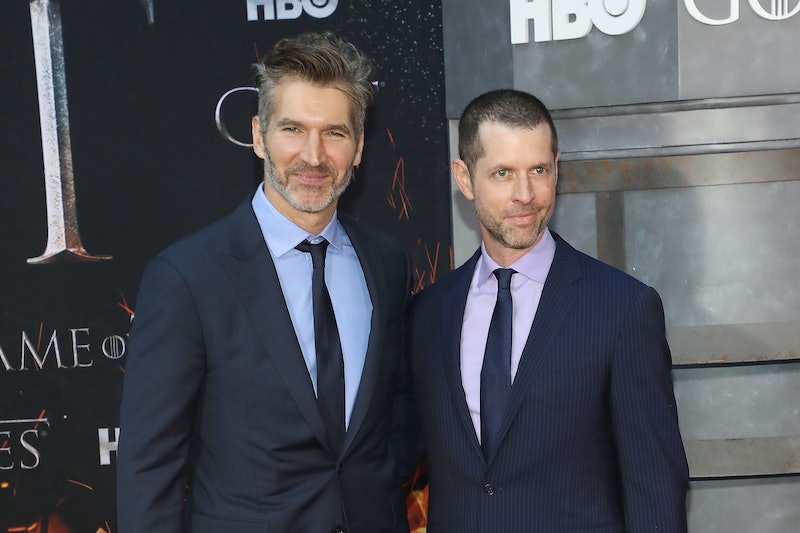 Now that they've left Westeros, the Game of Thrones creators are also leaving a galaxy far, far away in order to focus on other projects. On Tuesday, Lucasfilm executives announced GoT creators David Benioff and D.B. Weiss have left Star Wars and will no longer helm a new saga in the beloved franchise. The pair originally announced their plans to launch a new Star Wars trilogy in February 2018, with the first film in the upcoming saga set to arrive in theaters in 2022.

However, in August, Benioff and Weiss signed a multi-year deal with Netflix worth a reported $200 million in order to develop multiple movies and TV shows with the streaming service. With so many new projects on their plate, the pair explained in a statement to The Hollywood Reporter that they were unable to devote enough time to their Star Wars trilogy and decided it would be best to step away. "There are only so many hours in the day, and we felt we could not do justice to both Star Wars and our Netflix projects," Benioff and Weiss said.

Despite their decision to "regretfully" bow out of helming a new Star Wars saga, the pair made their love for George Lucas' franchise clear in their joint statement, revealing those movies inspired them to become filmmakers. "We love Star Wars. When George Lucas built it, he built us too," Benioff and Weiss explained. "Getting to talk about Star Wars with him and the current Star Wars team was the thrill of a lifetime, and we will always be indebted to the saga that changed everything."

Benioff and Weiss' departure from the Star Wars franchise comes after the pair endured a great deal of backlash from fans regarding GoT Season 8 and the way certain storylines ended. In May, fan Dylan D. launched a petition on Change.org requesting that HBO remake the final season of the fantasy saga with "competent writers," which the pair finally commented on at the 2019 Emmys in September. "It’s not really up for us to decide what people feel about it. We hope that they watch it and like it in the future," Weiss told reporters in the press room after the ceremony. "The landscape of television changes so quickly; it’s changing right now as we’re standing here. It’s so gratifying to have reached this many people."

Benioff also explained that one of the finale's most controversial moments — in which Bran (Isaac Hempstead-Wright) became the new King of Westeros — was part of the plan from the very beginning. "It was always going to be Bran as the king at the end," he told reporters. According to the actor himself, Bran's fate was predetermined: "David [Benioff] and Dan [Weiss] told me there were two things George R.R. Martin had planned for Bran, and that was the Hodor revelation, and that he would be king," Hempstead-Wright said. "So that’s pretty special to be directly involved in something that is part of George’s vision."

While the GoT fandom may still be coming to terms with the way the fantasy series ended, Star Wars fans have quite a bit to look forward to in the years to come. In addition to The Rise of Skywalker, which will be released in December, and the Mandalorian series arriving on Disney+ in November, there are at least four more Star Wars films on the way, helmed by Marvel president Kevin Feige and The Last Jedi director Rian Johnson.

Benioff and Weiss' relationship with the Star Wars franchise may have come to an end, but with a multi-project Netflix deal ahead of them, it's safe to say this isn't the last fans will get to see from the men who helped bring Westeros to life.

More like this
Anne Hathaway Shared A "Thrilling" 'Princess Diaries 3' Update
By Darshita Goyal
The 'Scream 6' Trailer Shows Off Hayden Panettiere's Return & Ghostface In NYC
By Jack Irvin and Jake Viswanath
'GoT' Star Emilia Clarke Says She "Just Can't" Watch 'House Of The Dragon'
By Brad Witter
Rupert Grint Just Shared A *Major* Update About Ron Weasley’s Future
By El Hunt
Get Even More From Bustle — Sign Up For The Newsletter
From hair trends to relationship advice, our daily newsletter has everything you need to sound like a person who’s on TikTok, even if you aren’t.