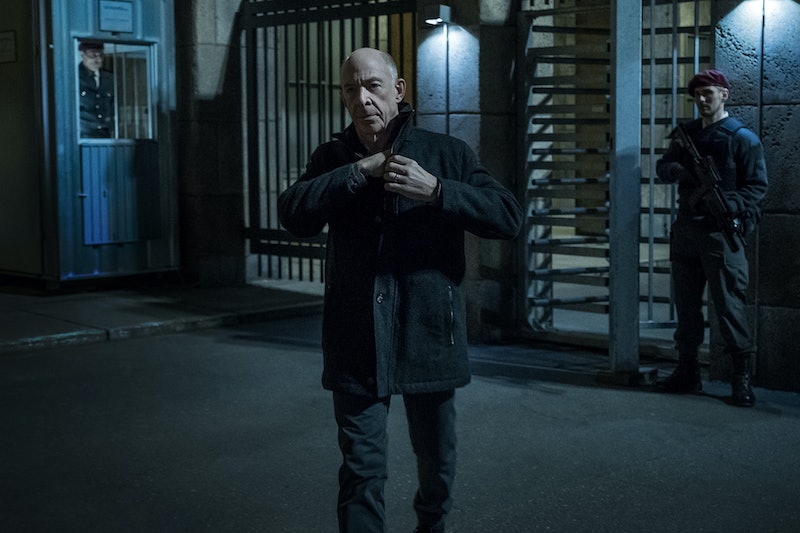 Starz' new science-fiction spy thriller Counterpart (executive producer: Amy Berg) combines the intrigue of international espionage with the mystique of parallel dimensions. Though they don't have a lot in common as far as specific concept, fans of HBO's Westworld (co-producer: Susan Ekins) may find that Counterpart fills that hole during the former's hiatus. Westworld fans should watch Counterpart for many more reasons than just the genre connection. The Starz drama's premiere episode establishes another rich fictional world that audiences can trust is more than what it initially seems. Minor spoilers ahead.

What Counterpart (series film editing, 4 episodes: Dana E. Glauberman) lacks in robots, horses, and robot horses, it makes up for in some of the storytelling structure that made Westworld the water cooler hit of 2016. The Starz series may not feature a mystery as obvious as Westworld's maze, but the questions raised by the show's premiere episode suggest that the heady sci-fi questions in Counterpart could lead to answers even more shocking and more surreal than those in Westworld's first season. (And that's not a low bar to leap over.)

Looking for more reasons why Counterpart can fill the Westworld-shaped hole in your heart? Here's what Westheads have to look forward to in this spy-fi thriller:

More than anything else,Westworld was defined by some of the wild twists and turns that came throughout the season and the internet theorizing that picked up on these major twists weeks before their reveal. Westworld's plot resolutions may not have been obvious to all at first, but as the truth was slowly laid out across the first season. Counterpart's story so far seems less ambitious in scope than the sprawling, ensemble-cast Westworld, but features just as many mysteries begging to be solved. What is the nature of these parallel universes? What went differently in each to cause paths to diverge? Who is sneaking between universes? Get ready to take to the internet because Counterpart has plenty of plot points to discuss.

Sci-Fi With A Twist

Sci-fi is seeing a new golden age on television, from anthology series like Black Mirror to small-town monster mystery Stranger Things and even the return of Star Trek. However, while those shows tend to stick to tried-and-true structures of science-fiction, Westworld and Counterpart use science-fiction as a jumping off point to explore the beats of other genres. While westerns or spy thrillers may not be every sci-fi fan's cup of tea, both shows mix their respective genres to cover new ground in both. Counterpart creator Justin Marks revealed to press at a preview event that Bustle attended, "My favorite genre is the kind that tricks you into realizing it’s genre to even begin with."

While Westworld could be summarized succinctly as a "Western with robots," doing so would be a disservice to one of the most philosophical television shows in recent memory. Just as Westworld used its unique set-up to explore themes of humanity, death, and entertainment, Counterpart is also introducing some big ideas. Through the concepts of parallel universes and parallel selves, Counterpart is exploring themes of regret, loss, and the purpose of life. J.K. Simmons' character — well, first character — Howard has to reexamine his own life when he meets a very different self from another world.

Counterpart is bringing the same elements that made Westworld an internet sensation to a brand-new genre mash-up. While it may be tempting to spend the rest of the break theorizing about what could happen in Season 2 of the HBO show, Counterpart offers brand new puzzles to pore over, plus some more opportunities for existential reflection.