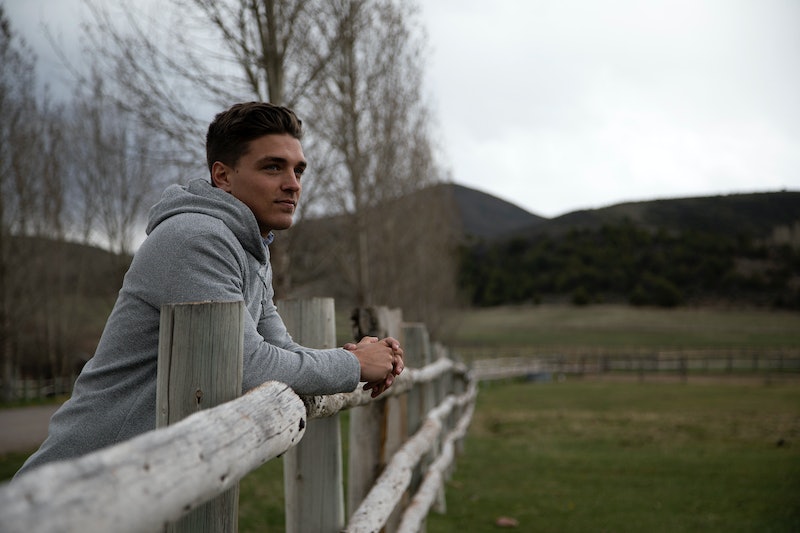 Few Bachelorette moments have been quite as heartbreaking as seeing Rachel send Dean home after telling him she was falling in love with him. The internet was crushed. And so was Dean. Now that he's officially been eliminated, the question on everyone's minds is will Dean be the next Bachelor? ABC is staying mum for now, but this fan favorite deserves to find love, and his time spent trying to win Rachel's heart proves it.

At 26, Dean is a young guy, and some of his fellow contestants made snide remarks about him being too young or immature for Rachel. Here's the thing though, this guy is not immature in the least. During his time on The Bachelorette, Dean revealed a great deal about himself. He lost his mother at a young age, he has a fractured relationship with his father, and a stable job. He's the kind of guy who is willing to face his fears, whether they're heights or a hometown date that he knew would be draining for him. Most importantly though, he always treated Rachel with respect, even after she sent him home.

When his elimination aired, Dean posted a sweet message to Rachel on his Instagram. He wrote,

"From then til now, what an incredible journey. I have nothing but the utmost love and respect for @therachlindsay and I'm excited to watch the rest of her love story unfold #letloveleadtheway"

Bachelor Nation is officially in love with Dean, and for good reason. He appears to be the real deal, and fans want to see him continue his journey to find a partner.

Dean is scheduled to appear on Bachelor in Paradise, so he could fall for someone during his time on the island. But fans are keeping their fingers crossed that he gets his own season of The Bachelor. No matter how much you adore reality TV, you have to admit that it can sometimes feel forced. Dean never felt fake. He was unafraid to show his emotions to Rachel and the world. He was open and sincere in a way that made him endlessly watchable. And isn't that the key to good TV?

Dean seems more than ready to find someone to share his life and his passions with, and his fans want to watch it happen. All that's left now is for ABC to lock Dean down as the next Bachelor, so his fans can finally have the satisfaction of seeing him get the happy ending he deserves.

More like this
It’s Official: 'The Bachelorette' Is No Longer A Fairy Tale
By Samantha Allen
Everything To Know About 'Bachelor' Host Jesse Palmer
By Justice Namaste and Radhika Menon
Here's Our Ranking Of The Funniest 'Bachelor' Casting Ad One-Liners So Far
By Grace Wehniainen
Former 'Bachelor' Producer Elan Gale Knows The Secret To Your Favorite Shows
By Samantha Rollins
Get Even More From Bustle — Sign Up For The Newsletter