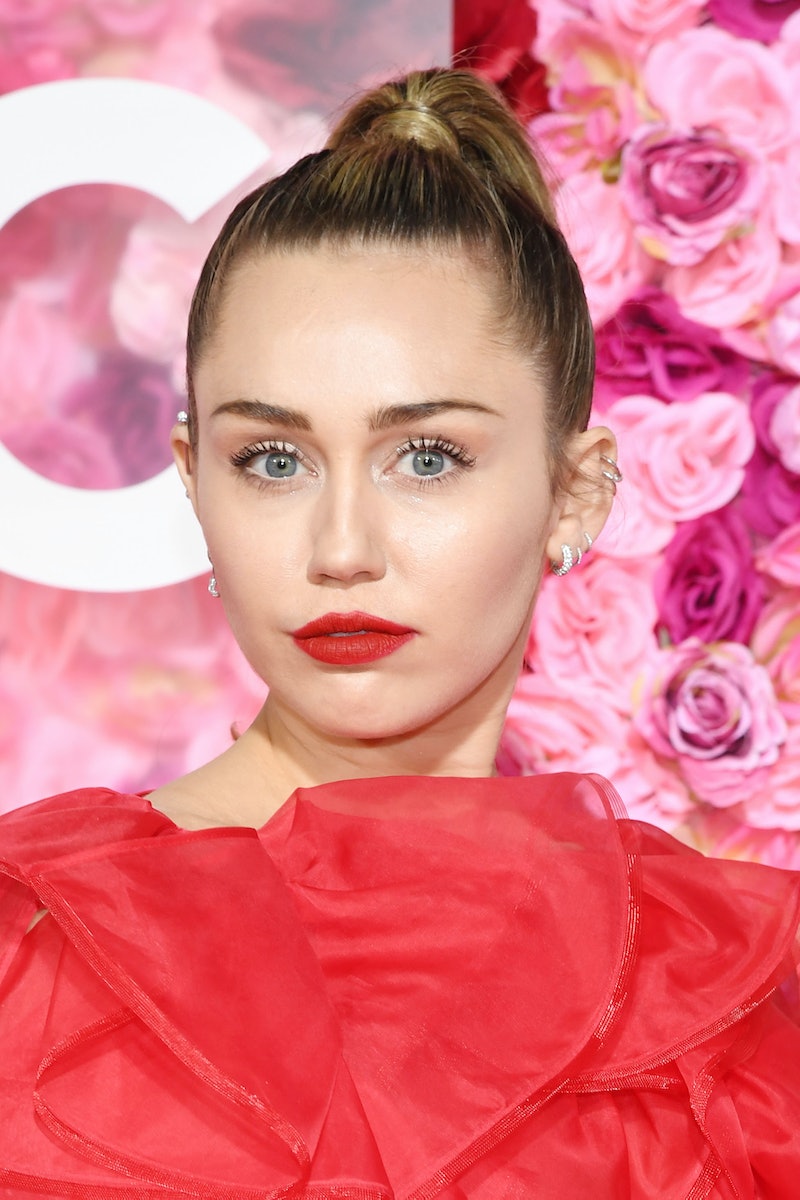 August has been kind of a rollercoaster month for one famous pop star. First, she split from her long-time love. Then she went on a vacation to Italy that got tongues wagging. And then she released a new song, kind of out of nowhere. So, will Miley Cyrus be at the 2019 VMAs, you wonder? The awards show is going down on Monday, Aug. 26, and honestly, no one would blame her if she decided to skip it this year. She's not going to do that though — she'll definitely be there, believe it or not — and it might end up being her most emotional appearance to-date.

Mere hours before the 2019 Video Music Awards were set to begin, MTV surprised fans with an unexpected addition to the show's already star-studded lineup of performers. The network made the announcement via the @vmas Twitter account, and included a super-short video showing various clips of Cyrus.

".@MileyCyrus is coming," the caption read. "Watch her perform her new song 'Slide Away' for the first time ever TONIGHT at the #VMAs."

Yeah, so, not only will Cyrus be there, and not only will she be performing a new song live for the first time, but the song she's performing is "Slide Away" — a song that many people have said is about the dissolution of her marriage with Liam Hemsworth. Guess she's just going to go ahead and rip the band-aid off with this one, huh?

Cyrus is no stranger to being on stage at the VMAs, but the fact that she'll be singing this song, in particular, is a pretty big deal. It's incredibly personal and incredibly emotional, and getting up there to perform it in front of peers and people that have no doubt heard at least some of the rumors, well ... that takes a lot of guts.

"[Releasing 'Slide Away'] was her way of telling her story without having to say anything at all," a source told People about her decision to put out the song so soon after she and Hemsworth announced their split. "She isn’t trying to bash [Liam], but she wants to be able to share what she’s been going through," the insider added.

In case you haven't heard it yet, the opening lyrics to "Slide Away" go, "Once upon a time, it was made for us / Woke up one day, it had turned to dust / Baby, we were found, but now we're lost / So it's time to let it go." Cyrus then goes on to seemingly allude to some of the difficulties she and Hemsworth endured during their relationship, and the whole thing is pretty heart-breaking.

News that Cyrus and Hemsworth had split first surfaced on Aug. 10. While some fans held on to hope that their separation would only be temporary, TMZ reported that Hemsworth had filed for divorce on Aug. 21, and cited "irreconcilable differences" as the reason for the split.

So, if you're planning on watching the VMAs tonight, you're definitely going to want to have a box — or five — of tissues nearby before Cyrus takes the stage. Her performance of "Slide Away" has the potential to be pretty therapeutic for her, though, so hopefully it ends up being a positive experience.