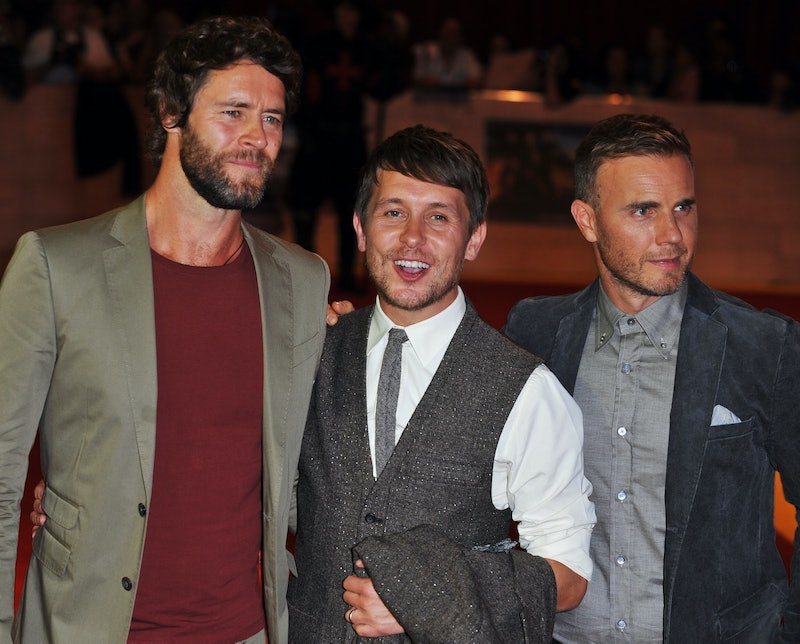 This year's season of The X Factor has had a lot of excitement already, and one host in particular has proven to be an absolute barrel of laughs. Yes, Robbie Williams has brought all the requisite LOLs. But, will he give fans what they all want? Will he get his old gang back for a gig? Will Take That perform on X Factor?

Well, there has been no confirmation regarding a potential Take That appearance, despite how much fans are wishing that the original line-up of the ultimate mega star pop band Take That reunite. However, what we do know is that Williams is going on tour in South America in November, which would make a Take That on X Factor reunion pretty tricky. However, he wraps up his tour long before the final of the show, meaning that a surprise performance could very well be possible.

I reached out to an X Factor spokesperson to see if they could give me any clues as to what may be in store. Unfortunately, a rep is yet to get back to me with all the juicy detail, but as soon as they do, believe me, you will be the first in the know.

I don't know about you, but I've already got my ticket sorted because the Take That tour looks like it'll be epic. I mean, Take that are one of the biggest boybands in history, founded way back when in 1989. OK, so in other words, they have been a thing for like almost 30 years. Yikes, that is no mean feat. In that time they have won a crazy amount of awards and changed the line-up a few times. With Williams leaving in 1995, only to briefly return in 2010, and Orange throwing in the towel back in 2014.

There has been a lot of speculation regarding Williams potentially rejoining the band, pretty much since the moment he broke endless hearts and left the band, all those years ago in July 1995. However, it was some time before he would reunite with his pals as he went on to fight his personal demons including a substance abuse problem, alongside a very public and open battle with mental health issues.

Fighting against the odds, Williams has managed to carve out a very successful solo career, which has seen him have multiple number one hits, win awards, and travel the world. Speaking to The Sun about his personal issues, he made it clear that maturing has been a huge wake up call to him:

"Once you’ve been on the planet for 43 years, you realise that — even if you’ve got everything that I have — you’re not invincible. So from now on I’m going to look after myself a lot more carefully".

While busy as a music mega star, he also managed to meet his soul mate in the form of Ayda Field. The two have three children together, one of whom lived her best life as bridesmaid at Princess Eugenie and James Brooksbank's wedding.

But back to those Williams reuniting with Take That rumours; look, there is plenty of time left until the finale of this season's X Factor. Although there hasn't been an official confirmation, I wouldn't panic just yet. The show usually doesn't confirm its live acts until a week before they are set to perform. With that in mind, us Take That stans have every reason to be hopeful.