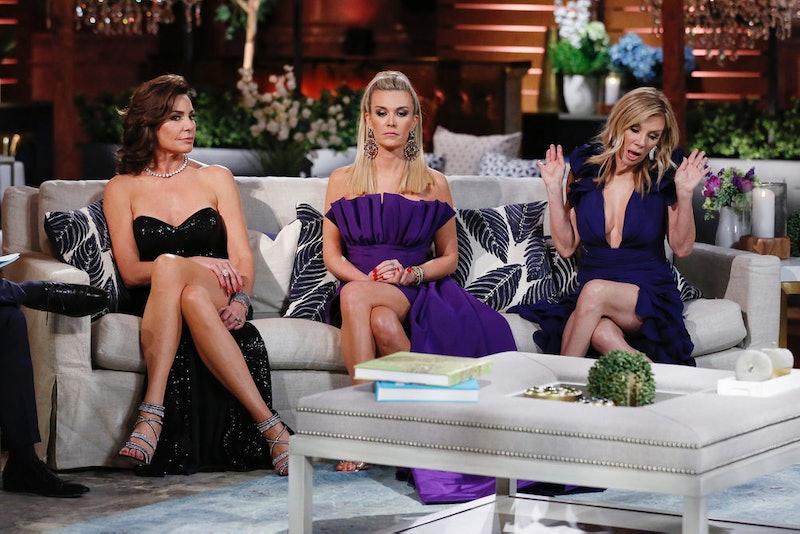 There are places where one may not feel so safe — a haunted house, an abandoned building after dark, covered in peanut butter at a doggy daycare. But no situation is so tenuous than of the one of being a castmember of a Real Housewives franchise. One year, you could be riding high, but the next? Kaput. You’re out. Even “OG of the OC” Vicki Gunvalson has been demoted by now. And since the cast of Real Housewives Of New York has insinuated that Tinsley Mortimer doesn’t even live in New York City anymore, it's possible that Tinsley won't return to Real Housewives Of New York Season 12.

During part two of the Real Housewives Of New York Season 11 reunion, Bethenny Frankel pointedly told Tinsley that she doesn’t even live in New York anymore, and Tinsley did not deny it. Her lack of residence is why, the other castmembers explain, Tinsley lives in a hotel — which is colossally expensive — instead of finally finding an actual apartment to rent and live in. Tinsley put up the guise of looking for a lease when she first got on the show, but now, she’s not even trying.

She’s in New York sometimes, in Palm Beach the rest, and that’s that. And if she’s still with Scott Kluth, her ex, she’s in Chicago, too. (Tinsley has mentioned repeatedly that she and Scott are completely over, but hey — you never know.)

As far as Season 12 is concerned, there has been no official word from Bravo, according to Hollywood Life, of who and who has not been asked back. It could be safe to assume that Bethenny and Dorinda, who always bring the drama, will return to the show, and Barbara Kavovit, poor, sweet, Barbara, probably will not. According to Us Weekly, a source confirmed that Tinsley would be returning for Season 12, and The Daily Mail reports that she has two years left of a five-year contract, so Tinsley is sticking around. As previously mentioned, though, there’s been no official word from the network, so anything else is simply speculation. Surely, Tinsley would only leave if she had to. What else would we do without her huge eyelashes and twinkly personality?

If Tinsley returns for Season 12, her storylines will more than likely focus on her dating life. Tinsley had been dating Scott for a few years on the show before they broke up, and now the 43-year-old Tinsley is single and ready to mingle. And, you know, she still has those eggs on ice.

During an appearance on the Watch What Happens Live After Show, Tinsley said that the best is yet to come for her.  "I had a lot going on this year, and I just feel like I did my best to share and be open, and I really was," she said. "I feel like I'm hoping for the best next year. I think it's my year and I'm gonna be good."

Tinsley has recently been linked to former Access Hollywood host Billy Bush, so it seems as though she’s already getting out there. It seems silly to have a Housewife that doesn’t actually live in the city she’s representing on the show, but since the only proof we have of that is Bethenny’s word and maybe Tinsley’s hotel bill, it’s up for Bravo to decide. And when Bravo does decide the women’s fate for Season 12, Tinsley will be ready for something new.