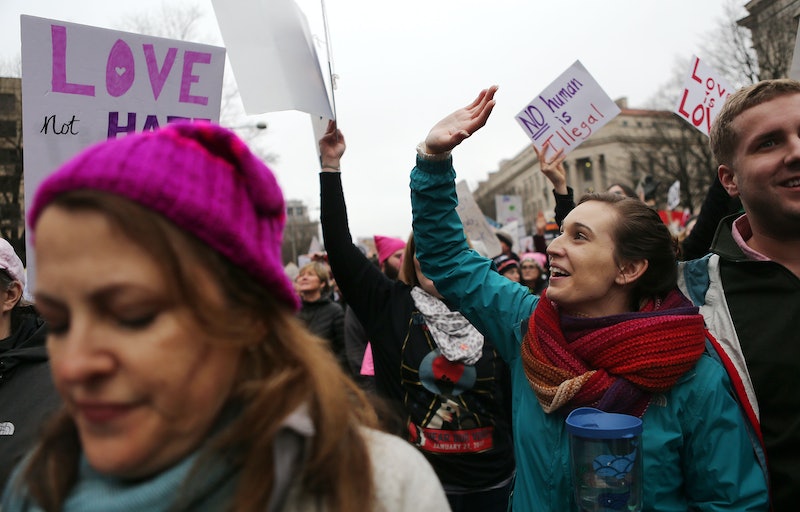 Both pop culture and popular "wisdom" frequently depict women as out to compete with one another. But is competition among women as common as we think, or is it just a stereotype? A new study from the University of Pennsylvania, George Mason University and, the German Institute for Economic Research suggests it's the latter — which, in turn, prompts an important followup question: If women don't actually like to compete against each other, than why does the myth persist that they do?

The researchers gave out quizzes to around 600 men and 600 women. In the first round, they got paid every time they answered a question correctly. In the second, they got paid twice the amount for each correct answer if they scored higher than an opponent and got nothing if they scored lower. Then, for the third round, they got to choose whether they competed against their own scores or their opponents'. 58 percent of the men decided to play against others, while only 38 percent of women did.

Study author Coren Apicella told Medical Daily this difference probably boils down to the confidence gap. Since women tend to think less highly of their abilities, they're less likely to take the risk of testing them against someone else's.

Regardless of the reason behind it, this finding detracts from the commonly-made argument that women are by nature more competitive than men. It also makes a compelling case for why the myth of women being inherently catty and competitive needs to be put to bed once and for all.

We've seen time and time again that the stereotype simply isn't true. The recent Women's March on Washington, for example, brought thousands of women together in solidarity. Women affirmed one another's rights on their flights to the protest and in the march itself, which included over a million people around the world. And from Lean In circles to Women Who Code, plenty of women are mentoring and supporting one another in their careers.

So why do we still view women as unable to get along?

The media certainly doesn't help. From Mean Girls to The Devil Wears Prada, pop culture frequently reinforces the stereotype of catty, competitive women. Even feminists often accuse women of undermining feminism by tearing one another down, as if internalized misogyny is a product of cattiness.

But it's not. When women do view one another as threats, that's often because of patriarchy. Women are taught from an early age that their value lies in their ability to appeal to men — so when another woman appears to be winning on that front, it might cause jealousy. But that's a result of our oppression, not a quality inherent to our natures.

A few years ago, advice columnist Amy Alkon wrote in The New York Observer that climbing the corporate ladder is dangerous for women because evolution "leads to some 'very confusing' (and often ugly) relationships, with women as covert competitors, using tools including gossip and social exclusion to push down other women, especially any who dare to stand out." But while she and others have employed science to argue that women are naturally competitive, it's important to remember that there's also research — and plenty of real-world examples — suggesting otherwise.