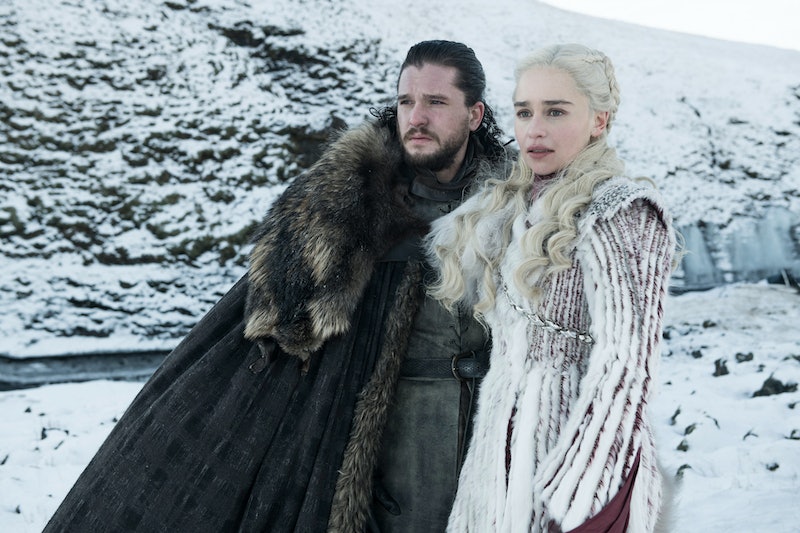 In honor of the upcoming premiere of the eighth and final season of Game Of Thrones, online dating platform OkCupid has something fun up its heavily armored sleeve: You can now put a Game Of Thrones badge on your OkCupid profile. Just, y’know, in case you want to spread your love of the show far and wide throughout the Seven Kingdoms, across the Narrow Sea, north of the Wall, or anywhere else in the world. There’s no better way to connect with like-minded folks, right?

I’m admittedly a little out of the loop about how OkC works these days — I did meet my spouse on it (and yes, we’re both Game Of Thrones/A Song Of Ice And Fire fans), but that was 10 years ago, and both the platform itself and the online dating scene more generally has changed a lot since then — but I do know that how the matching process works is still fundamentally the same. OkCupid shows you people with whom you’re potentially compatible based on how high a match percentage you share. Your match percentage with someone is determined by a few factors: Whether their self-identified demographic matches what you’re looking for; whether your self-identified demographic matches what they’re looking for; and how you both answer OkCupid’s match questions.

It’s not always as simple as whether you both answer the same questions similarly, though; the algorithm also considers factors like whether you’re specifically looking for someone who answers particular questions a certain way and vice versa, whether you agree on what you consider to be super important, and so on. The algorithm is by no means flawless, but it can be pretty accurate.

Getting the Game Of Thrones badge, however, is pretty simple: All you have to do is publicly answer the question “Do you watch Game of Thrones?” with “yes.” If you do that, the badge will become prominently displayed, thereby enabling you to connect with other fans of the show (and/or book series).

What’s the point of the badge? Mostly fun — but also to increase engagement between users. Historically, the introduction of badges that say something strong about your likes and viewpoints has resulted in net positives for those who display them. For example, about a month after the “Right To Love” badge in support of the American Civil Liberties Union (ACLU) debuted during the summer of 2018, OkCupid Marketing Officer Melissa Hobley told The Hill that users were “100 percent… more likely to go on a date” if they had the badge displayed on their profile. Based both on this phenomenon and the fact that there are nearly two million mentions of Game Of Thrones in profiles across the platform, OkCupid predicts that folks with the badge will end up with 20 percent more likes and 15 percent more conversations than those without it.

There are a few other Game Of Thrones questions in the mix, too, by the way — so for fun, OkCupid cross-referenced them with some other queries to get something of an idea of how people’s Game Of Thrones views might reflect other thoughts, opinions, and viewpoints they have. For example, people who list Brienne of Tarth and Tormund Giantsbane as their relationship goals are more likely to say it’s important to challenge traditional gender roles in dating; however, people who say Khal Drogo and Daenerys are their relationship goals are less likely to want to challenge gender roles in dating. Drogo/Dany fans are also more likely to say they’re looking for one-night stands or flings, while folks who consider Ned and Catelyn Stark relationship goals are usually looking for long-term — possibly life-long — relationships.

There is, however, one thing on which many folks agree on: Most people — between three-quarters and 85 percent — want Jon Snow and Daenerys to win the Game of Thrones. So, y’know, there’s that.

Game Of Thrones’ eighth season premieres on HBO on April 14. If you and your viewing party date are both wine, beer, or whisky fans, here’s what to drink while you watch. Have fun — and remember: In the Game of Thrones, you win or you die. May the best ruler win.