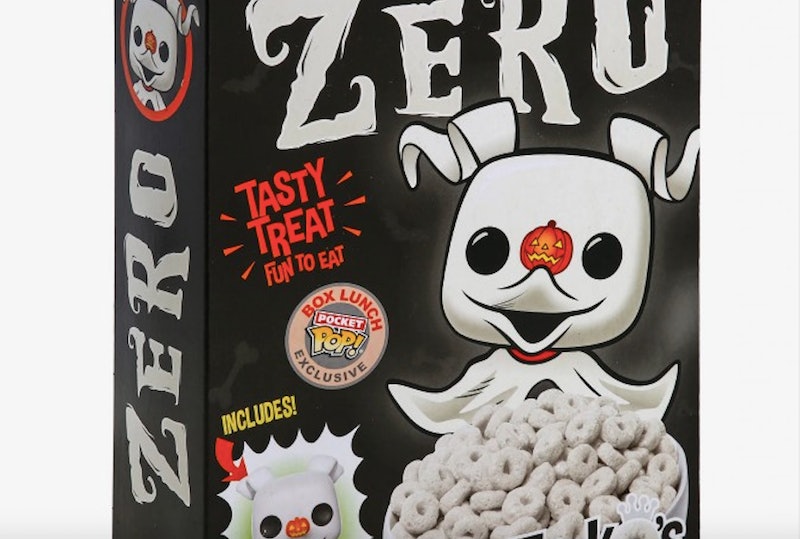 Some people consider The Nightmare Before Christmas a Halloween movie. For others, it’s a Christmas movie. Me, though? I’ve always considered it to be both — so naturally, knowing that I can now get FunkO's cereal themed after Zero, the Nightmare Before Christmas’ faithful pooch, I plan on eating the stuff for breakfast every day between now and… oh… let’s say New Year’s. That covers the entire fall-to-winter holiday season, does it not?

The Zero cereal is the latest FunkO’s release — FunkO’s being the cereal brand launched last year by Funko, the company behind those ubiquitous Funko POP! vinyl collectibles we've been seeing everywhere for what seems like forever. A Box Lunch exclusive, the Zero-themed cereal arrives in a black box adorned by a super-cute cartoon rendering of Jack Skellington’s faithful skele-pup. The cereal itself is a little less colorful than FunkO’s often are; to go along with the ghostly theme, the little doughnut-shaped, multigrain pieces are a plain white. A maze on the back of the box meant to look like Zero’s doghouse keeps you occupied while you nosh — and nosh you shall, because how else are you going to unearth the toy hidden in the box?

That’s the big gimmick with FunkO’s, after all: Not only are the cereals themed after all your favorite pop culture properties and characters, they also contain a little Funko Pocket Pop figure of the character in question, to boot. The Pocket Pops are tiny — about an inch and a half high — but honestly, that just adds to the appeal. (Fun fact: The reason we think tiny things are so cute is because we’re hard-wired to want to take care of and protect things that look like babies.) In this case, the Pocket Pop is of Zero himself — and guess what? He even glows in the dark. Heck, and yes.

A box of Zero FunkO’s will set you back about $11; you can order it online at Box Lunch’s website.

FunkO’s originally launched in 2018 with just six varieties: Mega Man (from the video game series bearing his name), Cuphead & Mugman (also from a video game — Cuphead was released to great acclaim in 2017 ), Freddy the Funko mascot, Freddy Krueger (not to be confused with Funko Freddy) of Nightmare on Elm Street, Jason Voorhees of Friday the 13th, and Gollum from Lord of the Rings. New “waves” of themed cereals have been released regularly since these first six varieties dropped, frequently as exclusives for specific retailers; they’re also viewed by many more as collectibles than as breakfast, due to the fact that once they’re gone, they’re, y’know, gone.

There is, admittedly, a lot I don’t know about the Funko cereals. I don’t know, for example, whether they all taste the same, or whether they each have their own unique flavor; and, alas, reviews — that is, the kinds of pieces you’d expect to contain this information — are somewhat sparse, as clearly no one buys Funko-branded cereal for the cereal. (That’s what the spectacular box art and the adorable Pocket Pops are for.) The upshot is that I’m unclear on what exactly we can expect the Zero FunkO’s to taste like. I mean, sure, they look like Frosted Cheerios, but do they taste like them? Who knows!

For what it’s worth, though, the varieties of FunkO’s I have seen reviewed all seem to be more in the fruit-flavored category than the gourmand arena. Dinosaur Dracula described the Jason Voorhees cereal as sort of “lemon gelato”-like (and, as Dino Drac mastermind Matt put it in his video review of the stuff, “The fact that Funko would give Jason Voorhees a lemon gelato-flavored cereal? That is just… great. Just… so great.” Side note: It’s a very funny review; 10/10, would absolutely watch again); Cerealously noted that the second Cuphead cereal, Don’t Deal With The Devil, was “orangey and lemony, with perhaps a touch of lime and guest-starring blueberry”; and one reviewer of the Beetlejuice cereal on Amazon wrote that it tasted “like Froot Loops.”

The Zero cereal isn’t the first Disney-themed option to join the FunkO’s line; it’s not even the first Nightmare Before Christmas option to hit shelves: At the beginning of August, a bright green Oogie-Boogie version showed up at Spencer’s and Spirit Halloween. As much as I love Oogie, though, Zero will always have my true heart; how can you not love the little guy?

You can pick up a box of Zero FunkO’s for yourself at Box Lunch — or, if you’re not down with paying $11 for a box of cereal, go get yourself an IT Frappuccino at Starbucks and call it a Zero Frapp instead. (The color scheme is the same, after all!) Happy almost-Halloween!