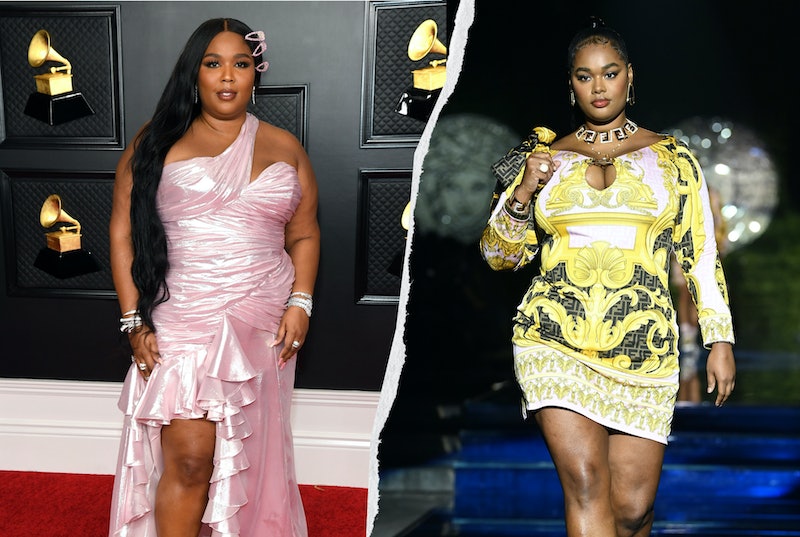 Though 2021 was a year of uncertainty for the fashion industry, as several retailers and brands shuttered during lockdown, the plus-size sector saw growth like never before. From Lizzo’s “Rumors” video that depicted curvy women as royalty to the Met Gala red carpet, where models like Precious Lee posed in luxury fashion, there was a major increase in visibility for people above a size 6, says fashion writer Gianluca Russo. But there’s still much more to accomplish.

While writing his book The Power of Plus, which launches on Aug. 16, 2022, Russo uncovered challenges in the modeling industry that must be overcome in order to achieve true size inclusivity. “It’s saddening to hear how backwards it is,” Russo, 24, tells Bustle. “Some of today’s top modeling industries are emotionally harming plus-size models for their size while, to the public eye, praising them for the press. They use plus-size models to get the pat on the back, then behind-the-scenes, treat them [like they are] disposable.”

That reality, alongside issues like “racism, fatphobia, and accessibility,” inspired Russo to write The Power of Plus in the first place. “When Fashion Week rolled around in September 2019, I found myself in conversation with over 50 plus-size advocates over the span of a week who shared the most emotional, moving sentiments with me,” he says. “The book is a vessel to tell their authentic stories, to celebrate their accomplishments, and to also discuss the issues we still face today and how we can push this movement to the next level.”

Russo envisions a future where plus-size fashion no longer needs to be a separate conversation. “The future [will be] a time when we can all shop at the same stores, where teens can enjoy mall trips without feeling othered, and when sizes and labels are a thing of a past,” says Russo. “What I hope we see next is a celebration of the spectrum of bodies and races in our community. That is one of the biggest issues that stands before us: the promotion of the ‘perfect plus’ hourglass body. We need to see all bodies, all types of people, because that is true representation.”

While he acknowledges that plus-size fashion has a “long way to go,” Russo believes “we need to celebrate every win along the way while making space to tackle the shortcomings.” Ahead, he walks Bustle through the nine most memorable plus-size wins from 2021.

“It’s so rare to see plus-size women depicted as queens and goddesses, so Lizzo knew exactly what she was doing with her ‘Rumors’ music video,” says Russo. “She made plus women the main character in the most refreshing, inspiring way, and that’s the kind of imagery we need more of in the world to show that fat folk are more than just worthy: They’re aspirational and gorgeous, too.”

“It’s about time designers started to appreciate Precious Lee’s beauty. Walking for Balmain, Versace, Moschino, Michael Kors, and a ton of other designers, she really showed how spectacular plus-size women can be, and how limitless they are. I hope more designers take note of that in the seasons to come.”

“When we talk about inclusivity in fashion, it often feels like plus-size models are still placed on a lower level than their straight-size counterparts. But this September’s American Vogue cover showed a spectrum of bodies, placing all women on the same level. And seeing both Precious Lee and Yumi Nu alongside names like Kaia Gerber and Bella Hadid was truly breathtaking.”

Plus Celebrities At The Met Gala

“We rarely see plus-size women at the Met Gala, so this year was such a treat. Precious Lee, Paloma Elsesser, NikkieTutorials, Barbie Ferreira, and Whoopi Goldberg all attended and, in my opinion, some [had the best looks] of the night.”

“The biggest size inclusivity announcement to hit this year was of Old Navy’s dedication to plus-sizes. Not only did the brand rework their entire marketing plan to be more inclusive, but they put sizes 0-28 in stores, in all styles. They reworked their fit chart and placed plus-size mannequins in every store. And really, they did what no other mass retailer has been able to accomplish in recent years.”

“Saucye West is one of the leading advocates for size inclusivity in the digital space, and this year, she launched her #FightForInclusivity movement to push brands to expand beyond a size 3X. It’s started a lot of important conversations and brought attention to some issues that often get overlooked, ignored, and silenced — and that’s to be commended.”

“One of the most beautiful campaigns I saw this year was Tabria Majors’ swim drop with Fashion to Figure. She literally jumped off a roof, was lifted up by a helicopter, and ended up on the beach looking like a literal goddess. It was so fun and beautiful to watch, but really, it showed that plus-size women can be more than just desirable: They can be the whole damn fantasy. Gabi Gregg’s collection with the brand was major, too.”

“If I wore womenswear, I’d literally be wearing Nina Parker’s Macy’s line every day. And even better, it’s the first Black-owned, plus-size fashion collaboration they’ve done. We need so much more of that.”

“When I heard Toccara, one of my favorite contestants from America’s Next Top Model, was going to be hosting her own competition series specifically for plus-size models, I was shook. Her return to the scene was everything we could have hoped for, and it was so great to see curves celebrated in a major way.”