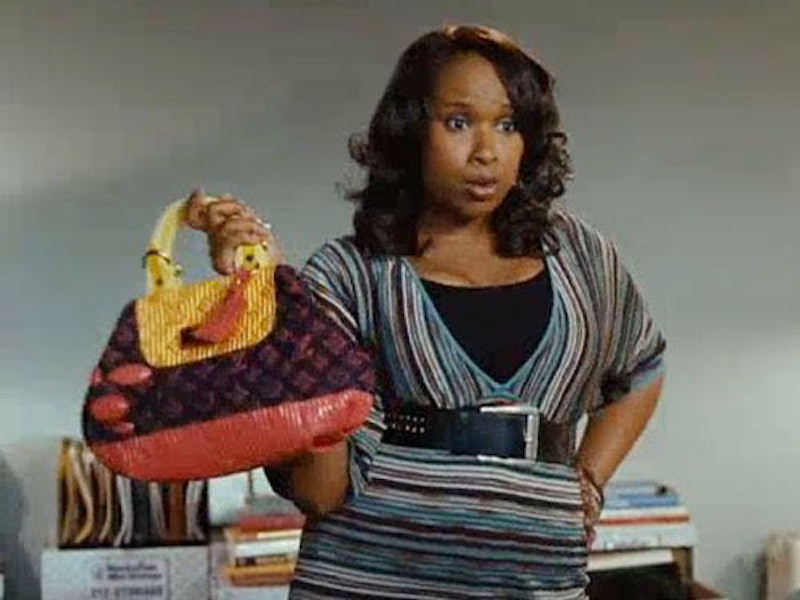 TikTok is asking the question we’ve all been wondering since 2008: What was with that bag Carrie Bradshaw gave her assistant?

Though she was a minor character in the first SATC movie, Louise from St. Louis (Jennifer Hudson) played an integral role in Carrie’s life. Hired after Carrie’s return from her would-be honeymoon in Mexico, Louise was tasked with managing Carrie’s transition back into single life.

She unpacked Carrie’s apartment, organized her closet, calendar, and inbox, set up her new phone, and single-handedly saved her failed engagement. Without her guiding hand, Carrie might never have reunited with Big, resulting in their romantic courthouse wedding and years-long marriage. And after all that, Carrie repaid her with what might be the most controversial handbag in movie history.

Like Carrie, Louise moved to New York City searching for what Bradshaw dubbed “the two Ls: labels and love.” Toting a parade of rented designer bags, Louise was ever lusting over her boss’s closet. So, when Louise quit to move home with her new fiancé, Carrie gave her a going away gift that has haunted the internet for years.

Though it was intended to be a generous and thoughtful gesture, Carrie hyped Louise up with a massive Louis Vuitton box, only to reveal a candy-colored, logo-embroidered bag that even Y2K-obsessed TikTokers might pass up on Depop.

As someone who’s famed for her personal style — specifically, her shoes and handbags — gifting an assistant a bag that Carrie herself would never wear is a strange move.

Fashion TikTok is still disturbed by the choice nearly 15 years later. Clips of the exchange are going viral, labeled as “the most traumatic moment in film history.” Watch here and decide for yourself.

More like this
15 Of Carrie Bradshaw’s Best Handbags From Sex & The City
By Dominique Norman
Attention, Millennials, Italian Charm Bracelets Are Officially Back
By Hannah Orenstein
30 Of Kendall Jenner’s Best Runway Looks To Date
By Dominique Norman
Looking Back At Kylie Jenner's Best Fashion Week Looks
By Allie Fasanella
Get Even More From Bustle — Sign Up For The Newsletter
From hair trends to relationship advice, our daily newsletter has everything you need to sound like a person who’s on TikTok, even if you aren’t.