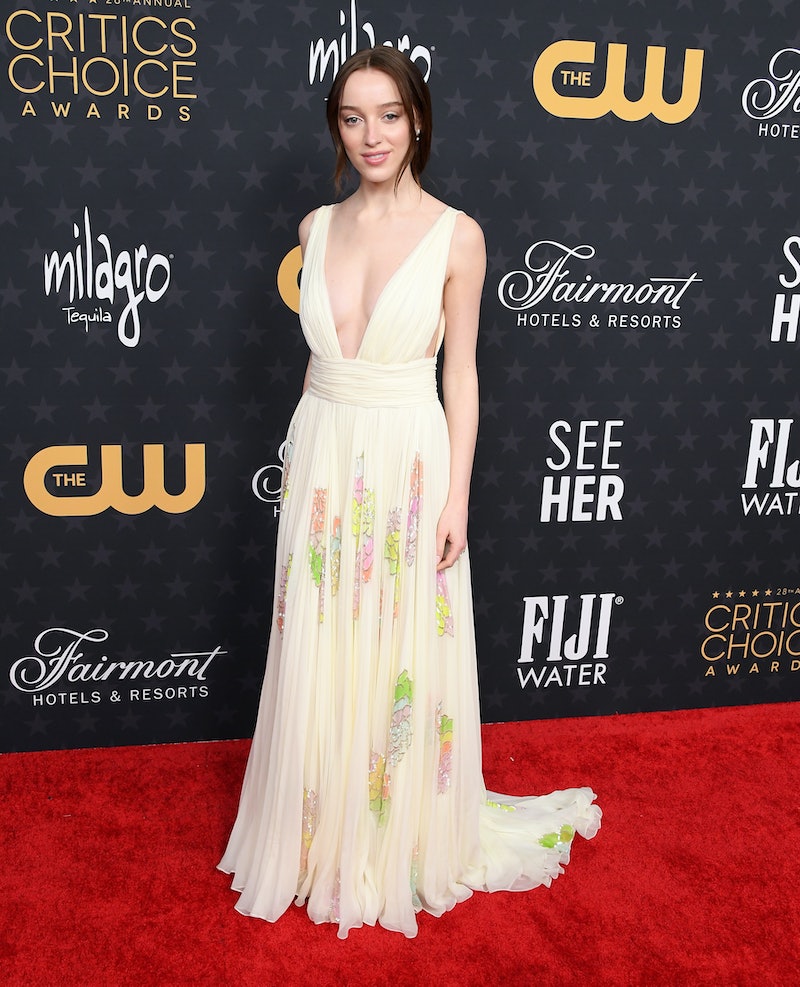 Trading Regency-era England for Ancient Greece, Bridgerton’s Phoebe Dynevor brought the florals to the Critics’ Choice Movie Awards on Jan. 15. Dynevor was in attendance to present the award for Best Actor in a Drama Series, which went to Better Call Saul’s Bob Odenkirk. The actor, who plays Daphne Bridgerton in the Netflix drama, wore a custom dress from her go-to French fashion house Louis Vuitton. Styled by Nicky Yates, the star paired the flowing look with subtle Charlotte Tilbury make-up, and wore her hair in a simple plait, with loose strands framing her face.

Bridgerton fans may well have already noted that there’s a connection between the period drama and Greek mythology. Two of the Bridgerton daughters, Daphne and Hyacinth, are both named after figures who appear in myths about Apollo and lost love, and eagle-eyed viewers have also spotted several other subtle references in the show, including the classic painting of Venus that Eloise and Penelope spot on a visit to Somerset House in season two.

The star has is a well-documented fan of Louis Vuitton. Earlier in 2023, she embraced the cut-out trend for an award season dinner, and rocked the sheer trend last year alongside many of her Bridgerton castmates.

The annual awards, held by the American-Canadian Critics Choice Association, is often regarded as an early indicator of which films and actors might storm to success at the Oscars in March, and celebrates the best of present-day film. The absurdist action thriller Everything Everywhere All At Once led this year’s nominations, and went onto win Best Picture, while Brendan Fraser and Cate Blanchett picked up Best Actor and Best Actress for their roles in The Whale and Tár respectively.

This article was originally published on Jan. 16, 2023