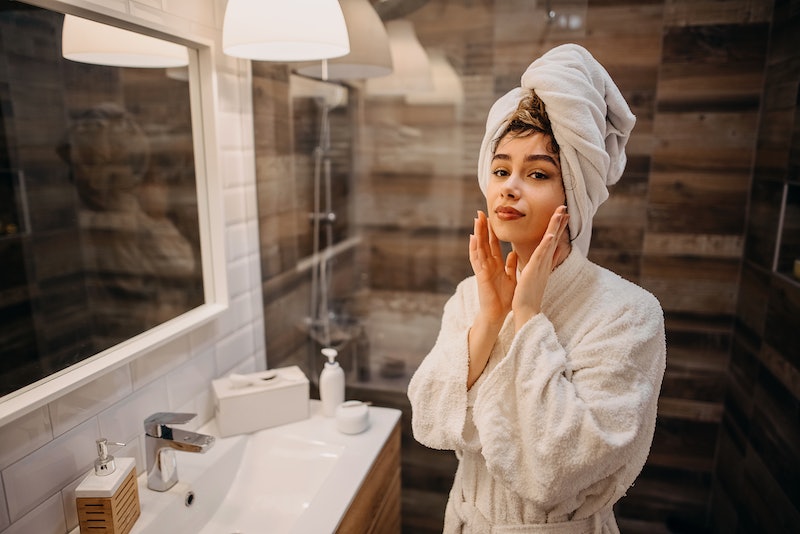 There are two types of people in the world: people who pick their faces and people who don’t. I’m someone who can’t leave a single blemish or clogged pore on my face untouched, so I fall into the former camp — despite knowing this will only make my complexion worse. Lately, I’ve been trying to mitigate the damage of the excavations I’ve performed on my face — and this is how I ended up using the Dermaflash Dermapore ultrasonic pore extractor tool.

First, a little more about Dermaflash. The brand is focused on creating long-lasting, durable tools for your skin care concerns, and right now that means two products — a namesake peach-fuzz removing, skin-exfoliating dermaplaning device (a cult-favorite that you may have heard of before) and a pore-extracting and serum-infusing device called the Dermapore.

The latter is an electronically-charged, wireless tool that’s pretty easy to use: press the power button one time to put it into extraction mode and twice to put it into infusion mode. TBH, I haven’t focused on the serum-infusing technology just yet. But for the pore modality, I’ve dived right in. After a few weeks of use, this is my honest opinion of the Dermaflash Dermapore.

How Does The Dermapore Work?

The Dermapore knocks out gunk with a one-two punch, according to Dr. Diane Madfes, M.D., FAAD, a board-certified dermatologist. “Water on the skin, in combination with the vibration, helps loosen the sebum in the pores.” The angle of the sterile spatula then brings the loosened sebum to the surface, so it can be wiped away.

It’s best to limit usage to once a week, before bedtime. “Nighttime is best so you can give the skin time to heal overnight, as well as avoid immediate sun exposure,” Madfes says.

In terms of technique, the user controls the pressure so it’s suitable for most skin types. People with eczema, sensitive skin, or other conditions should avoid the tool or check with their derms before using. Either way, you should err on the gentler side since “aggressive use can actually enlarge pores over time,” Madfes says explaining, “sebum will collect in the base and pressure can drive contents below the skin.”

Does The Dermapore Deliver?

My skin is usually okay but somewhat temperamental and hormonal. I’d say it’s mostly clear but frequently clogged around the T-Zone, and I’m not concerned about pimples so much as dullness. Occasionally, I end up with bigger whiteheads that are painful and slow to rise to the surface of my skin.

When my Dermapore arrived, I ripped it out of the box like a bat out of hell and plugged it in to charge, so I could use it immediately. Besides charging the tool, your face should be wet during the extraction process. For this reason, I decided to set up shop while taking a bath.

I propped a mirror up on the bath’s rim and covered my face in warm water. The results were... disgusting but soooooo satisfying. I started on my nose because I figured I’d see the quickest results there. The combination of the subtle, shortwave vibration and the angle of the spatula’s tip very quickly pushed out a substance that I suspected was a combination of sebum and puss.

The amount of stuff that came out of the pores in my nose was astounding, slightly disturbing, and impressive all at once. Unlike masks or chemical exfoliants, there is some real instant gratification in being able to see the bounty of your harvest.

During the process, I had to re-wet my face several times to make sure I wasn’t creating dry friction or being too abrasive on my skin. I also had a towel on hand to continually wipe the gunk off the tip of the spatula — that’s crucial to avoid potentially spreading bacteria around your face. Overall, I spent about 30 minutes doing my nose, chin, and forehead. I tried to do my cheeks, but couldn’t pull the skin taut enough to really accomplish anything — and since my skin is sensitive in that area, I didn’t want to inadvertently force a breakout.

After I was done, my skin was a little red and ever so slightly inflamed, but notably absent? The claw marks and peeled skin that commonly ensue after I go to town with my fingers.

In the days surrounding my period, I find myself having more whiteheads and painful, seemingly sebaceous bumps on my skin. Because they appear to be underneath the skin, my regular popping sprees often lead to scarring. I decided to use the Dermapore to get at these. I kept the device off and, simply using the sterility of the metal and the angle of the spatula, have been able to press out the puss without leaving behind the usual marks.

I gave my skin a rest and when I checked back an hour later, the inflammation and redness had gone down and my pores were noticeably cleaner. TMI, but there were little spots on my nose and chin that I assumed were little beauty marks — but the Dermapore taught me were really old and deeply-sunken blackheads.

Since I first laid my hands on it, I have been using Dermapore at least twice a week. So far, it has lessened the discoloration, marks, and trauma I usually experience from picking at my own face. Between that and the satisfaction of watching the gunk pour out of my pores, I’ll be using this for the foreseeable future.