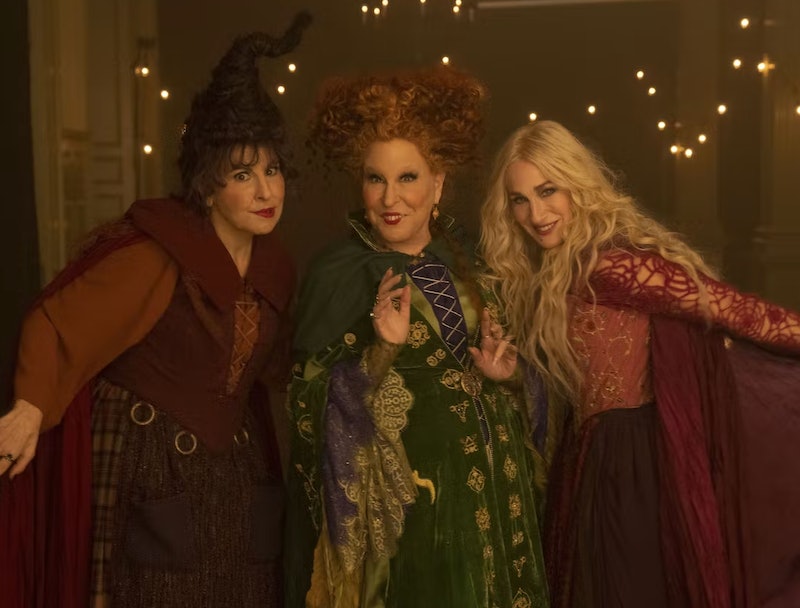 A medieval sorceress, a witchy Disney princess, and an alchemist. No, it’s not the set-up to a joke; it’s how Hocus Pocus 2 costume designer Salvador Perez described the iconic looks of the Sanderson Sister trio to Bustle.

Though the sisters Winnie (Bette Midler), Sarah (Sarah Jessica Parker), and Mary (Kathy Najimy) all turned to dust at the end of the original 1993 film, when they’re resurrected in the new Disney+ movie, they return looking almost exactly the same — apart from some specific details. Turns out, Perez added a few chosen elements to enrich the film’s visual story.

Adding deeper meaning to the sisters’ iconic looks was his main mission, taking over the reins from friend Mary Vogt who designed for the first film. Though Vogt prioritized fun over authenticity, Perez wanted to breathe meaning into every aspect of the costuming.

“I wanted them to have a backstory,” Perez said. “I wanted it to look like these symbols and traditions have been passed down through the ages — and theoretically, they will give them to the young witches who will incorporate them into their costumes if there is a Hocus Pocus 3.”

Firstly, he added Wiccan symbolism around the three moons and three goddesses to Winnie’s green coat. He also embroidered thorny branches and spider web sleeves to Sarah’s look, as an ode to her love of nature. Beyond that, he added meaning to the four rings on Mary’s corset, envisioning they’d symbolize the four elements — air, water, fire, and earth.

“Each character really has their own personality and we wanted to bring the details up so that we’re more authentic,” Perez said. “I wanted them to each have their own symbols that didn’t cross over on each other.”

Perez primarily worked from photos of the original costuming, because the Hocus Pocus outfits were on display at a Disney Villains exhibit in Oregon. Then, halfway through the process, Disney found alternates from the first film in a costume warehouse. Finally, Perez had something real to work from.

“I’m glad we got them after the fact, because I was able to play with ideas and not be so buried in making the replica that we did our own versions,” he recalled. Still, when Perez and his team got their hands on the pieces, he was shocked at how similar his designs were without being able to touch and feel the originals.

Shows like Bridgerton have contributed to the rise of regencycore fashion and the resurgence of corsets, but Perez wasn’t necessarily leaning on today’s trends to guide his vision for the film.

For Sarah’s look, he copied her Hocus Pocus silhouette. Her original corset was made with embroidered fabric, whereas Perez’s team custom-made the pattern for the corset and then embroidered the detail onto it. “I was having fun honoring the original costumes as opposed to using what is in contemporary fashion right now,” Perez explained.

With Halloween around the corner, Perez encourages fans to make the looks their own by repurposing things they already have at home. If you have a plaid shirt or skirt, you can be Mary, a wispy top gives Sarah energy, and a Swiffer Wet Jet is the ultimate nod to the Sisters’ makeshift broomstick.

“My favorite thing is to see fans make their version of it...replicating it is easy, but to make something that’s unique is the cool part,” Perez said.

More like this
Then Vs. Now Photos Of The 'Enchanted' Cast In 2007 & The Sequel's Stars In 2022
By Marina Watts
See 'Twilight' Stars Together Again For A Sweet Cullen "Family Reunion"
By Stephanie Topacio Long
'The Princess Diaries 3' May Go Ahead Without Anne Hathaway
By Darshita Goyal
Sydney Sweeney Just Revived The Iconic ‘90s Cone Bra Trend
By El Hunt
Get Even More From Bustle — Sign Up For The Newsletter