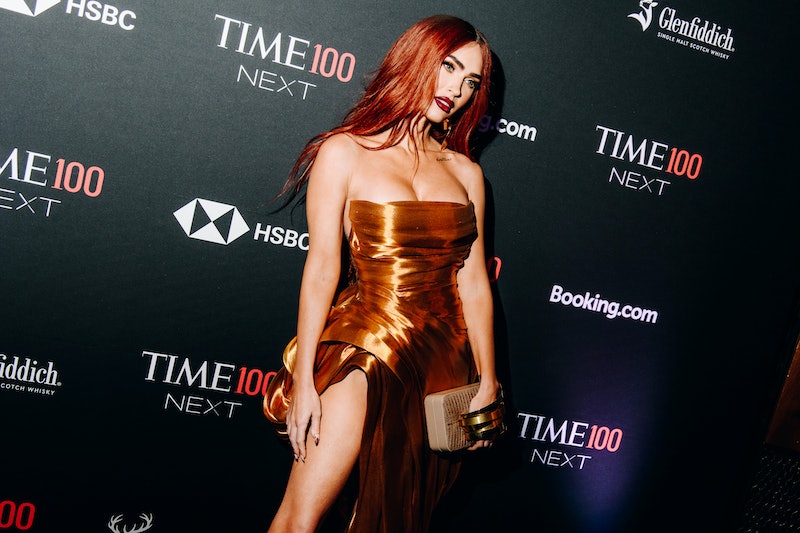 When it comes to her status as a beauty chameleon, Megan Fox’s latest hair transformation proves once more that she is, as ever, on-trend. And a style slayer who isn’t afraid to take risks. Just as we were getting used to the Jennifer' Body star’s Barbie-inspired pink hair, she sent the internet into a spin by smashing not one, but two of beauty’s biggest trends as she attended the Time 100 Next Gala last night alongside Machine Gun Kelly.

Fox debuted her head-turning red hair, courtesy of celebrity hairstylist Dimitris Giannetos, with a gleaming, gold gown, complete with a strapless bodice, dramatic train, and sky-high leg slit. The actor took to the red carpet sporting sultry, scarlet strands whose tumbling, softly styled waves made a nod to the va-va-voom of Jessica Rabbit hair. The screen siren style is part bombshell blow-dry, and part finger-waves, and understandably predicted to take over party season.

Copper hair has been a trend for quite a while now, unofficially started by Kendal Jenner when she hit the Prada runway during Milan Fashion Week, inadvertently making red hair transformations a “thing.” Since then, fiery manes have become a thing with everyone from Gigi Hadid, Shay Mitchell, and Phoebe Dynevor. Fox’s fiery take on the trend suggests, as colourists have predicted, that red hair will take on a “deeper, plusher and earthier” feel this season. “The soft, peachy blonde that was a popular throughout the summer,” David McNeil, Senior Stylist & Colour Degree Expert at Charles Worthington notes.