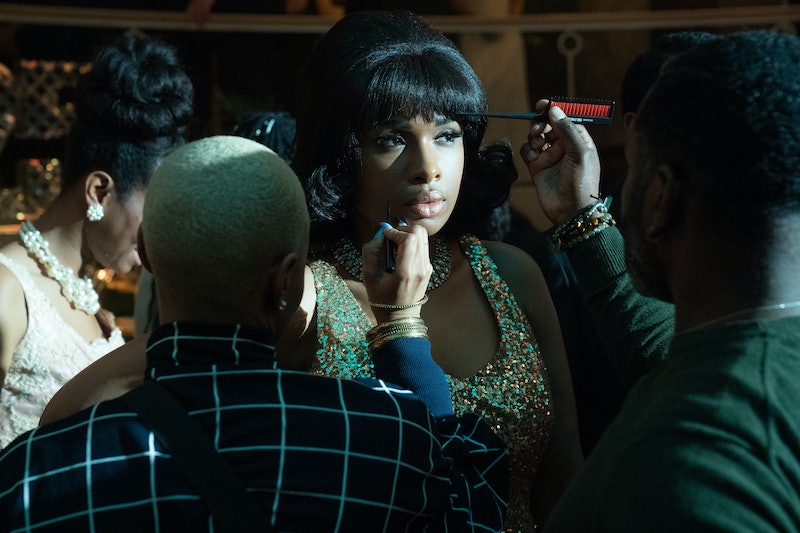 The world wept when the queen of soul Aretha Franklin passed in 2018, but — befitting an icon who sang timeless classics like “A Natural Woman” — her legend lives on. Respect, the Franklin biopic starring Jennifer Hudson — who was handpicked by the singer — was released in August. The movie opens with “ReRe” as a child in Detroit in the ’50s and ends in Los Angeles in 1972. So, naturally, viewers get to take in the best beauty looks of those decades, from bronzed lips and beehives to winged eyeliner and afros.

Throughout the film, Franklin wears a variety of updos and bouffants — all of which are among the 14 custom wigs created by the movie’s hair department head Lawrence Davis for Hudson. For inspo, Davis tells Bustle he looked at Franklin’s album covers and editorials, but also photos of historically Black churches from the 1940s, ’50s, and ’50s along with high school yearbooks to nail her younger years.

For the glam, makeup department head Stevie Martin first identified the color stories of the period as well as Franklin’s signature looks. “Aretha was known for her strong brows and her winged eyeliner,” Martin says. “She had almond-shaped nails, and she would kind of always have a gold, frosted nail color and an occasional mole when she performed.” When the film transitions into the ’60s, Martin turned to blue and green eyeshadow tones, two shades she says were trending at the time.

In Respect, the beauty looks are just as crucial as the wardrobe when it comes to propelling Franklin’s story forward. Early in the movie, a young Aretha and her sisters are getting their hair pressed by their grandmother in the kitchen. “That scene showed non-African American families how we do it,” says Davis. “It was a process, and it was bonding. I saw the dynamic between African American women — young girls and moms — at that time when it came to relationships and just having sessions where they could talk... that’s where it was: in the kitchen.”

Since the film spans several decades, Davis says he and the team took care to transition throughout the years in a way that felt authentic to the way women actually update their looks. “There’s this transition from the ’60s to the ’70s where some of them still wore bouffants, but some wore afros or were starting to wear afros,” he explains. “So, you had a little bit of the old, but you had the transition to the new.” While Franklin was belting out “I Ain’t Never Loved a Man” from high atop a stage sporting the decade’s latest ‘do and freshest makeup, there would have been older women in the crowd who were still a few years behind the curve. “That’s how America moves,” Davis tells Bustle.

Pushing on from her humble beginnings, you later see Franklin truly glammed up for the first time as she performs “Respect” at Madison Square Garden. Martin remembers that scene as one of her favorites because it was then that they got to “play with makeup,” applying fun eyeshadows and other bright lights-worthy techniques.

Then, as the film enters the ’70s, the beauty looks on Franklin become more subdued. “When we transition to the ’70s, you will see that her brows got thinner and she wasn’t focused on the makeup,” says Martin. “Then the transition to her hitting rock bottom was a raw moment.” To emphasize this, Martin replaced perfectly drawn winged liner with slept-on smudges.

At the end of the movie, though, Franklin finds herself back in church — where her career began. During the 1972 live recording of her best-selling gospel album, Amazing Grace, the singer dons a short afro and shimmery blue eyeshadow — a hue that matches her frock — sparkles across her eyelids... a beauty look that, in essence, epitomizes the icon.

More like this
The Best Beauty Looks Spotted At Paris Couture Week 2023
By Audrey Noble
11 Stunning Critics' Choice Awards Beauty Moments
By Audrey Noble
15 Modernized '60s Makeup Looks & Hairstyles That Feel Wonderfully Retro
By Olivia Rose Rushing
This Week’s New Makeup Releases & More Beauty Headlines
By Audrey Noble and Erin Stovall
Get Even More From Bustle — Sign Up For The Newsletter
From hair trends to relationship advice, our daily newsletter has everything you need to sound like a person who’s on TikTok, even if you aren’t.