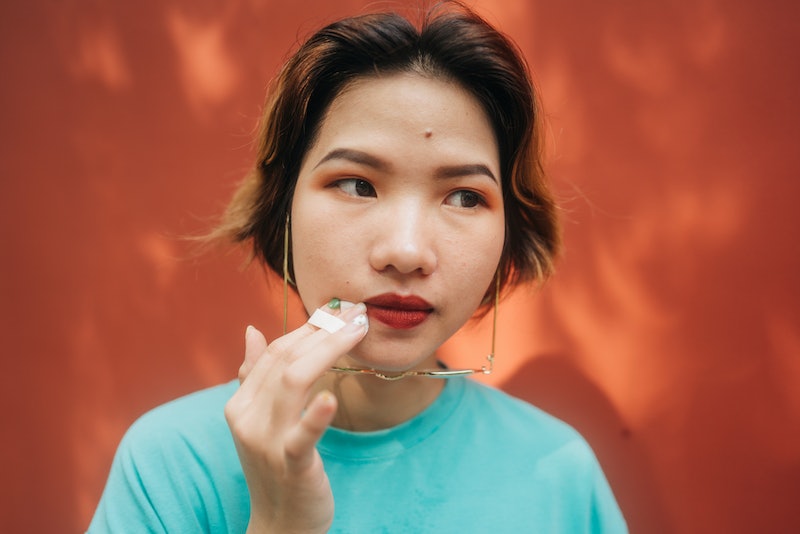 If you’ve recently upgraded your skin care routine and started breaking out, don’t panic: This could, ironically, mean that it’s working. Because, while it seems counterintuitive, product-induced pimples are often a sign that your skin is “purging.” And purging — despite its intimidating name — is not only normal, but actually helps clear your complexion in the long run, too.

When you compare skin purging vs. breakouts, there are subtle yet key differences that’ll tell you what’s behind those new zits. “Purge means to remove or get rid of something that is unwanted, and in a skin purge, the skin is cleaning itself out,” Dr. Brendan Camp, M.D., board-certified dermatologist at MCDS Dermatology, tells Bustle, noting that this process can cause blemishes to form. That said, these breakouts differ from traditional acne: They're temporary, and their presence actually signifies clear(er) skin is on the way.

Purging is product-induced, which means you may encounter the skin woe when incorporating something new into your routine. “[Skin purging] is skin reacting to an active ingredient that increases the cells’ turnover rate,” says Dr. Tracy Evans, M.D., board-certified dermatologist and medical director of Pacific Skin and Cosmetic Dermatology. “Before new healthy cells emerge, the oil, sebum, dead skin cells, and dirt need to come to the surface of the skin.” In other words: It’s the result of your skin reacting properly to an exfoliant.

Think your skin might be purging? Read on for everything you need to know about the process and how it differs from standard acne.

What Is Skin Purging?

According to Joshua Ross, celebrity esthetician at SkinLab, the most common causes of skin purges are exfoliants or any ingredient that boosts cellular turnover. This includes alpha hydroxy acids (AHAs) like lactic and glycolic, beta hydroxy acids (BHAs) like salicylic, retinoids, benzoyl peroxide, and tretinoin, he says. The purging process can also be activated after getting a facial or chemical peel, he adds.

Thus, the primary difference between a skin purge and a breakout lies in the root cause. “Skin purging generally refers to a breakout not related to traditional kinds of acne like stress, hormonal, or adolescent,” Ross tells Bustle. “Hormonal breakouts are caused by fluctuations and hormonal levels and stress, whereas purging is caused by use of products that include the above-mentioned ingredients.” To translate: Boosting cellular turnover means you’re speeding up the skin’s life cycle, so it pushes the dirt, sebum, oil, and dead skin cells out from under the skin’s surface to make room for the new-and-improved epidermis at a much faster rate than usual. It’s not unlike what happens when you get a peel (in fact, many exfoliants act as a lighter version of peels when applied topically), which can result in flaking before your fresh new layer of skin is revealed. Think of your exfoliated, glowy complexion as a caterpillar in a cocoon (read: buildup on the skin’s surface) waiting to become a butterfly.

Still, a skin purge and a standard breakout can look almost the same — which is where a few tell-tale signs can come in handy when you’re determining how to treat your skin.

While Camp notes that an acne purge can present with the same type of lesions that you may experience during a typical breakout — including blackheads, whiteheads, pimples, and cysts — there are a few key differences to watch for, such as where they appear. “If you are purging, you’ll generally purge in the same areas that you were normally breaking out because the acne cycle is being sped up, leading to more breakouts in the same area,” Ross tells Bustle, meaning that if a breakout is in the same place you’ve had pimples before, it might be a purge.

What’s more, skin purges have a much shorter duration than traditional breakouts and tend to last for a few days or up to a week, while true acne persists much longer, Evans explains. So, if you experience a purge-induced breakout, Camp advises simply taking care of your skin the same way you normally would. As in: Keep using your new product, because you’ll just have to wait it out. “The purge has a limited lifespan; it is a hurdle to overcome before you start seeing real results,” he says.

How To Treat A Skin Purge

Though it’s simply a common side effect of your skin getting used to a new product, there are ways to alleviate the severity of a skin purge. For one, Ross recommends implementing only one new product or ingredient into your routine at a time. “Wait 45 to 60 days in between before introducing others,” he says. “This way, you can see exactly what’s working for your skin and what’s not.”

Another tip? Take your time. “When using products that have the potential to cause purging, I advise patients to start using the product slowly,” Camp says. “This may mean using it every third night for a month, then every other night for a month, then nightly as tolerated.” This allows your skin to build up a tolerance and could mitigate any potential side effects, he explains.

Should you find yourself struggling with an especially pesky skin purge, Camp suggests switching to gentle cleansers and moisturizers in order to avoid irritating the skin further along with daily sunscreen to protect your complexion as it’s in a vulnerable state. Ross also encourages the use of a calming hydrating serum (think formulas with glycerin, hyaluronic acid, aloe vera, and ceramides), as it can help reinforce the skin’s natural barrier without disrupting its microbiome. So if you keep everything else calm and collected, that purging will have a better chance at finishing its job so you can get to that glow.

More like this
Your Rosacea Skin Care Treatment Guide, Straight From Derms
By Danielle Sinay
How To Reduce The Appearance Of Pores, According To Derms
By Paris Giles
The Sliced Bob Is Summer's Hottest Haircut
By Danielle Sinay
What To Know About Brow Microshading Vs. Microblading
By Danielle Sinay
Get Even More From Bustle — Sign Up For The Newsletter