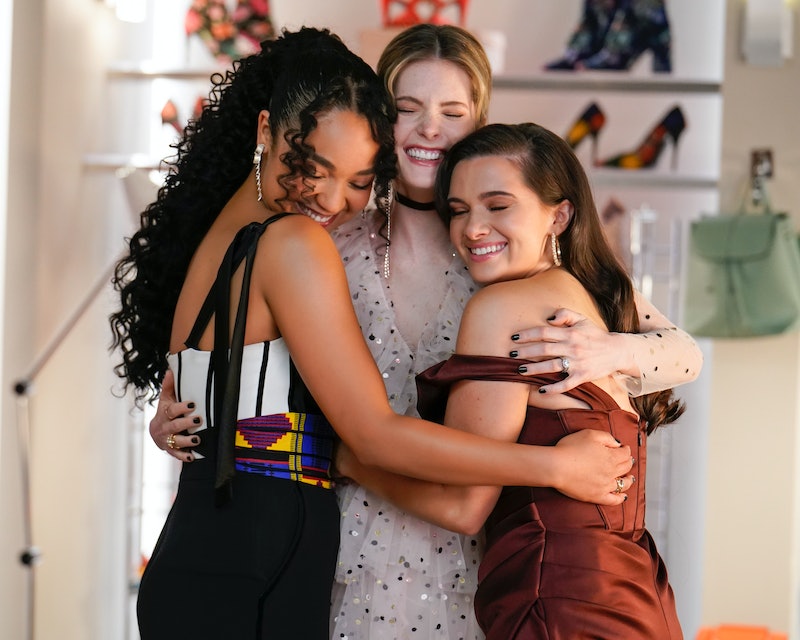 After five seasons in the fashion closet of the fictional Scarlet magazine, The Bold Type is coming to an end. Since 2017, audiences have tuned in to keep up with the glamorous — if not slightly exaggerated — lives of Jane Sloan (Katie Stevens), Sutton Brady (Meghann Fahy), and Kat Edison (Aisha Dee), all of whom are rising stars at the beloved magazine.

The chemistry between the three women is a big part of the show’s appeal, and a key part of capturing that dynamic is getting their respective styles just right, down to the very last detail.

Costume designer Mandi Line is tasked with elevating the characters’ fashion during the final season while also wrapping up their sartorial stories as the series ends. It was a challenging task for Line, since there was a different costume designer for each of the show’s previous four seasons.

“I’m going into this [thinking], ‘Oh my God, there’ve been four different designers, and I’m a fan of the show,’” Line tells Bustle. “I just owned the voice in me that said to look at the four seasons, watch them all again, and screenshot my favorites.”

Line, who was previously the costume designer for Pretty Little Liars, decided her approach would be to riff off of what she felt were the best looks from each season. And for her, there was a clear frontrunner.

“I’m such a fan of season one,” Line says. “As far as the clothes, they were strong, they were bold, they were weird, they were architectural. They really helped define the characters.”

For the final season, Line’s main goal was “to bring the realness.” Sutton, for instance, is a stylist who compromised her marriage to Richard (Sam Page) for the sake of her career. Line felt it was only natural for her wardrobe to evolve accordingly.

“What do stylists look like? Stylists look like Karla Welch, Samantha McMillen, Alexandra Mandelkorn,” Line says. “You look at the second episode, she wears these cool vintage vests, these plaid pants, these Gucci vintage shoes, and a yellow Etro blouse. [For the final season,] I made her very sophisticated and confident in who she is — she doesn’t have to try anymore, she just is.”

Even Sutton’s basics become more sophisticated as the series nears its end.

“If you look at Sutton’s jeans this season, they’re Victoria Beckham, they’re Alexander McQueen wide leg,” Line says. “But she wears them a couple times, so I tried to get to the realistic side with Sutton.”

As for social media director turned activist Kat, her wardrobe becomes more of a reflection of her personal values and passion for social causes. Line turned to the Black Designer Database, created by her friend Charlese Antoinette, to connect with Black designers who would be a good fit for Kat’s style.

“My approach was, who is Kat today?” Line says. “Kat is a strong Black woman still figuring out what she doesn’t want. She has this voice and I was like, ‘what am I going to bring to this? I need to bring heart and soul.’”

Aisha Dee was “so on board” with the effort, says Line. “Aisha was like, ‘Oh my God, this is who I am. This is what [she] wants to put out in the universe. Kat would buy Black. That’s exactly what she would do.’”

When it comes to Jane, the ambitious writer who’s being personally groomed to take over for editor-in-chief Jacqueline Carlyle (Melora Hardin), it was important to take into consideration her impending career move.

“A person who’s supposed to take over Scarlet, what does that look like?” Line says. “What does a boss look like these days?”

Stevens was inspired by celebrities like Gigi Hadid and Kendall Jenner, and Line referenced several editors of various real-life magazines and media companies. Ultimately, it came down to one undeniable fact: “There’s no more rules in the office,” Line says.

On Jane, she wanted to tone down the patterns and opt for more neutrals where possible. “I wanted them to be grown,” Line says. “We got to go bold or go home, but bold doesn’t mean wild. I wanted them to take risks, but risks in their silhouette and the pieces. It wasn’t really colors. If it was up to me, I would do black on everybody head to toe. Black is my favorite thing.”

While she wasn’t able to put everyone in all black, she did get one major monochromatic moment during the second episode of Season 5 when Jane and Jacqueline walk into the States and Nations office to confront someone about a story they’re working on together.

“Jacqueline is wearing a black Givenchy cape dress and Jane has on leather leggings, leather boots, blazer, huge Isabel Marant belt,” Line says. “And they are walking in saying, ‘I’m sexy, I’m strong, do not fuck with me.’ That was my favorite scene.”