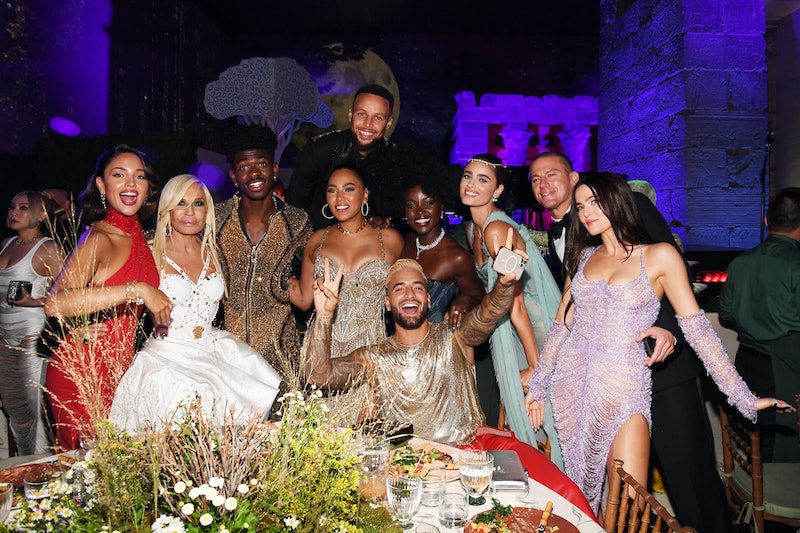 The Met Gala is an annual fundraising ball that benefits the Metropolitan Museum of Art’s Costume Institute and kicks off the opening of the Costume Institute’s annual exhibit. However, it’s become more known for its red carpet, where A-list stars like Rihanna, Jennifer Lopez, Kim Kardashian, and Zendaya show off their most extravagant looks of the year. Every Met Gala has a theme to correspond with the new exhibit that’s reflected on the red carpet, with 2022 being In America: An Anthology of Fashion, the second part of 2021’s Lexicon of Fashion exhibit.

But what happens after guests ascend the grand staircase? It’s a bit of a secret, one that slowly becomes undone every year. According to The New York Times, guests have been forbidden to post anything from the event on social media after the red carpet since 2015. But some celebs have slyly broken the rules, with guests like Kim K, Kylie Jenner, and more often posting star-studded selfies from the bathroom — the place where they’re least likely to get caught.

This year, Kourtney and Khloé Kardashian will reportedly be joining their sisters Kim, Kylie, and Kendall Jenner at the Met Gala for the first time, according to Page Six. Other confirmed 2022 guests include Katy Perry, Megan Thee Stallion, and first-timer Sydney Sweeney, who will likely be joined by more of her Euphoria co-stars. Hopefully, they’ll give fans more bathroom selfies.

After the red carpet, everyone sits down to mingle with each other over dinner and drinks. In 2021, guests were offered a chef-curated vegan menu, which left Keke Palmer hungry for more. And yes, where everyone sits is meticulously planned. Event planner Eaddy Kiernan told Vogue that she starts a seating chart the December before the gala as names start to come in and finalizes it the month before. “Our ideal pairing would maybe be two people who we think will just get on like a house on fire, but who may not even realize that they have a lot in common,” she said. “And we try to make sure someone isn’t staring into the eyes of a former flame.”

Every year, new A-list co-chairs host the soiree. In 2022, Blake Lively, Ryan Reynolds, Regina King, and Lin-Manuel Miranda are the co-hosts, taking the reins alongside Vogue’s Anna Wintour. The hosts keep the flow moving and introduce the musical performers.

One former Vogue employee previously offered Bustle a bit more insight on what happens inside. “The ‘behind the scenes’ is always really fun at the Met,” the staffer says. “A tremendous amount of work goes into the production and execution of the event, and the night always seemed to go smoothly, impressive, to say the least. The decor is mouth-dropping, the high energy is palpable, and the performances always have every guest up from their tables and dancing!”

In recent years, Met Gala performers have ranged from Rihanna, who performed for the crowd in 2015, and The Weeknd and Nas, who got guests on the dance floor in 2016, to legends like Madonna, who gave a dramatic religious performance for the 2018 Catholicism-themed gala, and Cher, the perfect choice for the 2019 Camp-themed gala. Last year, Justin Bieber performed. The performers are kept secret until they come out on stage, so 2022’s special guests are unknown.

The 2016 documentary The First Monday in May also reveals information on what goes on inside the museum, although they’re careful not to bend the rules established by Wintour. The film follows the creation of the 2015 Met Gala and exhibition, themed “China: Through The Looking Glass,” and claims that Wintour bans parsley (it can get stuck in your teeth), bruschetta (it can fall on your dress), and, dislikes when people use their phones.

READ NEXT: Everything We Know About The 2022 Met Gala

Overall, it seems like a pretty glamorous and highly fashionable event. And, despite its exclusivity, it also seems (dare we say it?) kind of fun. For those of us without an invitation, you can stream the red carpet live on Monday, May 2, on Vogue.com.

More like this
Harry Styles’ Red Carpet Looks Have One Thing In Common
By El Hunt
These Are Kylie Jenner's Best Paris Fashion Week Looks... So Far
By Dominique Norman
Nicola Coughlan Channelled 'Bridgerton' Chic At London Fashion Week
By El Hunt
Hailey Bieber Is Making Cargo Trousers Work — Here’s How You Can Too
By Catharina Cheung
Get Even More From Bustle — Sign Up For The Newsletter

This article was originally published on May 1, 2017