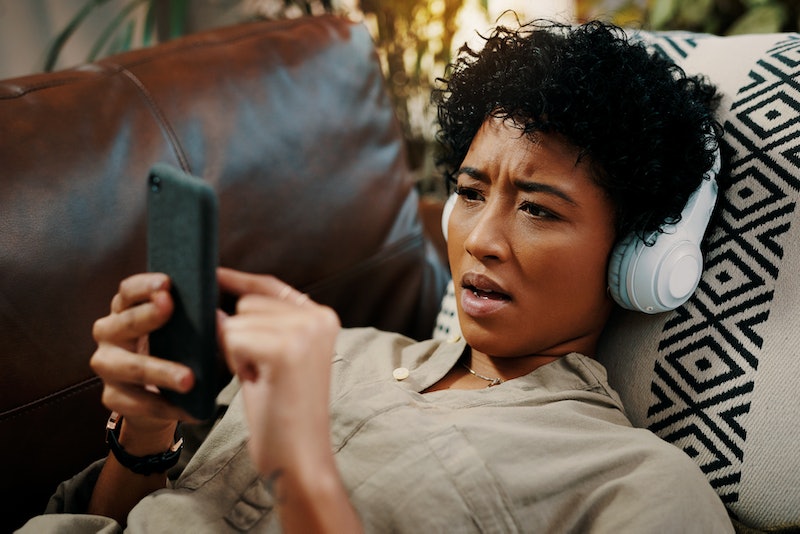 Your best friend, worst enemy, and ex's mother all agree: It sucks to be ghosted. And yet — even though we know it hurts — most of us are still willing to do it to others. When you're the one calling the shots, it always seems reasonable to simply stop texting someone back, and allow yourself to fade into oblivion. But there are much better ways to tell someone you're not interested, that don't involve disappearing.

It's a message so many people need to hear. Take this survey, for instance: The dating app Plenty Of Fish asked 800 users, ages 18 to 33, and found that 78% had been ghosted at some point. That's way too many folks left wondering if their date is OK, if they're just busy, or if they've completely lost interest — and it can really mess with the mind.

"It is unkind to ghost someone because it often leaves people to assume that the reason you were uninterested in them is because of whatever their greatest insecurities are," Amalia Miralrío, LMSW, LCSW, MSW, MEd, a therapist in private practice, tells Bustle. "Without a clear explanation of why the relationship wasn't a good fit for you, the ending can reinforce negative and oftentimes false beliefs about someone's self worth."

So let's hold onto the notion that ghosting is what flaky people do, and change things up. From now on, let's try to be nicer to ourselves by owning our desires (or lack thereof), and let's be nicer to each other by respecting the time and feelings of the people we're dating, even when we're not into them. With that in mind, here's what you can do the next time you are considering ghosting.

The moment you start thinking about ghosting someone, take time to assess the situation. Chances are, you just aren't interested in them anymore, and want to explore your other options. If that's the case, consider how seriously you've been dating, and how invested you've both become.

If you've only messaged back and forth a few times on an app, and haven't met up in person, there's zero need to offer an explanation. Simply stop responding, and move on. If you've been on a few dates, or have been hyping up a first date, be honest and let them know your feelings have changed.

And remember, it's totally fine to do so! Many people, and women in particular, tend to feel beholden to others, and fear being too honest. (Heck, you might even consider going on a date you don't want to go on, just to avoid awkwardness.) But what's the entire point of dating? To figure out whether you like another person or not, and that means rejection is part of the game.

Of course, if you assess the situation and deem it potentially dangerous, it's acceptable to fade away. "It is OK to ghost someone who you feel may be a threat to your physical or emotional safety," Miralrío says. "Similarly, if you have tried to end the relationship and the person continues to violate the boundaries you set, it is absolutely OK to stop responding to any communication."

If the issue is general incompatibility, as opposed to threatening vibes, then the person is deserving of your respect and has the right to know what went wrong. Remember, being ghosted and wondering what fatal error you committed is a lot more painful than receiving a text, even if it's of the "hey, sorry this isn't going to work out" variety.

So rejoice in the fact you have the option to send a message, and start figuring out what you'd like to say. If the person was nice, but you just weren't feelin' the chemistry, Miralrío suggests something straightforward like, "I've appreciated the time you have put into getting to know me, but I'm no longer interested in pursuing this relationship because of XYZ." Resist the urge to lie, she says, and instead offer a simple explanation as to why you'll be moving on. You didn't have anything in common, didn't feel a spark — whatever it may be!

If you aren't looking for the same things, Miralrío says, point it out by saying, "Thank you for sharing such genuine kindness and humor with me, but I am looking for someone who is ready to commit. I wish you nothing but the best." That way the other person knows they're not inherently unlovable; they're simply not the right fit for you.

And finally, if the reason you're moving on is because you met someone else, go ahead and say so. The text can read: "I have enjoyed getting to know you, but I have met someone else who is a better fit for me right now. I hope you find the right person for you!" That way, they'll know not to keep trying.

Whatever the case may be, Miralrío says it's important to be as honest as possible, so that the other person has clear answers, and isn't left to feel bad about themselves, or to wonder what happened.

3. Ask To Hang Out As Friends

Unrequited love sucks almost as much as ghosting. But if you'd like to keep this person in your life, in a platonic sort of way, Beverley Andre, LMFT, a licensed marriage and family therapist, suggests following up with a message asking if they'd like to remain pals.

She tells Bustle the best text to send is, "I enjoyed getting to know you, and would love to continue on as friends." Of course, the other person has every right in the world to request space to get over their feelings, or to express that a friendship would make them kind of uncomfortable. But in any case, you'll know you tried! Why ghost someone who could turn out to be a great friend?

It's always going to be a million times easier to simply disappear and spare yourself a potentially awkward text conversation, than to be honest. But think about all the times you've been ghosted, and do the other person the favor of ending things once and for all, in a kind and honest way.

More like this
Is It A Rebound Relationship Or The Real Thing?
By Carolyn Steber and Lexi Inks
Are Quality Time & Physical Touch Love Languages Compatible?
By Lexi Inks
7 Women Share Their Best Orgasm Stories
By Lexi Inks
12 Ways You're Sabotaging Your Love Life
By Teresa Newsome and Lexi Inks
Get Even More From Bustle — Sign Up For The Newsletter

This article was originally published on Sep. 1, 2015