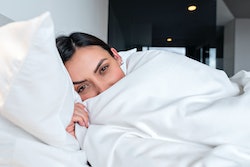 Basically, the only thing that's touching you is air, which means this sex toy is super quiet, as well as gentle — if you want it to be. You can pump up the intensity, too, and even take it into the shower, since it's also fully waterproof.

For a slightly different model, go for the Pro40, which is the latest and greatest from Womanizer. All of that said, as someone who considers herself an expert when it comes to sex toys, allow me to share with you seven more reasons you should give The Womanizer a try.

Truth be told, if I’m stressed or need a sexual release, I can usually come pretty fast. While studies have found that it takes roughly 15 to 20 minutes for a woman to orgasm, I usually do it under 10. However, with The Womanizer, I tend to hit the spot in less than four. (Yes, I timed myself for the sake of this article.)

While the company's internal research team found that more than half of users experienced an orgasm in less than one minute, and 80 percent took between two to three minutes, I’d say less than four isn’t bad, especially when you're short on time.

But even if you aren't in a rush, or don't end up orgasming that fast, this is still a sex toy worth experimenting with, just for the sake of that aforementioned suction.

Speaking of, where The Womanizer differs from other vibrators, and sex toys in general, is that it sort of sucks at your clitoris, but in a soft way that’s enjoyable. Again, it's all thanks to the Servomotors, which create a really unique sensation.

The Womanizer also offers the option to start slow with a lighter intensity level (there are five to choose from), and then you can increase it as need be, creating an even deeper suction feeling that stimulates in all the right places. (Heck yes.)

3. The Possibility For Multiple Orgasms Is High

Due to sucking nature of The Womanizer's technology, you can quite easily stimulate your nipples in a way that won't rattle your entire boob area. It ends up feeling a lot like someone is gentling kissing or sucking on your nipples, which is a pretty nice addition to the solo sex experience.

But even if you don't typically think much about your nipples, it's worth trying this toy on various other body parts, just to see what you end up liking.

5. You Can Use It With Your Partner, Too

Whether you sleep with men or women, you can use The Womanizer on your partner, too. For men, try using it to stimulate the frenulum, which will make it feel like you’re down there working hard with your mouth, but it’s just The Womanizer doing its thing.

While there are plenty of rechargeable sex toys available, as opposed to battery-powered, it’s always nice when another one comes on the market. Spending time digging through a side drawer for a pair of AAAs can really kill the mood, not to mention the cost of having to constantly buy new ones adds up fast. Toys that only need to be charged? That's always the way to go.

7. It Comes With Its Own Travel Case

One of the charming side benefits of The Womanizer is that it comes with its own travel case. It isn’t much bigger than one you'd use for sunglasses, and it zips right up so you can easily stash it in your bag. It also includes pockets inside for the silicone head, as well as a small bottle of lube.

While we may not be traveling a lot these days, knowing you can easily carry The Womanizer with you is a welcome bonus. It's just another one of the many great features of this game-changing sex toy — one I'll definitely be adding to my rotation.

More like this
7 Women Share Their Best Orgasm Stories
By Lexi Inks
Expert Tips For Being On Top When You're Plus-Size
By Lexi Inks
How Do I Deal With Both ED & Premature Ejaculation?
By Sophia Benoit
Are Quality Time & Physical Touch Love Languages Compatible?
By Lexi Inks
Get Even More From Bustle — Sign Up For The Newsletter

This article was originally published on Sep. 17, 2015