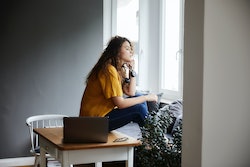 On many of those occasions, it was because I was coming out of a relationship and orgasms were the furthest thing from my brain. Or because my depression flared up and, again, orgasms weren't exactly on the top of my to-do list; just getting through the day was hard enough.

Although I never think I'm going to get agitated from sexual frustration, it does happen. During week two, the slightest thing gets on my nerves. I’m also antsy — like I have an itch I need to scratch, but just can’t. In fact, it’s not just that I can’t scratch it, but it also feels like I’m not even sure where that itch is.

For me, it all comes out in my writing. It’s during this week that I plan to write not just one book, but five books, and my mind goes a mile a minute as I write down ideas and chapters for this book or that book, and I come up with titles for these chapters and books that I think are brilliant and poignant, and I can’t stop writing! I’m a genius! I’m the greatest! They’re going to give me awards and medals! They’re going to change the name of the Empire State Building to Chatel Tower in my honor!

It’s during week four that, without fail, I have an orgasm during a dream. If you’ve never had an orgasm in your dreams (this would qualify as a mental orgasm), here's what it's like: It wakes you up a bit, and you realize you’re having an orgasm without having to do anything.

For me, these wet dreams are never the result of a sex dream. Instead, they’re the result of dreams in which I’ve smelled something that turned me on and ended up causing an orgasm. I’m not sure what this means, the fact that my orgasm is brought on by a scent I can only smell in my dreams. But hey, who really cares if it’s a free, effortless orgasm?

More like this
35 Sexy Texts To Send Your Partner
By Griffin Wynne and Carolyn Steber
What’s An Open Relationship, Actually?
By Lexi Inks
I Want More Sex But My Partner Has ED. What Do I Do?
By Sophia Benoit
How Getting An Abortion Has Changed From The ’60s Through Today
By Amanda Chatel
Get Even More From Bustle — Sign Up For The Newsletter

This article was originally published on Jan. 20, 2016