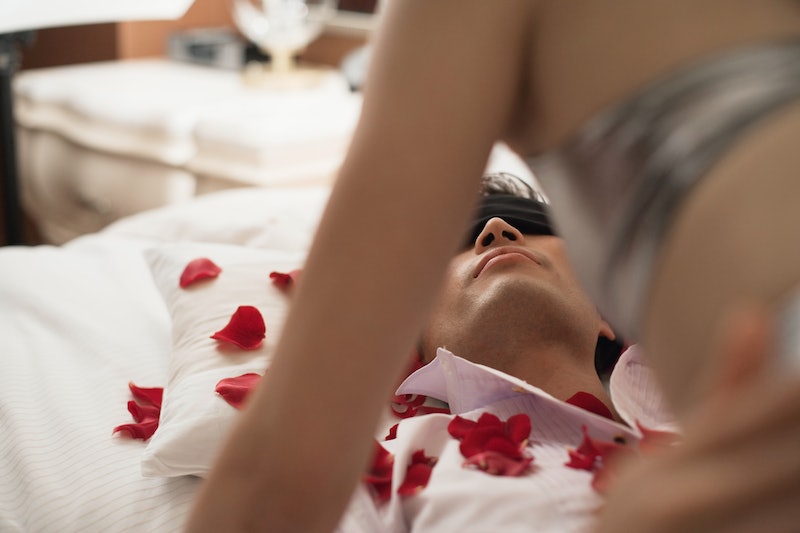 We’re always hearing that we could be having better sex, a better orgasm, or a better relationship. But how often do we hear the nitty-gritty of how we can actually better understand our deepest desires and most embarrassing questions? Bustle has enlisted Vanessa Marin, a sex therapist, to help us out with the details. Now, onto today's topic: sexy domination and submission games to play in the bedroom.

Q: “I've read your guides on asking to be dominated and dominating someone, but I was hoping you could give more specific suggestions of power play games that we can play together. My partner and I have already talked about the fundamentals like safety, consent, and boundaries, and we’ve played around with domination sex in some pretty tame ways. We’re looking to up the ante and try something more intense. Do you have any ideas for roleplaying or bondage games?”

A: Thanks for the question! There are so many different ways to play around with domination and submission. Below, you’ll find 13 suggestions for Domination/submission games to play. Keep in mind that domination and submission are pretty wide categories, and mean different things to different people. Some of the games on this list might sound really hot; some may feel like they cross the line. Talk through each of these suggestions together and see which ones seem safe and sexy to the two of you. Of course, don’t forget to keep talking about boundaries and safewords. You can’t play these types of games unless you and your partner are great communicators who are willing to talk about the ins and outs of sexual safety!

One of the easiest ways to play around with Domination and submission is to spend an entire evening catering to the Dom. The sub’s attention is solely on their Dom. The sub might set up the room in a way that would please the Dom, give a full body massage, dress up in the Dom’s favorite sexy outfit, perform oral sex, or allow the Dom to choose exactly what they want in each and every moment. The sub gets no attention of their own.

Here’s a really simple game to play when you’re just starting to ease your way into Domination and submission. It’s not even really a game so much as a set of rules that the sub has to follow:

For those of you who haven’t yet had a conversation about your boundaries, here’s a sexy way to open one up. Have the sub make a list of everything they’d be willing to do for their Dom. Think about it in terms of how the sub could show prove their subservience to their Dom (of course, don’t forget that the sub still gets to have their own boundaries). Include sexual things, like, “allow my Dom to penetrate me anally” or “allow my Dom to wake me up in the middle of the night to have sex.” The sub can also include things that aren’t explicitly sexual, like, “I will wear a collar during the day” or “I will do chores around the house.”

Punishment is one of the fundamentals of a Dom/sub relationship. It’s one of the simplest but most effective ways of taking your Dom/sub relationship up a notch. In the same way that beginner subs can get started making a list of ways to prove their devotion, they can also make lists of forms of punishment that they’ll accept if they get out of line. Here are some ideas of ways the sub could get punished:

6. Master May I Come

You can play a variant on the aforementioned game by forcing the sub to ask the Dom permission to orgasm. If you orgasm without permission, you’ll get punished (see below). The Dom can be extra sneaky by trying to get the sub to orgasm, but not giving them permission to do so.

This game can be played in a single day, or on an ongoing basis. The Dom assigns their sub certain chores to do. Examples might include, “spend 30 minutes performing oral sex,” “scrub the entire floor on your hands and knees,” or “make a meal.” Depending on how intense you want to get, the Dom can give their sub certain criteria about the ways the chores have to be done. For example, the sub might need to perform the chores wearing a special outfit. Or there might be a set timeline that the sub has to finish the chores within. The Dom can even perform an inspection to make sure the chores have been done properly.

If the Dom is feeling generous, they can let their sub know about specific rewards they’ll get if they complete their chores on time and in the proper fashion. For example, the sub might get to have an orgasm, or they might get a present.

The Dom can exert even more power over their sub by creating “rewards” that have a catch. The sub can get their reward, but they will still have to perform some task or punishment at the same time. For example, the Dom can allow the sub to take a break and watch TV, but only if, say, they keep a butt plug in the entire time.

Another fun way to play around with chores and rewards is to come up with a points system. The Dom can assign a certain number of points for specific chores or tasks. Then they can assign points for certain rewards. Just like at the fair, where you have to get a certain number of tickets to win specific prizes, the sub can work their way up to getting the reward of their choosing. This is a great beginners game, since the sub can have a lot of say in what they do.

Not everyone is into restraints, but they can be an incredibly sexy way for the Dom to showcase their dominance over the sub. The Dom ties their sub down, immobilizing their hands, feet, or both. This can be done with a restraint system, bondage tape, or bondage rope. The Dom gets to be in control of when the restraints get removed.

There are an endless number of ways you can roleplay Dom and sub roles. Playing certain roles can release some of your inhibitions, and make it easier to get into the Dom/sub dynamic. Here are just a few ideas:

If you want to experiment with what it’s like to take on Dom and sub roles outside of the bedroom, schedule specific times that the sub will be available to their Dom. It might be certain dates, or a certain block of time each day. Come up with your own specifications for what it means for the sub to be “ready”. For example, the sub might have to be prepared to be penetrated at any time. Or they might be expected to sit quietly until given a command.

Have fun, and remember that if you embark on any bondage games it's crucial to have a conversation around safewords and boundaries first!

More like this
My Partner Wants Me To Wear A Diaper During Sex. Help!
By Sophia Benoit
18 Hinge Prompt Answers To Try If You’re Looking For Something Casual
By Lexi Inks
12 Active Date Ideas That'll Get You & Your Boo Outside
By Lexi Inks
50 Valentine’s Day Instagram Captions To Post If You’re Single
By Jessica Booth, Lexi Inks and Carolyn Steber
Get Even More From Bustle — Sign Up For The Newsletter
From hair trends to relationship advice, our daily newsletter has everything you need to sound like a person who’s on TikTok, even if you aren’t.