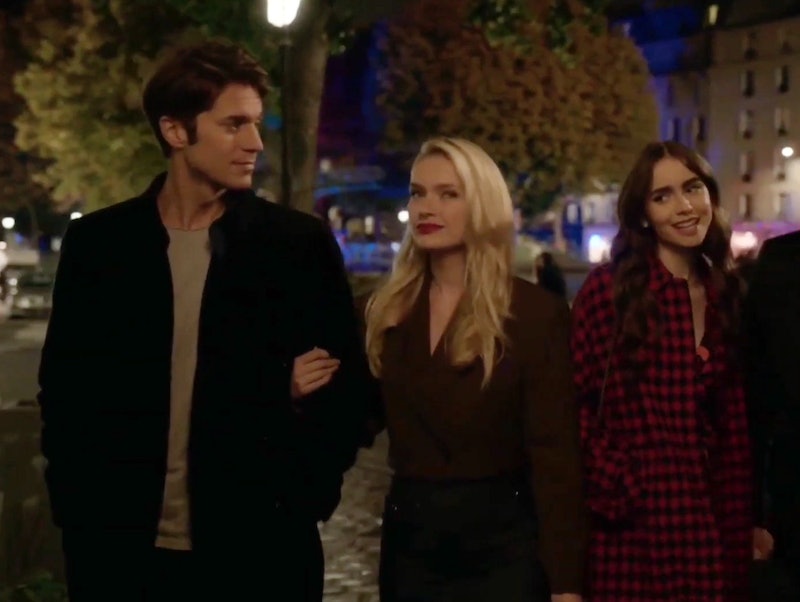 Violet, 32, was sitting down for dinner across from her new partner when her eyes suddenly landed on his wedding ring. It was the fourth time she'd gone out with this seemingly single guy, who, on this particular night, forgot to hide the fact he was actually married.

"His ring definitely wasn't there on any of our other dates," she tells Bustle. But it did immediately explain his odd behavior, like why he dodged getting-to-know-you questions and why he'd been whisking her away to the darkest tables in the back of restaurants.

She took a deep breath and confronted him. "He was so embarrassed. And he admitted he was unhappy with his wife," Violet says. "I suggested he consider therapy and said there was no way I'd ever be OK with dating him." She got up, called a Lyft, and had his number blocked before the car even arrived.

Like Violet, many others have come to the realization the person they're dating already has a partner, and they've been lying about it the entire time. On Netflix's Emily in Paris, a similar scenario occurs: After flirting in their vestibule, sharing romantic breakfasts, and passionately making out, Emily finds out Gabriel, her sexy neighbor, already has a girlfriend.

According to a July poll of 283 Bustle readers, 46% said they'd been the person someone cheated with, and 21% said they had no idea their new partner was "taken" or that they were the "other person." As folks in this situation have found, it's tempting to blame yourself for "accidentally cheating" with someone or getting in between two people, because the emotional impact is so similar to that of intentional cheating.

"Most people cheat because they are not getting their needs met," Dr. Michael Stokes, LMHC, a licensed mental health counselor and sex therapist, tells Bustle. "These needs are sexual, emotional, etc." And many find it easier to fulfill them outside the relationship, instead of approaching their partner and having a potentially difficult conversation.

"It was rude to his girlfriend and a waste of my time and energy."

This was the circumstance Kiera, 29, found herself in when she started dating someone she met on Bumble. "We went on a couple of really well-planned dates, including a Childish Gambino concert," she tells Bustle. "He did a great job of 'wooing' me and not trying to go home together on the first few dates."

Almost immediately, she suspected he wasn't just polite and respectful but strategic in getting his own needs met. "At first, he claimed we couldn't go back to his apartment because it was 'undergoing construction,' which I thought was strange," Kiera says. Then, four dates in, he admitted he was still living with his girlfriend but that they'd broken up.

Kiera says the timeline between when they had their first date and when he supposedly ended things with his partner definitely overlapped. And that it was clear he had his own interests at heart. "He wanted a parachute to cushion his breakup," she says. "I didn't appreciate him wasting my time and using me as a buffer. It felt like he was a bit of a desperado, needing insurance that if he broke up, he'd have someone else. It was rude to his girlfriend and a waste of my time and energy."

Kiera called things off, which is exactly what Stokes recommends doing once you realize the person isn't actually single. But he warns it can take an emotional toll, just like any other breakup sparked by cheating. "You'll probably feel betrayed, angry, hurt, and sad," he says. "You'll need time to process."

"I felt dumb for not knowing."

That said, sometimes painful "accidental cheating" scenarios can result in a happy ending. Jennifer, 34, had been dating her partner for a few months when she got a Facebook message from a girl she knew in high school. "She told me I was dating her sorority sister's boyfriend," she tells Bustle. "I had posted a picture of him, and she recognized him."

Suddenly, all the little red flags that'd been waving up until that point made sense. "He always moved my things that I'd left at his house. He would sometimes go missing or not call me back when he said he would. And he hadn't asked me to be his girlfriend," Jennifer says. "I confronted him, and he admitted that when he met me, he was still in a relationship."

He'd broken up with his previous girlfriend once he started dating Jennifer, but because of the overlap, she decided it was best to take a break. "I felt dumb for not knowing," she says, and the phrase "once a cheater, always a cheater" was ringing in her head. But Jennifer ultimately decided to trust him. "I called him a few days later and told him I wanted to keep dating him," and the two immediately got back together.

Jennifer says she's happy she didn't let hurt feelings get in the way because the two have now been married for 12 years and haven't once dealt with infidelity. "It’s interesting because he expected me to not trust him, so when I did trust him, he had to learn to trust me."

More like this
21 Signs You're Not In Love Anymore
By Sara Altschule, Kathleen Ferraro and Carolyn Steber
Breeding Kinks Have Been On The Rise Since Roe V. Wade Got Overturned
By Lexi Inks
30 Clever Ways To Slide Into Your Crush's DMs
By Griffin Wynne, Carolyn Steber and Lexi Inks
6 Dating App Tips To Try If You're Looking For A Serious Relationship
By Lexi Inks
Get Even More From Bustle — Sign Up For The Newsletter