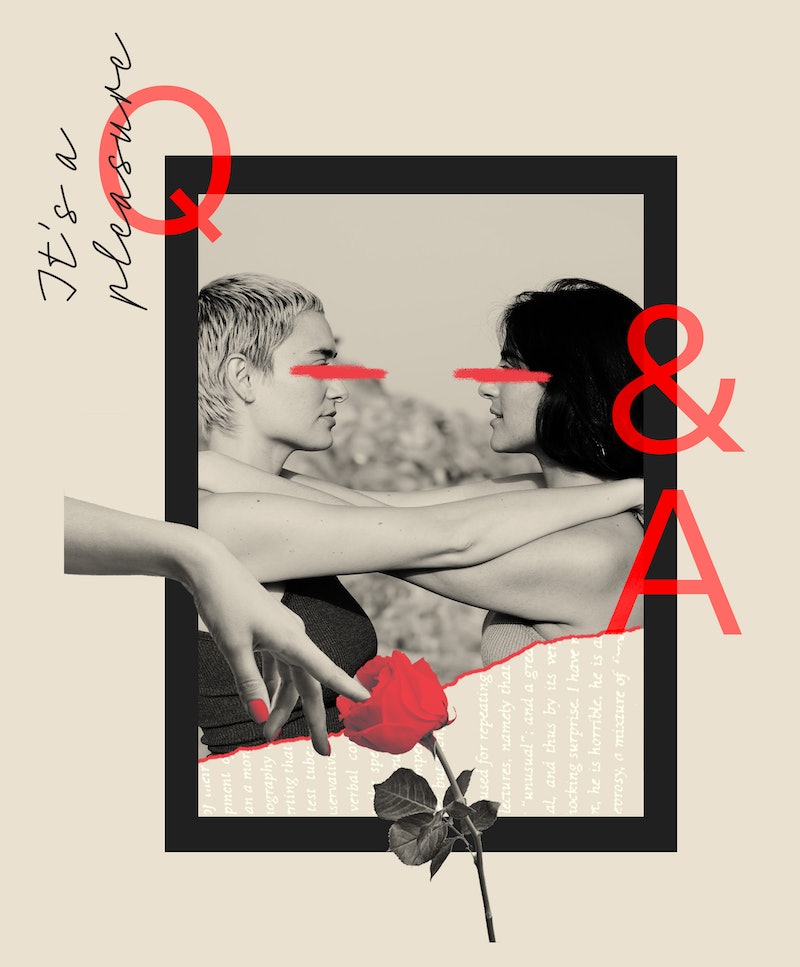 Nuria Seguí/Stocksy
By Sophia Benoit
May 26, 2022
It's A Pleasure

Q: I've been in a relationship for the past four years. Everything is good and we’re happy where we are right now. But I met this woman from work, and we hit it off right away. She approached me assuming I was single, so I told her about my relationship. She understood but still flirts with me playfully sometimes. She’s very open about her crush on me at times. I feel very drawn to her and we have a lot to talk about. We've been talking on video calls lately, at least once a day. We also text each other a lot. Unfortunately, I've been contemplating breaking up with my boyfriend to get with her. I just feel so bad to even think about something like that. My boyfriend is the sweetest guy in the whole world and he has done absolutely nothing to deserve this. I cannot break his heart, it would kill me. I'm just so confused about what to do, and I keep thinking what if these feelings resurface much later when it's too late to do anything. What if I'm actually meant to be with this woman because we just “get” each other? I definitely feel a connection — she makes me feel good. I also love my boyfriend so much, he has been nothing but a saint to me. I just feel like I'm the worst girlfriend ever to even think about breaking up with him for someone who I literally only met two months ago. What am I supposed to do?

A: The bad news is that I cannot tell you the right thing to do. There is no One Correct Option here. There are lots of paths you can take, and some of them will be incredibly impactful, sure, but at the end of the day, wherever you go, there you are. It’s still going to be a life of joy, sorrow, boredom, thrill, bad farts, late-night dancing, and missed flights. Whoever you choose to be with now is a piece of that, and likely a very large piece of that, but there is a limit to what another person can make your life become.

One of the most frustrating truths of long-term monogamy is that the one person you’ve chosen to be with is just that: one person. They are, to misquote the great philosopher Kesha, who they are, day in and day out. Yes, people change a bit and love changes a lot, but at the end of the day you are with one person and you are also only one person. You only get one life. Monogamy makes you confront your finitude, which, frankly, sucks *ss. It would be so cool to live and love forever and get 25 years with someone, 57 with another, two years with a couple of other people just to try them out, a lifetime with your one true love, and a weekend with a guy who goes by “Razor” for some inscrutable reason. But life means making choices and choices mean losing out on certain things. Instead of confronting that head-on, many people like to ignore that fact as often as possible until they reach a crisis. Sometimes it’s meeting someone new that makes you thrill a little. Sometimes it’s quitting your job to open a pawn shop. Sometimes it’s buying a breeding pair of Samoyeds. Anything to feel alive! Anything to feel like there’s still time to pivot! Anything to feel.

I say all this because I think — and I could be wrong! — that this woman provides you with a ton of escape and excitement. She’s giving you attention, flirtation, and novelty. To be clear, those things feel wonderful. Why wouldn’t you choose to feel like you’re sneaking out of a fancy hotel to dance in the rain? Well, I would argue that you choose not to for the bullsh*t reason (and believe me when I say it’s bullsh*t) that you promised someone else you wouldn’t. I know! I know!! I know. On its face, it’s an incredibly silly reason to not experience this high, the high of someone new wanting you.

The truth is, though, that monogamy isn’t about preventing you from having fun. That’s not the point or purpose of it, and it shouldn’t feel stifling or chafing — or at least not often. It’s about a longer arc. It’s about picking one person (for now, even if not forever), even with the limitation that they are only one person and cannot possibly ever go up against what your imagination can create. Fantasies of life with other people will always win out against the reality of one person. But the act of love is showing up, even when you’re bored or done or less interested than you were two months ago. Love is trusting that the feelings of love and lust will come back around in new and different ways. Love is realizing that almost everything is a phase that passes and some are great and easy and some are hard and sh*tty. (I also want to note that monogamy isn’t the only way to love people, nor is it the one correct way. A lot of people practice nonmonogamy and it works wonderfully for them. Wanting to date someone new but not have to break up with your partner is not a reason to try nonmonogamy.)

None of this is to say that I think your current boyfriend is and must be The One for you simply because you already “picked” him and now you owe him fealty. That, I assure you, is not the promise of monogamy. The promise is not to never fall for someone else or want someone else. The promise isn’t to stay hitched to someone even when it’s bad and never change your mind, not even for one moment. The promise is to try and to show up again and again and be open to falling in love with them again. And it can end! You may find that your relationship does need to be over, even if it was fantastic and right for you at one point. Breaking up doesn’t negate the value of a relationship. No matter what comes next, what you had with your boyfriend was and is good.

But please, don’t end things with him simply because you’ve become enamored with the idea of someone else wanting you in a new way. Because that part will fade. New love is like a roller coaster, exciting because of its anxiety. No one wants to be on a ride forever. Old love, or not-brand-new love, is much more like coming home and putting on a cozy pair of socks, which of course does not live up to the thrill of rolling and coasting. It’s lovely that you feel a connection with this person; what a joy that that feeling is possible with a new person. You are, however, playing with fire, which is not fair to the life you’re building with your partner.

If you choose to stay with your partner, please stop interacting with this woman. Not because she’s some seducer or anything like that. It’s rather disrespectful for her to flirt knowing you’re in a relationship, but the truth is, you have shown her that you don’t respect your relationship either, which is why you feel OK flirting back and not stopping her. (Feeling bad about something you’re doing wrong doesn’t earn you any extra points. You’re still doing it.) The reason I say you have to cut her off is as a show of commitment to your relationship, an acknowledgment of how serious the flirting with her was. (You were thinking about leaving your partner for her!) In order to have a good relationship after something like this, a person who does the cheating or almost-cheating is the one who needs to maintain vigilance, watch themselves, and create strong boundaries to prevent any lines from being crossed. It’s completely unfair to continue this knowing that you’re considering leaving. Lastly, I think you should stop interacting with her to close the door firmly on the possibility. The possibility is what has been so alluring about all of this. In fact, it’s exactly what she’s offering you: the fantasy of a different life. It’s not evil to have had a crush on someone while you’re in a relationship, but it is cruel to continue to entertain it and flirt with her while keeping your boyfriend around as a backup option. Stop texting her, stop flirting with her, and do something hot and fun with your boyfriend.

If, however, you think that this is some grand sign that your boyfriend isn’t right for you — I don’t think so, but I don’t know how things feel with him — then you need to walk away from him now. Again, I don’t ever encourage anyone to leave one partner and then immediately get into a new relationship. You will have learned nothing and made no changes to how you approach partnerships or how you understand yourself. It’s like burning one cake and then putting the next one right in the oven for the same time at the same temperature. I don’t think being with her is going to solve the problem that monogamy gets boring sometimes and that sometimes a person comes along who feels sooooo good to get attention from.

More like this
I'm 38 & Single. Why Can’t I Find A Serious Relationship?
By Sophia Benoit
My BF Wants To Stay Friends With His Ex Primary Partner. What Do I Do?
By Sophia Benoit
What Are Swingers? Everything You Need To Know
By Lexi Inks
35 Sexy Texts To Send Your Partner
By Griffin Wynne and Carolyn Steber
Get Even More From Bustle — Sign Up For The Newsletter